Shanghai Salvage Company (SSC) have been appointed for the wreck removal of the X-Press Pearl off Sri Lanka.

Singapore-owner X-Press Feeders said a contract for the wreck removal was signed with SSC on 2 December and the salvor had established a project team and mobilised the necessary equipment.

The owners had previously said the wreck of the X-Press Pearl was resting on the seabed at a depth of 21 metres with wreck removal delayed until after Sri Lanka’s southwestern monsoon season from May – September. 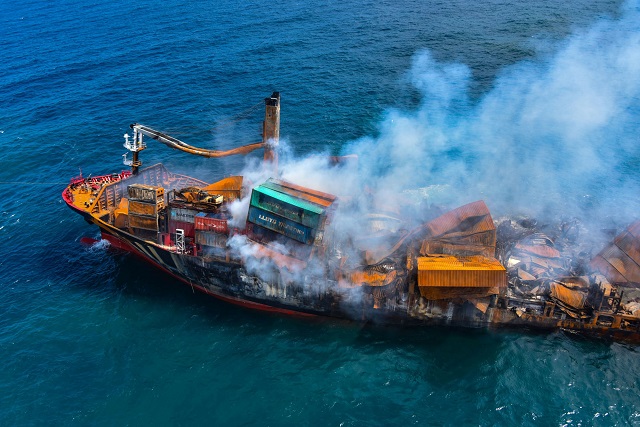 “The wreck removal team will be supported by response tugs on a 24-hour watch to deal with debris or forms of pollutants. Regular water sampling will be ongoing at the site, with representatives of ITOPF and Oil Spill Response ready to respond immediately, if required,” X-Press Feeders said.

The X-Press Pearl started to sink on June 2 after a container fire burned on the vessel for two weeks. Explosions were reported from the vessel in late May. The crew were safely evacuated, with two crew hospitalised for leg injuries.

Resolve Marine has recovery of the containers and debris that were lost overboard during the vessel fire and sinking.

The ship’s Russian Master was arrested and released on bail on suspicion of committing offences under the Marine Pollution Prevention Act. Eight crew members remain in a hotel in Colombo and have not been allowed to leave Sri Lanka since the casualty.

X-Press Feeders said it continued to with the Sri Lankan authorities towards the repatriation of the eight remaining crew.

Meanwhile the Sri Lankan authorities have submitted their second compensation claim. X-Press Feeder said the claim was, “being reviewed by the vessel owners P&I Club and discussions are ongoing”.