Famed British foreign correspondent, television producer, and presenter Simon Dring has been an adoring soul-mate for Bangladesh and our people since 1971.

He died today in a Romanian hospital after a cardiac arrest at the age of 76. Dring’s death has led us in Bangladesh to an ocean of tears.

“Dring, revered as a “true friend” of Bangladesh, also covered the horrors of the country’s war of independence from Pakistan in 1971. He was among about 50 foreign journalists confined to their hotel, the Intercontinental, in Dhaka on Mar 25, 1971.”

On the night of 25th March, 1971, when the terrible Pakistani armies carried out their “Operation Searchlight” killing mission to annihilate the Bengalis from their own homeland, Simon Dring was hiding inside the Hotel Intercontinental from where at that time reported that “In 24 hours of killing, the Pakistan Army had slaughtered as many as 7000 people in Dhaka and up to 15,000 people in all of Bangladesh. 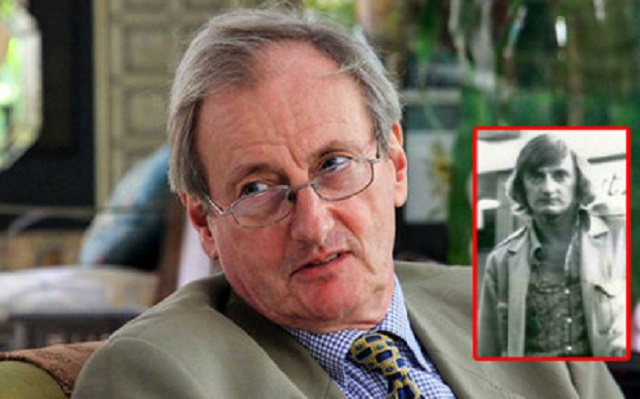 His news report then shook the entire world which aroused strong sympathy for people of Bangladesh.

The deadly battle went on for nine long months and by the end of it, three million Bengalis had been killed.

But many news reportsby Simon Dring and other journalists brought about 1971 Bangladesh Genocide committed by the terrible Pakistani armies and their local mango-twigs, particularly Jamaat-e-Islami mass-murderers to light around the world.

Whenever we confront a non-restrained or controlled desire, we are surely in the presence of a tragedy-in-the-making.

The regimes of military dictators – Zia, Ershad and their compadreKhaleda are the pictures of depravities. During their rise to power and regimes, decadence reigned supreme. These are the people of malevolent and intentional transmitter of the virus of philosophies of medieval darkness and the 1971 defeated forces stemming from evil characteristics or forces; wicked or dishonorable into a valiant nation.

They are the ghosts and goblins whose appetite for debauchery is insatiable. They are soiled with dirt or soot and harshly ironic or sinister deserving or bringing disgrace or shame to the nation. Sitting in a languid, dirty power parapet, these rat-bags carried out satanic activities.

They created a world that is irredeemably sordid, where neither beauty nor charm nor intelligence nor our glorious liberation war spirit had any value. Dirt, debauchery and the most unbridled course of vice and cruelty reigned supreme.

Born in 1945, Dring began his career in journalism as a feature writer with the Bangkok World Newspaper. He would go on to report the start of the Vietnam War, acting as a reporter for Reuters and other news organisations.

He later held positions at the BBC and The Telegraph, reporting from Biafra, Bangladesh, Eritrea and many other countries.

Dring was on the plane that brought Ruhollah Khomeini from Paris to Iran after the Iranian revolution. He was injured several times in the course of his duties and was imprisoned in Uganda by Idi Amin and threatened with execution.

In 1997, Dring joined partners in Bangladesh to found Ekushey Television (ETV), the first private terrestrial television operation in the country, by bringing together a team of over 50 reporters, producers and editors.

Dring, managing director of the Ekushey Television station, left Bangladesh in 2002, after the government led by the then Prime Minister Khaleda Zia issued a deportation order. ETV got a licence under the previous Awami League government.

Within two years, ETV, with a staff of nearly 400 people, grew to become the biggest and most successful network in the country, attracting a national audience of more than 40 million, and many more internationally through its satellite transmissions. It was also financially profitable, with an annual turnover of US$12 million, growing at the rate of 30% per annum and creating jobs for more than 5,000 contractors. However, its considerable success was also its downfall and, despite national and international protest, elections in 2002 saw a new government move quickly to shut down ETV by the end of that year.

Immediately after the Khaleda administration came to power, ETV faced a difficult time. The validity of its broadcasting licence was challenged by supporters of the ruling coalition. The Supreme Court cancelled the licence in 2002 after lengthy legal procedures. Ekushey Television went off the air the same day, after the government shut down its transmission facilities.

At the time, ETV insisted that its news and current affairs coverage was neutral and objective, but the ruling Bangladesh Nationalist Party believed it was biased against them.

Before his departure, Dring was given a farewell reception, at which many of Bangladesh’s leading cultural personalities were present. Dring told the audience that it was the second time he was being deported from Dhaka.

In 1971, during the Bangladesh war of independence, he was deported from Dhaka along with other western journalists who were reporting on the atrocities carried out by the Pakistani army in the then East Pakistan.

As a journalist Simon John Dring stayed secretly and disseminated information to the world about the genocide and the Liberation War that lasted 9 months and in which 3 million Bengali people died. In return for his bravery, he won several awards for his contribution and was later solemnly recognized as a citizen of Bangladesh.

Simon John Dring was born 11th January 1945 in Britain.  He has worked for Reuters, The Daily Telegraph of London, and BBC Television, Radio News, and Current Affairs, covering, over 30 years, major stories and events, including 22 wars and revolutions, around the world. He also has a wide range of experience in many areas of television broadcasting development and management and has designed and produced global television events.

Dring got his first media job in early 1963, at the age of 18, working as a proofreader and feature writer for the Bangkok World newspaper in Thailand.

In 1964, at the age of 19, Dring was a freelance reporter for the London Daily Mail and The New York Times in Laos, before moving to Vietnam at the end of 1964, where he covered the war for two years for Reuters as their youngest staff correspondent at the time.

His journalistic career continued through the 1970s, 1980s, and 1990s as a staff correspondent for Reuters, The Daily Telegraph, and BBC TV News, as well as a freelance reporter and producer for, among others, The Sunday Times, Newsweek, and BBC Radio News. During this time,Dring covered major stories and events throughout Europe, Africa, the Middle East, Asia and Latin America, including Vietnam, Laos, Cambodia, India, Pakistan, Bangladesh, Iran, Nigeria, Angola, Uganda, Eritrea, Cyprus, Israel, Brazil, Croatia, Bosnia, and Georgia

In 1994, at the age of 49, Dring repeated the journey again for an 8-part TV series of the same name for BBC Television and the Discovery Channel. He was accompanied on the six-month journey by Director/Cameraman Ron Orders, Recordist/Cameraman Sean Carswell, Production Manager Dan Laurie (Simon’s nephew), and Production Co-ordinator Michelle Smith. They covered 29,000 kilometres (18,000 mi) in a Jeep and a Land Rover. Dring wrote a book to accompany the TV series, ‘On The Road Again: Thirty Years On TheTraveller’s Trail To India’ in 1995, which was published by BBC Books.

During hischequered career, Dring has received many Awards, Commendations and Honours, especially, UK Reporter of the Year – for his eyewitness accounts in The Daily Telegraph of the massacres in Dhaka at the start of the Bangladesh Liberation War in 1971.

Deeply saddened to have heard of revered Simon Dring’s demise. He leaves behind his partner Fiona McPherson, and three daughters. My endless respect must go to him! And our deep condolences are to his family.