In Colombo city alone, where 30% of the country’s population resides, UN Habitat estimates that half of Colombo’s residents dwell in illegal settlements or in houses designated as unsuitable for human dwelling.

Going through the newspapers, or its newest face –the e-paper- a super-rich citizen could be forgiven if he/she is forced into the idyllic belief that our thrice-blessed country has but single problem –COVID-19.

Our rulers are focused on how many doses of vaccine have been doled out and percentages of the population, which have been vaccinated.Others in positions of authority deem it their business to denigrate voices who present a different point of view. 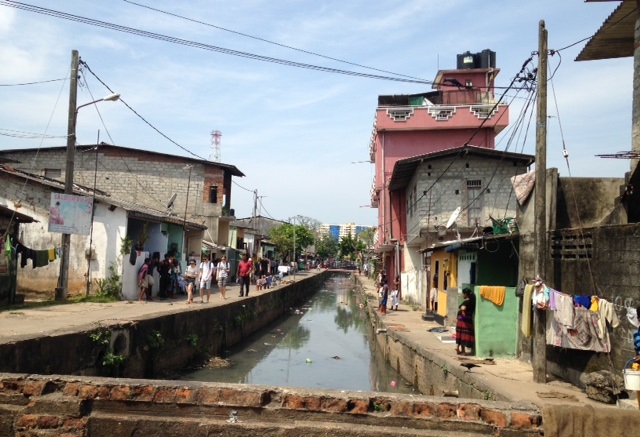 Our military commander and armed forces are running the war against the Covid-19 pandemic. This despite it’s limited knowledge of the subject and despite there being a number of virologists among the leadership of the ruling SLPP coalition.

Professor TissaVitarana –a specialist virologist by profession- is seemingly missing in action.

Our president brought into power on a wave  of popularity based on his tenacity which led to the successful conclusion of the ‘War on Terror’ and his attempts to change Colombo into a greener and more people friendly city, seems to be missing out on a number of ongoing problems.

For instance, out of the over 6 million families in Sri Lanka, only around 5.2 million live in houses with modern amenities. Around 800,000 live in the inner cities or city slums as theyare derogatively referred to. These unfortunates live in conditions, sans running potable water, sewerage and electricity in extremely cramped spaces.

In Colombo city alone, where 30% of the country’s population resides, UN Habitat estimates that half of Colombo’s residents dwell in illegal settlements or in houses designated as unsuitable for human dwelling.

According to World Bank estimates, more than half of Colombo’s residents live in illegal settlements or in houses designated as unsuitable for human habitation. Slums or ‘wattas’ in Sinhalese, occupy the central, northern and northeastern parts of Colombo; the living condition of these wattas is one of inadequacy. Thirty percent of families do not have proper access to drinking water and the city’s pipe network only covers 56% of the low-income urban areas. In the north of the city, only 51% of the districts’ households have access to the city’s sewerage network.

Today, nearly one million people live on private tea and rubber estates. Most of them in barrack-style line rooms,with a house area of 10 x 12 sq ft.The British built most of these lines in the 1920s. More recently single houses have been built for estate worker families, but the numbers constructed has not made a significant difference to the numbers living in these line rooms.

According to statistics produced by government itself, around one-and-a-half million of our citizens lost their employment during the lockdown of March 2020. Most of these unfortunate are among those dependent on a daily wage. We are once again in the midst of a lockdown and the government has lengthened the period of lockdown.

In turn this means, the families worst affected (those who lost employment) are unable to feed themselves and their children. They are literally being driven into the hands of moneylenders to keep the wolf from the door.

Sadly, even the state-owned banks do not see this portion of the population as being creditworthy. With nowhere to turn to, they end up in the clutches of loan-sharks.

Educational programmes have come to a standstill.Some among our parliamentarians are wont to speak of the commencement of zoom classes and virtual education via the internet.

Unfortunately, the reality is that over seventy percent of our children do not possess facilities to access zoom or virtual classes.

It appears these kidsare being groomed to be the hewers of wood and drawers of water to the elite in society.

As if this situation was not bad enough, most mercantile/private firms have cutemployees wages by between 35 to 50 percent. For reasons best known to it, government has permitted employers to reduce wages of workers.

To top it off while the cost of living keeps rising by the day, wages of those at the bottom half of the social ladder are falling.

Governments are elected to power to solve problems. Not to wring their hands and pray to the almighty.

Does our government have a plan to solve these pressing problems somewhere in the near future?

If they do, why do they not take the people who voted them into power into confidence and let them hear it.

This is the least the people can expect.