The KDU bill has provoked widespread protest from the academic world.

The aphorism ‘road to hell is paved with good intentions’ may well apply to the Gotabaya government’s disastrous performance, despite its claims of acting in good faith. President Gotabaya Rajapaksa, hailed as the ‘doer’ and ‘Terminator’ (for wiping out the LTTE insurgents), continued to falter in delivering the “vistas of prosperity and splendour” he promised before the election. 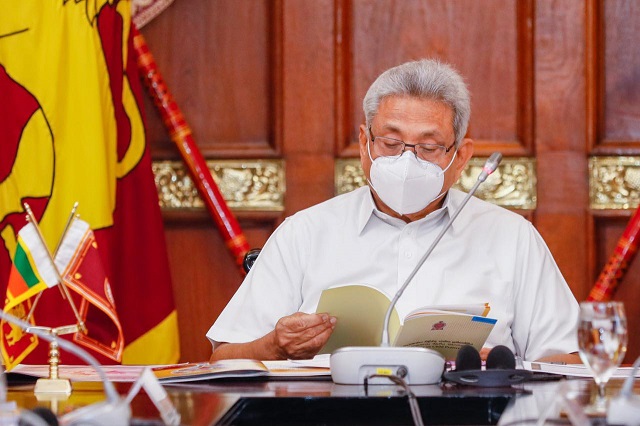 Obviously, one reason is the continuing Covid-19 pandemic that hobbled much of the ‘Terminator’s endeavours. The unrelenting run of pandemic infections crossed the 300,000-mark during the month. However, the small consolation is, the daily average of 1504 new infections during the month, was 47 percent of the highest average reached on May 26. Tourism industry, foreign remittances and export trade crippled by the pandemic are yet to recover. This has affected the livelihood of the people, sending the cost of essential commodities shooting to the skies.

But neither the pandemic nor existential issues of the people seem to deter the President from introducing some of the drastic measures, ostensibly for shoring up the sinking economy and create an environmentally friendly society. These include banning the import of chemical fertilisers to popularise use of organic fertilisers, ban on import of phones and automobiles, which have made life difficult for the citizen.

President Gotabaya is already running the country with handpicked military officers heading oversight committees and occupying administrative posts. He has also pardoned military men convicted of criminal acts and dropped cases against armed forces personnel who were being prosecuted for such acts. This has raised widespread suspicion of militarisation of the administration under his leadership.

Under these circumstances, it is not surprising the Kotelawala Defence University (KDU) Bill to be introduced in parliament in August, is seen by many as yet another militarisation effort. This time it is the haloed precincts of academic education. The bill aims to turn the KDU, a military training institution for officer cadets and officers, into a full-fledged university. It envisages the admission of civilian students also to pursue studies in law, engineering, management and medicine. It will be governed by a military-heavy board, with five serving members of armed forces in the nine-member board of governors. The wording of the Bill indicates the university will be run like a military institution. The KDU will function on its own, unlike 16 universities of the country which come under the Universities Act of 1978.

The KDU bill has provoked widespread protest from the academic world. The Federation of University Teachers Associations (FUTA), the Ceylon Teachers’ Union (CTU) and the Inter University Students Federation (IUSF), one of the powerful student bodies in the country, have voiced their strong opposition to the Bill. Earlier in the month, police came down heavily on a protest against the KDU Bill by the CTU members. Some of protestors were arrested by the police for violating Covid-19 health regulations, provoking complaints of misuse of health regulations.

The economy is limping along from crisis to crisis. During July, it was yet another doomsday prediction from Moody’s, global debt rating agency.

It placed Sri Lanka’s unsecured debt ratings under review for downgrade. It was “driven by Moody’s assessment that Sri Lanka’s increasingly fragile external liquidity position raises the risk of default.” The Finance Ministry called Moody’s action “unwarranted and ill timed” as it was working overtime to meet the settlement of $1 billion worth of International Sovereign Bonds (ISB) maturing towards the end of the month.  However, Sri Lanka said it had completed the groundwork towards the settlement of the maturing ISBs. Capital Market Minister Nivard Cabral, said Sri Lanka has proved all the doomsayers and sceptics, globally and locally, wrong. “The settlement also cements the fact Sri Lanka continues its unblemished reputation of honouring its debt,” he added. But Sri Lanka will have to move from one financial crisis to another for quite some time it seems.

The US State Department’s report on investment climate in Sri Lanka made dismal reading. It said, “Sri Lanka is a challenging place to do business with high transaction costs, aggravated by an unpredictable economic policy environment, inefficient delivery of government services, and opaque government procurement practices. Investors noted concerns over the potential for contract repudiation, cronyism, and de facto or de jure expropriation. Public sector corruption is a significant challenge for U.S. firms operating in Sri Lanka and a constraint on foreign investment. While the country generally has adequate laws and regulations to combat corruption, enforcement is weak, inconsistent, and selective. US stakeholders and potential investors expressed particular concern about corruption in large infrastructure projects and in government procurement. The government pledged to address these issues, but the Covid response remains its primary concern. Historically, the main political parties do not pursue corruption cases against each other after gaining or losing power.”

It was in this murky atmosphere, Basil Rajapaksa, younger brother of the President and fifth member of the Rajapaksa clan, was sworn in as Finance Minister. Basil is said to be the chief strategist of ruling Sri Lanka Podujana Peramuna (SLPP) and already heads almost all the Presidential Task Forces ranging from economic policy to environment and essential services. His induction as a Minister only formalises his powerful political role he is playing behind the scene. The fact Basil is a US citizen, holding dual Sri Lanka citizenship, apparently does not seem to bother anyone, not even the opposition.

The newly inducted finance minister in his speech in parliament is said to have made fun of his new office by referring to himself as a finance minister with no finances. It is a statement of fact and he has the difficult task of presenting a politically acceptable budget. The Sunday Times hinted at government sources saying that “informal contacts had been made with different sources to raise funds.” There was also the “likelihood of a visit to Colombo by an important foreign dignitary where more funds from his country are expected to be discussed”. Meanwhile, in his first official move, he is bringing a bill to provide amnesty to those holding funds in foreign banks, if they repatriate them to Sri Lanka before December 31. If they disclose taxable money, they will be protected from investigation or prosecution.

But President Gotabaya seems to be pragmatic that he would not be able to achieve his goal of economic prosperity in the present term. While speaking to heads of state-run and local media houses on his priorities, the President said he would have five more years to achieve his goals, hinting at seeking a second term in office. This has set speculation mills in motion, particularly as it came a fortnight after Basil was anointed as a cabinet minister. Even a second term in office may not be enough for the President to clean up Sri Lanka’s problems galore: ethnic reconciliation, new constitution, accountability for human rights violations etc.

In this context, Albert Camus’ words from The Plague comes to mind. He said: “On the whole, men are more good than bad; that however, isn’t the real point. But they are more or less ignorant, and its that we call vice or virtue; the most incorrigible vice being that an ignorance that fancies it knows everything and therefore claims for itself the right to kill.”

Sri Lanka seems to be caught in this “incorrigible vice”, from which it may not be able to come out easily.  [July 31, 2021]

[Col R Hariharan, a retire MI specialist on South Asia and terrorism, served as the head of intelligence of the Indian Peace Keeping Force in Sri Lanka 1987-90. He is associated with the Chennai Centre for China Studies. E-mail: [email protected]