There never could be any resistance to the ban on chemical fertilizer on the part of the poor farmers who are vulnerable to kidney disease due to drinking water contamination caused by chemicals, provided that an effective organic substitute is made available. However, this is not the time to introduce a total ban

To be, or not to be: that is the question:

Whether ‘tis nobler in the mind to suffer

The slings and arrows of outrageous fortune,

Or to take arms against a sea of troubles,

And by opposing end them? ~ Hamlet in Shakespeare’s Hamlet

The initial two year period of Gotabaya Rajapaksa’s presidential term has been largely wasted through no fault of his. The general public know this truth. At the beginning, the MPs of the overwhelmingly rejected yahapalanaya, instead of assisting the then minority SLPP government formed after his election in November 2019, threw a spanner in the works by refusing to pass the ad hoc appropriation bill for securing the funds needed for conducting normal civil administration until a new parliament was elected. I for one don’t think that the voting public have forgotten how the failed yahapalanites spurned the clearly expressed public will on that occasion and tried to scuttle the progress of the fledgeling government in order to get the parliamentary elections indefinitely postponed so that their own electoral prospects would brighten as the government’s would proportionately darken due to its inability to function freely. When the unexpected global corona pandemic hit Sri Lanka soon after his inauguration, president Gotabaya was able to contain it with the assistance of the dedicated health and security personnel. But now, the government is floundering in a sea of troubles, principally due to decisions made for him by advisors who are after goals contrary to his Vision of Prosperity. 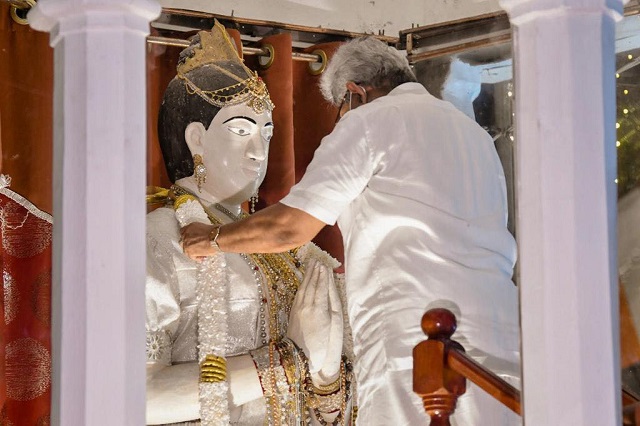 President Gotabaya Rajapaksa was reported as having said the following at a ceremony to mark the Sri Lanka National Science Day and Science Week in parallel with the World Science Day held at Temple Trees on November 10, 2021. To me, it appeared that, while making these remarks, he was not addressing them to the people sitting in front of him on that occasion; but rather, he was soliloquizing in the imagined hearing of the people who elected him as president:

“It was because of the failure of five years of (Yahapalanaya) that I was elected to this post. But they (the Opposition) speak as if nothing happened during the past two years under my rule.

“To change this system, people ought not to bring back into power the old group if they fail to deliver what you expect of them, be it me, ministers of my government, or MPs. Look for new ones. I don’t know how to do that, though. If we do something good, it is necessary for everyone to cooperate for the sake of the country. That is the duty of the Opposition. We don’t have enough funds to invest in development. We need to bring in foreign investment. A country like ours cannot do without foreign direct investment. We don’t have enough resources. We cannot achieve any progress unless we do these investments.

“We had to adjust to a new normal as a result of the Covid pandemic. It’s shameful that when a new normal is announced, they go on demonstrations or hold meetings. Is this what is needed under a new normal? This will lead to a new outbreak of the pandemic. Then we’ll have to close the schools again, and the country, too. Even the Opposition should think about these things.” (The above is my free translation of the president’s words.)

I see this as an obviously unintended dramatic soliloquy in which the president reiterates by implication his sincere commitment to the pledges he has given to the public. What  he almost literally says is that he won’t try to get elected to power again, if rejected in case he fails to deliver the promised results like the previous unsuccessful yahapalana government. Detractors read the president’s words as a confession of guilt for having (allegedly) misled the public by offering false promises or as an admission of failure. In my opinion, both interpretations are baseless, considering the constitutional roadblocks placed on the path to recovery by the yahapalana dominated parliament just before its dissolution by the newly elected president, and the severity of the economic issues resulting from the global corona pandemic. Whatever is happening now, the country owes the brightening prospects of the arrival of a younger, less self centered generation of rulers to the achievements as well as the defects of the shared leadership of the two brothers Gotabaya and Mahinda Rajapaksa. The ouster of the latter in 2015 in spite of his successful performance during his two terms was facilitated by his own lapses as a politician and a person which, being so well known by now, need no elaboration. Those deficiencies are even more brazenly in evidence than ever before.

President Gotabaya’s problem is not a straightforward existential dilemma of ‘to be, or not to be’ that racked young prince Hamlet’s brain. It is definitely less life threatening or less fateful than the latter’s uncertainty. Gotabaya’s concern, instead, seems to be more mundane: it is about whether to maintain the illusion of the macho image of himself that the success of his performance as defense secretary during his brother Mahinda’s presidency (2005-15) persuaded his admirers to conjure up in their minds; or whether to betray his feet of clay by reversing the earlier, apparently ironclad, policy decisions that he committed himself to under different circumstances. Relaxing, where necessary, his personally preferred military rigidness, in my opinion, is the need of the hour. Real or perceived lack of flexibility in the current situation (barring instances where leniency is not possible such as drug busting operations) is likely to wrack the boat that circumstances have made it his lot to skipper.

On an earlier occasion (opening of the new Kelani Bridge, November 6, 2021), president Goyabaya expressed his determination to fulfill the pledges stated in the Vistas of Prosperity and Splendour manifesto. He described in some detail what the government had achieved amidst numerous odds stacked against it especially due to the unprecedented and unrecognized corona pandemic that dealt a severe blow on the country’s economy. These achievements were deliberately ignored by the opposition, whose policies when in power led to a critical downturn in the economy. He stressed that he worked according to a plan, from which would not deviate, come what may. He also said he was capable of forcing the cultivators to use organic fertilizer as through military coercion, though that is something he would never apply; he would never violate the country’s democracy for any reason.

Actually, there never could be any resistance to the ban on chemical fertilizer on the part of the poor farmers who are vulnerable to kidney disease due to drinking water contamination caused by chemicals, provided that an effective organic substitute is made available. However, this is not the time to introduce a total ban, in view of the looming food scarcity predicted by experts. A drop in crop productivity during the switchover is inevitable. It will affect not only rice production, but vegetables, tea, coconut etc. I for one feel that, at least a large enough proportion of fertilizer provided should be of the accustomed chemical origin. Or the chemical fertilizer use could be subjected to a scientifically calculated phasing out period of gradual elimination involving the application of more and more organic with  less and less chemical fertilizer, particularly for food crops. Priority must be given to production of food for domestic consumption, though producing organically grown food for export could be more profitable in terms of foreign exchange earnings. In any case, the organic food production industry must be rescued from the reigning mafiosi. People would not blame the president if he turned his hawk’s eye on them and the emerging criminals who trade in soil and rubble mixed with chemicals, pretending it to be organic fertilizer, and hanged one or two as a warning to others who may be thinking of following their example.