These were vociferous public protests against some of the key decisions of President Rajapaksa.

Frank Sinatra in his smooth, melodious and pugnacious style of delivery described how a strongman would want to accomplish his tasks: ‘Doing it my way’. This American singer and actor, considered as being the greatest musical artist of the 20th Century, is said to have sold over 150 million records worldwide. And ‘Doing it my way’ was one his favourites. 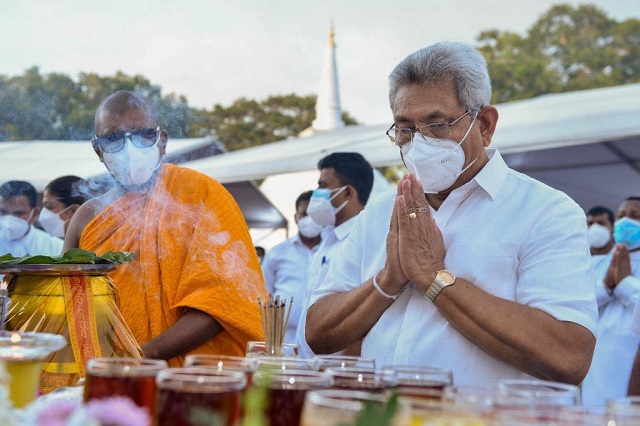 Even in millennia before to the present day, history reveals that world conquerors — big and small — are pushed by their inner compulsions to ‘Doing it my way’.

The first post-Independent Sri Lankan strongman was Junius Richard Jayewardene. Soon after he swept the polls in 1977, parodying Napoleon on ‘Rolling up the map of Europe’ declared that he wanted to ‘Roll up the electoral map’ (of Sri Lanka) and created a constitution that gave him full executive power with a five-sixth majority backing in parliament.

JR was an open Conservative rightist and in the Cold War that divided the world into a pro-American bloc and a pro-Soviet bloc, he was unabashedly pro-American. This earned him the epithet of Yankee Dickey.

But when JR unwittingly locked horns with the Gandhis who held sway over India at that time and India landed a ‘Peace Keeping Force’ in Lanka much to the surprise of JR, America could not help him directly due to geopolitical reasons. President Ronald Reagan, another tough talking politician, enabled the creation of an Israeli Interests Section in the Colombo US embassy helping the JR government to some degree in procurement of armaments and training of personnel to fight the LTTE.

In June 1984, JR was on an official visit to the United States and was accorded a dinner by President Reagan at the White House. We recall — and we hope our memory still has not dimmed — that Frank Sinatra was also a guest and JR through President Reagan requested Sinatra for his song; ‘I did it my way’. Sinatra sang it in his inimitable style. This would surely have warmed the cockles of the Sri Lankan strongman’s heart.

The subject of political strongmen’s inclination to go their own way was re-kindled in our memory last week when we saw on TV President Gotabaya Rajapaksa seated in the front row of the government benches with his younger brother, Basil, on his left reading out the budget speech in measured tones while on his right was his older brother Mahinda, the Prime Minister who had the power to back the budget proposals with a two-thirds majority. The man in the centre of the Rajapaksa trio, GR, it was apparent, called the shots. The proposals being read out by brother BR was his or at least those that he approved — and backed by brother MR. And it was he, GR, who had the executive power to implement them.

GR’s proposals read out in the budget speech and even those not in the budget on that very day were running into heavy fire both inside and outside parliament. On Wednesday thousands had gathered in Colombo for a protest meeting summoned by SJB leader Sajith Premadsa and TV channels showed that they extended down some roads beyond sight as Sajith roared from a roundabout. Buses carrying protestors to this meeting from most parts of the country were being halted and turned back by the police ostensibly to prevent the spread of the Covid 19 virus.

These were vociferous public protests against some of the key decisions of President Rajapaksa.

But the strongman remains cool and unshakeable. He, like most strongmen, wants to ‘Do it my way’.

Whether President Rajapaksa has been influenced by the Frank Sinatra principle, we are unaware. He has been a resident American citizen for many years, mostly at Los Angeles, we are told.

He has also been a military man — a Lt Colonel — and even though he has shed the army uniform for civilian clothes, it appears that his thinking and faith in military virtues such as discipline and efficiency have not diminished. Going back on vital decisions made, in military terms — beating strategic retreats — is done only under extreme compulsion. Going back on his decisions appears to be something not in his book.

However, issues concerning governance of an entire country may transcend areas confined solely to military governance. Agriculture and many of its disciplines demand strict application of scientific principles combined with laws of economics and common sense. The Frank Sinatra application of ‘Doing it my way’ cannot be applied to rice cultivation or tea plantations.

Of course it would be argued that the final decisions made by the president are not solely his. He is abiding by his election manifesto ‘Vistas of Prosperity and Splendour’ drawn up by a team of experts and decisions are made in concurrence with the Cabinet.

But the executive powers vested in President Rajapaksa after the adoption of the 20th Amendment seem without limits. What could parliament or the cabinet of ministers do if he ignores their proposals and goes ahead? Could a politician or legal institution obstruct him? But all this seems to be not enough.  He wants a new constitution and what that ultimately holds for the country only he knows.

We read a curious defence of past dictators worldwide in the state media last week claiming that significant advances made in some Asian countries in contemporary times were by strongmen who broke out of the traditional shackles that held rulers who ploughed the same old beaten track.

Park Chung-hee is considered the best president South Korea has had considering the economic miracle he staged converting a backward under developed country into an industrial state.

But his popularity took a downward slide as opposition grew to his dictatorial rule and was shot dead by his own intelligence chief and friend while at dinner.

There were other dictators such as Ferdinand Marcos whose presidency began with good economic growth fuelled by foreign borrowings but went into an inflationary spiral forcing Marcos to impose Martial Law.  Marcos and his wife Imelda had to flee the country in a helicopter from the presidential palace as the rebels got there.

There was the Shah of Persia who gave himself the title Shahenshah (King of Kings) and ruled Persia from 1941 to 1976. The Shah using his the immense oil reserves of his country and with Western assistance transformed the country into a modern state and built up his forces to be the fifth strongest military in the world.  He was considered the Guardian of the Gulf.  But his strongarm tactics in ruling his kingdom, repressing dissent using SAVAK his intelligence agency which was accused of holding thousands of political prisoners and their torture finally led to the Islamic Revolution led by exiled Ayatollah Ruhollah Khomeini returning home from Paris and the King of Kings going into exile.

Other Asian leaders such as Pol Pot of the Khmer Rouge in Cambodia, Gen Ne Win of Burma who resorted to unorthodox means to seize powers and deployed fascist military came to sorry ends leading their countries in pitiable states even today.

The paradox of strongmen in power is that even at the zenith of their power they pledge to return to democratic rule as soon as possible as witnessed now in Myanmar even though it is highly unlikely as they have to face the wrath of the people when protection by their military thugs would no longer be available.

Nonetheless the Frank Sinatra principle will be sounding as a serenade to most would-be dictators in power. We reproduce the last lines of this celebrated song.

For what is man, what has he got

If not himself when he has naught

Not to say things he truly feels

And not the words of

The record shows I took all the blows

And I did it my way.