While the locals watched the fracas in Parliament in shock, Sri Lankans living in foreign countries were forced to cover their faces in shame when the world watched this melee and laughed their hearts out at the ‘uncivilized barbarians, masquerading as legislators!

Have you watched our Parliamentary proceedings lately?

I feel it must be rated “R” or even “X” like how movies are rated so that our children under 18 should not be allowed to watch the law-making process in that August Assembly, The Parliament of the Democratic Republic of Sri Lanka. 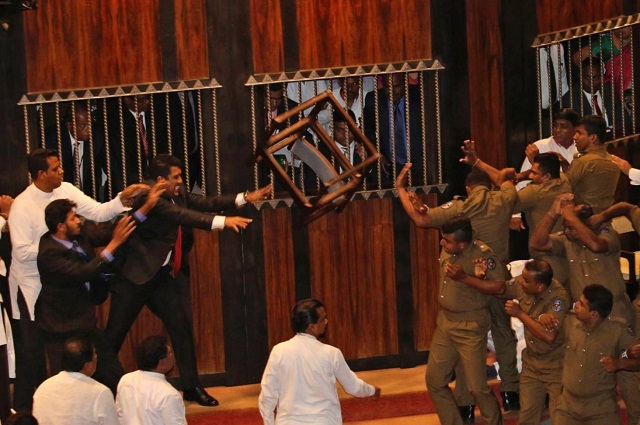 A couple of years ago, we saw our Parliamentarians get into a brawl, hitting, punching, throwing chairs, and even dousing each other with chili powder. However, if you looked at these MMA (Multiple Martial Arts) warriors, they were not dressed in judo, karate, or taekwondo outfits. Instead, they were all clad in a spotlessly clean white national outfit, and each of them carried the Honorable title Member of Parliament!

If you had enough of the visual on TV and listened to the audio, you probably heard words like booruwa, meeharaka, gona, nariya, moosalaya etc. So an innocent, unsuspecting child might get away thinking our Parliament sits in session in a zoo or an animal farm!!

But when a veteran Leftist politician screamed “Pa***ya” at the former Prime Minister, it was a dead giveaway as to what low levels the venerable body of legislators in Sri Lanka has sunk to!

Baboons are the most loudest, most obnoxious, most dangerous, most viciously aggressive and least intelligent of all primates and a collective noun for a group of baboons, believe it or not is called a “Parliament” that pretty much explains!!

While the locals watched the fracas in Parliament in shock, Sri Lankans living in foreign countries were forced to cover their faces in shame when the world watched this melee and laughed their hearts out at the ‘uncivilized barbarians, masquerading as legislators!

Let us look at the snow-white, spotlessly clean collarless shirt and sarong our Parliamentarians wear for a moment. If an average citizen looked like our Parliamentarians, Sri Lanka would quickly join with countries in the west, like the US, where obesity is a problem! These MP’s shirts are bursting at the seams in the abdominal region – thanks to the rice and curry meals lavishly served for them at the heavily subsidized Parliament Cafeteria – funded by taxpayer rupees. These ‘Honorable’ lawmakers are so crass and uncouth; they make it a point to break wind when a critical debate is in progress – such as the budget debate. Or should we compliment them on their impeccable timing and ability to control their gastro-intestinal tract by letting a blast of flatulence go when gas prices are being discussed in the debate?

The subject of gas hit the mainstream news media, and the social media pundits took the ball and ran with it. Some experts in the cooking gas business had recommended that the proportion of gases be mixed in a specific ratio so that the gas mafia can make an additional profit per cylinder of gas sold. But it appears that the step of mixing gases in an unauthorized proportion caused a leak, and an explosion ensued.

The Speaker of the House helped immensely in this front by his insensitive comment “gas explodes” – not realizing the microphone was on when he made his sarcastic comment. As a result, the news media – for a week stopped calling:” Breaking News,” instead called it: “Explosive News”!!

The Speakers Faux pas gave the opposition an opportunity to go to town and started firing in “all cylinders” – holding the government responsible for causing this explosive situation.

Amazingly, the Honorable MPs from both sides of the aisle became instant experts in gases, gaseous expansion, butane, propane, methane etc.! A few students from a Leading College GCE O’ level class who happened to be in the gallery made it a point to meet those “expert” MP’s and posed them the question: “have you heard of Charles Law and Boyle’s Law”. Invariably, the answer was – it is some law that came from Roman-Dutch Law and English law that found its way into our legal system. The students got the responses on their phones!!

Meanwhile, average households who live in one room dwellings where they live, cook and sleep are living in mortal terror! They are caught between a rock and a hard place. They are forced to keep the gas cylinders in the room and if they leave it out, and the gas thieves get wind of it – it’s Gone with the Wind”

The average family these days is faced with scarcity of essential commodities, skyrocketing costs and the circus act of balancing the household budget. In fact, the flickering light you see coming out of these houses at night is – someone burning the midnight oil to face these challenges! Santa may have skipped his annual global visit last year – because of restricted airways (result of Covid -19) but may resume this year in the next couple of weeks.

The hopefuls are wondering if Politicians placed in Ivory Towers would play Santa this time with the issuance of a midnight Gazette Notification!

But the issue is – housewives resorting to wood burning hearth for cooking, and the resulting smoke-filled skies of Sri Lanka would make the reindeer say, O’ Dear and retreat back to the North Pole till next Polls. The folks in North and East are not out of the woods either.  Do they opt for Jungle law – even in these times of Jingle Bells? The diaspora – not at all touched by the miseries of exploding gas cylinders, wood-burning hearths, food insecurities, high cost of living etc. ease their conscience by making calls from around the world to their kith and kin wishing them Jingle Bells – thanks to the invention by that genius, Alexander Graham Bell. The borrowed cradle telephone symbol of the rogue elephants and it’s ringtones from silent mode, signals alert alarms.