It is customary to have jogging tracks or walkways bordering small lakes with hardly any wave actions on the banks while for the larger inland water areas driveways for vehicles are available or constructed.

Sri Lanka, proud of being a country known for its long ancient civilisation, mainly due to hydraulic irrigation systems based on the above,seems to be under threat due to irrational decisions and un-prioritised modern technological applications! 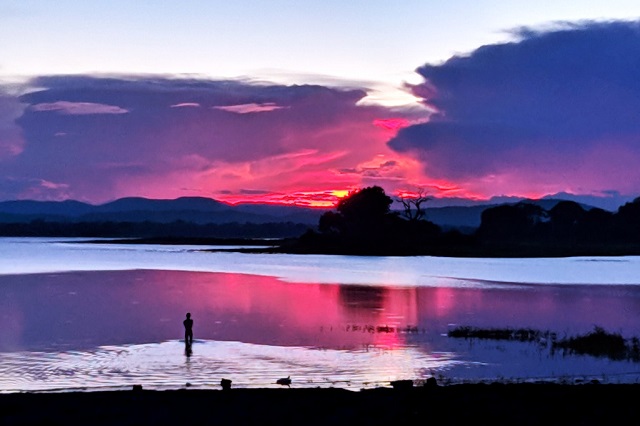 At a critical period of time in the history of Sri Lanka when “health workers” and other devoted rational decision makers are fighting to save human lives despite a prevalent economic crisis, extravagant spending on “not so urgent” major projects could be considered ridiculous.

While recreational facilities for health benefits would undoubtedly be profitable, improvements to longstanding existing facilities rather than spending on alternate projects both on Rural and Urban development would be more beneficial to the greater masses as a matter of priority.

There are many inland water bodies in Sri Lanka, rivers (gangas), and wewas, lakes, lagoons, canals etc., Perhaps the largest, Parakrama Samudraya is known as a Samudra (sea) due to the size and the wind causing waves similar to those seen in the oceans.

The only inland “Samudraya” in Sri Lanka, the largest man-made lake having a large water  surface area  (22.6 km2; 8.7 sq miles) was named after the visionary ancient King of Ceylon, King Parakramabahu who built  it around 386 AD consisting of five separate wewas connected by narrow channels in Polonnaruwa, . The Rest House bordering the Parakrama Samudraya had the honour of hosting the British Queen Elizabeth and the Late Prince Philip at the scenic holiday destination abode during their last joint visit together to Sri Lanka in the 1960s.

It is customary to have jogging tracks or walkways bordering small lakes with hardly any wave actions on the banks while for the larger inland water areas driveways for vehicles are available or constructed.

While it would have been very evident to those traversing the coastal areas of the country, that the commonest form of “cost effective” coast protection from the ocean has been the use of well fitting boulders, while in some affluent advanced countries “sea walls” are constructed to protect the coastline at much cost.  These boulders when settled and consolidated are very effective for the purpose and have stood the test of time for decades.

With such an effective system prevailing and perhaps needing a few more boulders to further strengthen it, it is very irrational to disturb the embankments, leave alone incurring massive  rehabilitation costs which can be well used for other infrastructure development projects.

It is with much grief that I wish to predict that if this embankment is disturbed, it won’t be long before the existing scenic road bordering the Samudra will also need rehabilitation, unless costly concrete protective measures are adopted to protect the roadway!

(The writer is Emeritus Senior Professor of Civil Engineering, University of  Moratuwa.)