Sajith Premadasa who is crying out loud deserves some scrutiny.  He is now promising both sky and earth without revealing, or rather without having a delivery strategy.

“It was only two years ago you threw them out for their incompetence and elected me. They are now asking the governance back, claiming that they can do better as if they were not in that government. Well, if I am not good, sack me, but do not bring the ‘old set’ back, look for a new group” ~ President Gotabhaya Rajapaksa

The most accurate and important political comment of the year has sadly eluded frontliners who are yearning for an overhaul of the system of governance, has escaped the scrutiny of vibrant critics and as usual, blown over the empty heads of the majority.

This is the testimony that Gotabhaya’s conscience is clear. He wanted, planned, and wished for good governance for the country and its people. While indirectly acknowledging that he has not delivered what he wanted to deliver, he is telling the people to get a right group of new people to make the desired change. He warned not to bring back the usual suspects who participated in governing and ruining the country and its people for the past 73 years. 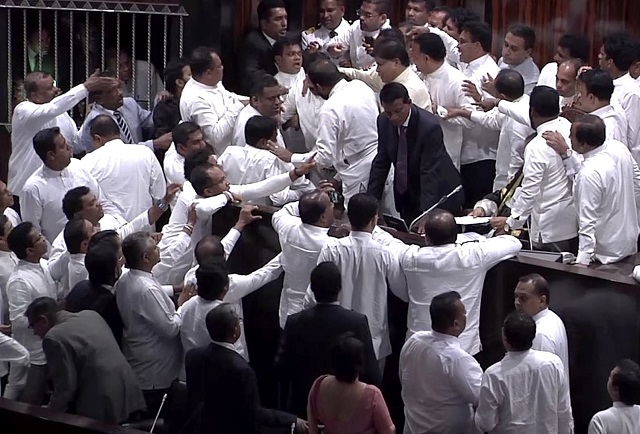 He did not specify who the usual suspects are. While hinting that the prime suspect has been the previous regime, he did not exclude his own party led by his family. Most people who have so far mocked at the president and invited him to find that new group himself, have not been intelligent enough to see the subtlety of the warning. I do not intend to discuss the unsuitability of Ranil Wickremasinghe and Maithripala Sirisena to govern Sri Lanka because I have already done so in an article entitled ‘The Dirty Dozen’ published by Sri Lanka Guardian.

Sajith Premadasa who is crying out loud deserves some scrutiny.  He is now promising both sky and earth without revealing, or rather without having a delivery strategy. Sajith was the deputy leader of the UNP that governed the country from 2015 to 2019.  He has been a politician for over twenty years. Has he ever opposed any of the drastic decisions that their government made during the Yahapalanaya? For instance, the selling of the Hambamthota harbour. Indeed, they say it was not a sale but a 99-year lease.   Compare the 73 years since independence with 99 years. We feel that the 73 years since independence is a long time. A very long time. Many people have died since then. Ninety-nine years is 35% more than 73 years. We can bury at least three generations during a 99-year period. Children born after another 90 years would not even know what the deal had been. The irony is that the UNP/ SJB has been critical and vociferous about any sales proposed by the current regime. This is to highlight the double standard of the UNP/SJB, not to justify any such sales at all.

Has Sajith ever proposed any constructive policies and strategies to alleviate poverty, improve public services, or to establish social reforms and has Ranil rejected any of them? Was he hiding the so-called development plans and benefits that he is promising now, for an opportune moment or did he have no such strategy at all?  Has he ever expressed his opposition to any of the decisions that the public rejected or opposed during their governance?

Simply, if he was not complicit in the governance, has he ever resigned or even threatened to resign? Has he ever shown any guts and taken the lead when the UNP backbenchers started rebelling against Ranil? Can he absolve himself from all ills by just pointing the finger at Ranil?

Is he promising anything different to what the Rajapakshas kept on promising for years on end but never delivered? Has he got any new lies that are different to Rajapaksha lies?  Is his notion different to that of the Rajapakshas when visiting temples with the hope that the monks would enthrone him? Does he propose strategies, systems, or methods to achieve what he is promising.  The simple answer is that he has absolutely nothing to offer other than manufacturing of lies to grab the moment. Sajith is another crooked cog of the political fraternity who governed the country after independence. The crimes committed by his megalomaniac father, who suffered from an inferiority complex, are still fresh in the minds of people.

The Rajapakshas occupy a greater portion of Gotabhaya’s “old set” category. The intrinsic value of his comment is that he let the people know that dogs don’t eat straw but, do not let the bulls eat either. Gotabhaya may have agreed to take over from Mahinda with good intentions but without understanding the vicious system of giving a little and taking a lot. He did not understand that someday he had to return the favours that his family accepted, monetary or otherwise, to ensure his victory. Being politically naïve he was unaware of the unwritten commitments that he had no escape from.  The notions of elimination of corruption, alleviation of poverty, establishment of the rule of law, establishment of an equitable society and one country one law etc. turned out to be mere promises. The imbecilic cronies of the Mahinda/Basil camp who made Gotabhaya’s victory possible would not let him achieve the goals that he aspired to reach. He has run out of options but to ask the public to get a new group of good people to change the system and govern.

There is no sign of light at the end of the tunnel yet. The country has not yet seen a new group that is capable of turning the political wind to blow towards their camp. The country has not yet seen a group that has clever and intelligent members with convincing outlook who can turn the tide. Despite the mushrooming of protest groups, people have not seen a group that is capable of uniting all opposing forces.   The country does not see leaders with leadership quality, political acumen and experience, clear vision and an explicit strategy for a system change. Indeed, the lead partner of this consortium must have the organising capabilities. Thus, the responsibility of this historic change falls on the JVP. People do not vote the JVP unless they see a drastic change in their outlook including the name, and they produce a convincing proposal of how they are going to make the overhaul. Identifying the opponent, his/her strength, his/her tactics and how to counter them must be part of their strategy to win an election. Although the current regime seems weak at present, underestimating their strength is unwise. The new group must fight two equally strong opponents while convincing the gullible electorate to free themselves from political slavery.  In a country full of selfish people, nothing is easy.