If the Minister was serious about the public nature of the challenges, he should not have given purely a family perspective on the subject.

The budget speech that the Minister of Finance, Basil Rajapaksa, delivered to Parliament on 12 November 2021 was fairly structured with following sections. That is a positive.

4. The Challenges Before Us.

6. Development of the National Economy.

But the content was the question with family boasting, half-truths, contradictions, and unachievable pronouncements. If the Opposition was serious in countering the mistaken or wrong policies, weaknesses, errors, or ‘blatant lies’of the budget, they could have possibly used the same format in disputing the Minister. Democratic politics is not about a ‘gang war’ between the government and the opposition as appears to be the case in today’s Parliament. The debates should be more critical on the flawed policies with promoting alternative perspectives before the people. 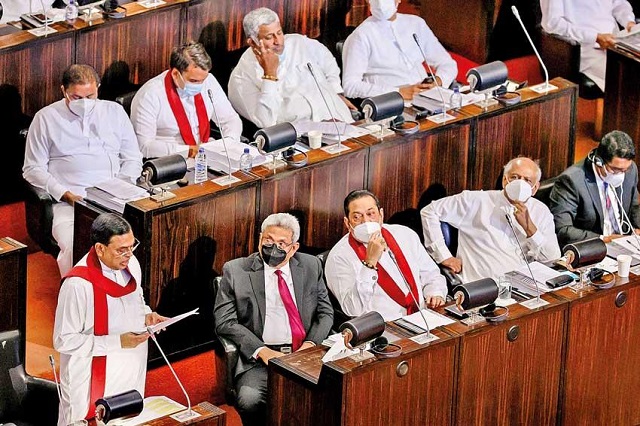 In parliamentary democracies, there are ‘shadow cabinets’ and ‘shadow ministers.’ There should be a ‘Shadow Minister for Finance.’ It is mainly his/her role to present counter arguments, expose false data, and criticize misleading policies. The opposition also should have a ‘official website’ where they could publish counter arguments or counter budgetary policies. Of course, it is also the duty of the media (as it is fairly done), academics and journalists to do the same critically and objectively.

Preface at the beginning correctly says, “We are passing through perhaps the most painful period of human civilization.” This should mean the environmental disasters, covid pandemic and deaths, increasing poverty in poor countries, and evolving economic crises worldwide and others. Of course, these are challenges even in Sri Lanka. As a solution he says,

“I first come to learn the concept of ‘Challenging the Challenges’ for the betterment of the public in my ancestral home in Madamulana. The Rajapakse’s have a history of never being daunted by challenges. Mr. D.M.Rajapakse, who is known as the “the Lion of Ruhuna”, who represented the second State Council in 1936 is known by the entire country. He is my father’s elder brother (lokuthaththa).”

If the Minister was serious about the public nature of the challenges, he should not have given purely a family perspective on the subject. His phrase ‘Challenging the Challenges’ is a common phrase in many languages and in quotationsof many authors. Tracing it to Madamulana may be suitable to a D.M. Rajapaksa oration, but not to a preface of a budget speech.

He does not stop there. He goes on in the remaining eight paragraphs of the Preface (1.4 to 1.11) in boasting about his family, lokuthatha, thatha, aiya,malli,thama, and their achievements. This is undoubtedly a record in budget speeches in the world. He places Mahinda Rajapaksa at the center of this legacy who in fact got disgracefully defeated in 2015 when he tried to contest the presidency for the third time, changing the constitution and breaking the accepted democratic norms of the world. This is what the Minister says: “The Hon. Prime Minister Mahinda Rajapakse who is today in this House, is at the center of the Rajapakse Political Legacy.”

There is no mentioning of other Ministers, the Cabinet, or its collective responsibility. Not a word about other parties or its leaders other than what he has created as Podu Jana Peramuna.

Minister is correct in briefly outlining five global challenges: (1) increasing global social and economic disparities between the rich and the poor, (2) the slow progress in achieving the (UN) sustainable goals, (3) increasing environmental catastrophes, (4) limited assistance from bi-lateral and multi-lateral institutions, and (5) challenges in adopting to the post pandemic ‘new normal.’

The degeneration of moral and ethical standards worldwide particularly among political leaders with corruption, deals, misdeeds, and authoritarianism is not at all mentioned.

However, without much connection, he states “The impact is worse on countries with trade focused economies, such as ours, compared to those economies dominated by the manufacturing sector.”

Even if his ‘vision’ of turning the present economy of Sri Lanka from ‘trade focused’ to ‘manufacture dominated,’ is commendable, the global challenges that he has outlined have nothing much to do with the difference.To my knowledge of economics, trade and manufacture are complimentary. While Sri Lanka undoubtedly should promote more and more manufacture, a balance approach might be the best without countering one against the other as he has done. It is in the same section that he has come to a figure of Rs. 500 billion.

“The opportunity to provide such services both domestically and externally has been curtailed resulting in a loss of income. As a result, the loss of revenue to the country and the Treasury has been unlike any other year before. The loss to the Treasury according to our estimates is over Rs. 500 billion.”

The nature of local productions and nature of exports undoubtedly are reasons for our economic predicaments and underdevelopment. Therefore, it is commendable if the government makes genuine efforts to change the situation. But the claim that this year’s loss to the Treasury of Rs. 500 billion is purely a result of this economic imbalance is unbelievable unless the government supplies concrete evidence for the claim. This loss or a major part of it appears to be a result of mismanagement of imports and exports, and the enormous tax concessions given to the rich by the last budget. Without direct import controls, higher taxes could have been imposed on unnecessary or luxury imports. Dialogues with importers could have been another measure.

It is quite superficial to talk about ‘our strengths’ just after talking about global challenges, as if Sri Lanka is at the forefront of changing the world! At the beginning of this talk is the boast about Rajapaksa family and its leadership again. Both the President and the Prime Minister are praised. If the budget speech was following a kind of SWOT (strengths, weaknesses, opportunities, and threats) analysis, with the strengths, the weaknesses also could have been discussed. That is the way to go about economic change.

Among the strengths, there is only one paragraph with four sentences on Infrastructure. It goes on saying, “Our infrastructure facilities are of high standard. The quality of our ports, airports, telecommunications, highways, roads, and electricity supply are very good.” Of course, there are certain aspects to be ‘proud’ about, but some are still in preparation (ports). What about railways? They are still in the colonial heritage.

Minister suddenly jumps on to something perhaps dear to them saying, “Also, through the 100,000 kilometers road project and the 5,000 bridges program, the by-road network will be strengthened further, and the entire country will become a single network.” This 100,000km roads program was there even in the last budget. Only addition is the 5,000 bridges. Perhaps there is a new determination to go ahead, because, as alleged by many people, these road constructions are beneficial to political supporters.

No mentioning of the IMF under friendly organizations.

It is also surprising and intriguing that China or Chinese organizations are not mentioned as friendly countries or organizations. Mahinda Rajapaksa’s budget speech last year gave much emphasis on China. It might be too early, however, to speculate whether this shows a shift of alliances in the international context and relations.

However, under the next section on ‘the challenges before us,’ the IMF is mentioned with some negativity. Basil Rajapaksa refers to Dr. N. M. Perera’s budge speech of 1970/71 ostensibly to prove his argument.

“In that he [N. M. Perera] states that instead of building foreign exchange reserves, we have used it for the importation of goods creating a foreign reserve crisis and, thereby, seeking the support of the International Monetary Fund (IMF). From the first IMF facility in 1961, successive governments have resorted to short term assistance from the IMF, and our leaders and financial sector experts have failed in introducing a sustainable long-term programto manage our foreign reserves.”

There is no question that a country should try to manage its foreign exchange reserves without going to the IMF, if possible. I believe that is what N. M. Perera said and tried to do. Of course, there were others who went to the IMF as an easy escape.

However, during recent administrations (Rajapaksa and Wickremesinghe) there had been a tendency to go for various dubious sources to seek foreign exchange loans and assistance when facing depleted reserves. Although no direct conditions are attached from these sources, these loans and deals have been a major reason for Sri Lanka’s deteriorating foreign exchange conditions throughout years. There is no proper solution proposed in the Budget 2022 to this paradoxical situation.

Sri Lanka should not hesitate to go before the IMF. That is the most reliable and resourceful multi-lateral organization, almost like a UN agency to deal with foreign exchange crises and reserves of member countries. It is up to the government to deal with the IMF properly, and negotiate any conditions attached when seeking foreign exchange or other assistance.