Sri Venkata Rangammal Devi was one of the many wives of King Sri Wikramarajasinghe. She was known as a Randoli (chief queen) while the king had more concubines known as Rididolis and Yakadadolis.

The throne of our last king sat in the museum gallery as a doorway to a lost past. The throne, although magnificent, is tragic and doomed. It is the throne of a doomed king of a doomed kingdom. Next to the throne lies the crown of the same doomed king whose entire life was a conspiracy. Next to the portrait of King Sri Wickramarajasinghe at the Colombo National Museums, hangs the portrait of his chief queen, the beautiful and charming, Queen Venkata Rangammal. 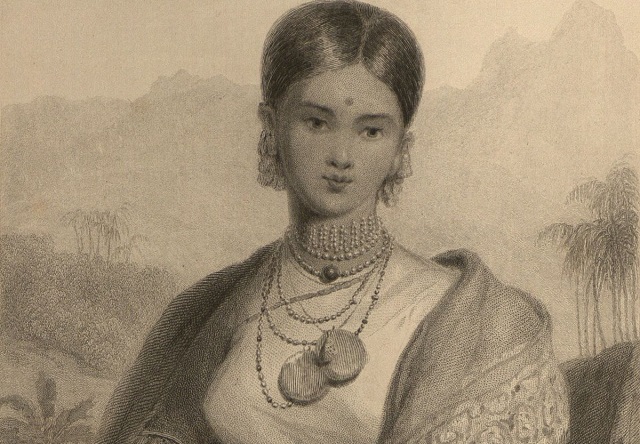 Some of her belongings are exhibited here. Among them, her blood-stained jacket is the most heart-touching. It is said that when the treacherous conspirators caught the king and his queens, some of them pulled the queens’ earrings. While doing so, their ears were wounded as the heavy earrings were mercilessly ripped off. Hence, the frightened queens were all bleeding. The bloodstains in the jacket kept for the exhibition are believed to be due to this incident. The portrait of the young queen touched my heart. Her subtle eyes were filled with unspoken sadness. Her tight lips were not adorned with a smile nor displayed any happiness. I felt that her side tilted head was a gesture of loneliness. Her sadness is so overwhelming that it conquered her charming beauty, and it surely conquered my heart. Her name and tragic end haunted me. Hence, I decided to know more about her. Who was she? Where did she come from? What happened to her? This is a journey we embark on together, to meet our last queen, Venkata Rangammal.

The portrait we see today was originally painted by the English artist William Daniel (1749 – 1840). Old descriptions say that she was very young and extremely pretty and was excited to see herself being transformed into a work of art on paper. It is also said that she was graceful and elegant, perfect as a queen. Studying the portrait, one can see that she is seated on a chair, against a mountainous landscape. She seems to be draped in a saree, and a thick shawl wrapped covering her shoulders. The jacket she is wearing has long sleeves. She is wearing several decorated neckpieces, earrings, and a small tilak on her forehead. Her hair is tied and adorned with flowers.

Sri Venkata Rangammal Devi was one of the many wives of King Sri Wikramarajasinghe. She was known as a Randoli (chief queen) while the king had more concubines known as Rididolis and Yakadadolis. She was not a Sinhalese queen although she is the last queen of ours. She was a Nayak or a Nayakkar who were of Telugu origin and spoke Telugu, Tamil, and Sinhala. It is believed that the Kandy Nayak family is related to the Thanjavur Nayak Kingdom that was in power during the 16th – 17th centuries in Tamil Nadu. Historical data says that the Nayaks were the provincial governors appointed by the Vijayanagar Empire. According to history, the Vijayanagar Empire flourished during the 14th – 15th centuries. After its collapse in the 16th century, the provincial governors, the Nayaks declared an independent kingdom and ruled.

How did Nayak Dynasty land in Sri Lanka?

The last known Sinhalese king Sri Veeraparakrama Narendra Singha’s randoli or chief queen Pramila was a Madurai Nayak princess. The Madurai Nayaks were of Telugu origin, and their origin was known to be in the states of Andra Pradesh and Tamil Nadu. Pramila is the first reported Nayak princess to land in Sri Lanka. Sinhalese kings had married princesses from many south Asian kingdoms; they were political alliances. Sinhalese princesses have also been married to princes or kings of other south Asian kingdoms. It is said that when Narendra Singha sent messengers to Madurai in order to bring a princess, descendants of the glorious Madurai Nayak Dynasty, responded to the offer. It was Narenappa Nayaka’s daughter who was sent to marry the king. Along with the princess, the now fading dynasty’s family, actually whole kith and kin arrived in Kandy and settled there. When Narendra Singha died without children, he appointed his queen’s brother to be the next king. He was a Nayak prince. Accordingly, Sri Vijaya Rajasinghe becomes the first Nayak king of Sri Lanka. That is how the Nayak line rose to power in Sri Lanka. The four Nayak kings were known to be good rulers. They were great patronages of Buddhism. They were able to protect the Kandyan Kingdom from the raging foreign invasions. Unless to the vicious Kandyan chieftains, Sri Wikramarajasingha would have been able to secure the power of the Kandyan Kingdom and defeat the British.

The British Governor Robert Brownridge declared war against the king in January 1815. As the king fled Kandy, he was once again betrayed by the Kandyan Nilames and was trapped by the British in Meda Mahanuwara. Several troops were dispatched to capture the king. The troop where Dies Mudali was in met D’Oyly, Colonel Hardy, Colonel Hook, many senior officers, Mudliars, the British, Ja people, Sepoy soldiers, Ehelepola, Molligoda, Pilimatalawwe, Ekneligoda, Mahavalathanna, and a large number of chieftains (Nilames) on their way to Meda Mahanuwara. While travelling towards Meda Mahanuwara, Ekneligoda and a few more encountered a young village boy. Out of fear the little boy pleaded to spare his life and said that in return he will tell them where the king was hiding. At this point, Ekneligoda tied the little boy with a rope and asked him to take them to the place where the king was. The boy took them towards a house where the main door was guarded by two village women. Ekneligoda knocked on the door and demanded the king to open it. But as the king did not do so, he ordered his people to break open the door. The door broke open. At this moment people who accompanied Ekneligoda rushed inside the house and they tore all the clothes that were worn by the two queens and grabbed their jewellery. They were bleeding as their heavy earrings were brutally removed from their ears. Followed by the two queens the king was brutally forced out of the house. Ekneligoda was verbally abusing the king and had called him a swine. He wanted to tie the king using ropes but Dies Mudali had opposed and then offered his shawl instead. Dies Mudali has reportedly expressed his deep disgust and grief about the manner in which Ekneligoda insulted the king. The two queens shivering out of fear and shame were holding the two arms of Dies Mudali. Upon Dies Mudali’s request, Colonel Hardy and Hook arrived at the place within an hour’s time and treated the royals with due respect and care. They were given clothes and refreshments. Palanquins were brought for them. The king was taken back to Kandy with all honour and respect that a king deserves. It is recorded that not a single Kandyan or Ja people accompanied this parade; only the British and the people of down south were following this parade.

In 1815, the British and the Kandyan Nilames signed an agreement, popularly known as the Udarata Giwisuma (The Kandyan Convention of 1815), where the sovereignty of the Sinhala monarch was surrendered to the British. Meanwhile, the king, his four queens, his mother, and his relatives were held at Teldeniya for some time before they were sent to Colombo.

Dr. Henry Marshall who was in charge of the king’s health while he has held in Colombo says that the king was 5 feet, 10 inches tall, broad, and well-built with a prominent chest. He was handsome and had a very pleasant face with a beard. He describes how charismatic the king was. It is reported that the queens were extremely timid and frightened. They were suffering mentally and physically during these days.

The king and his family were at Colombo for 10 months and on 24 January 1816, he was sent to Vellore, India. They arrived at Vellore fort on 28 February 1816. The fort where they lived till death was later called the Kandy Mahal at the Vellore Fort.

The king and his family were not encouraged to enjoy life as royals as they were living in Kandy. They were deprived of the luxurious and privileged life that they were born into. The king had once asked to sell some of his valuable clothes and give money as he wanted money to make jewellery for his children. Although it is reported that the king had four daughters and one son, we are not quite sure which ones were of Rangammal. Some sources say that the king’s only son was the son of Rangammal. He was born in Vellore Fort and died in 1842, childless. The king died on 30 January 1832, aged 52, and was cremated at the shores of river Palar. It is not accurately reported when Rangammal died or how she spent her last days. A tomb was built for Sri Wikramarajasinha and it was renovated by his great-grandson Vikrama Rajasinga in July 1932. A memorial was built to commemorate the last king and his family and it is called the Muthu Mandapam. The six tombs one can see here belong to the king and his queens. The memorial is looked after by the Vellore District Department of Tourism.

Born into royalty, Queen Rangammal, spent her last days in despair. The beautiful young queen in the portrait still haunts me. Had she ever imagined that her fate will be this tragic and that she will have to leave her beloved royal household in Kandy and live in exile?

Had William Daniel ever wondered the future of this radiant young queen will be so doomed when she was seated in front of him, posing for his portrait?