The Colombo Port City differs from most other special economic zones around the world in that the land on which it stands was reclaimed from the sea, and it is very much part of Sri Lanka’s territory.

The Colombo Port City is a special economic zone and international financial centre and it is an important concept for the country’s economic enhancement. It is considered an extension of the existing Colombo Central Business District. In order to achieve the expected goals, it is necessary to manage the Port City in an efficient manner. The Colombo Port City Commission Bill was passed in Parliament recently and thereafter the commission has been established to manage the Port City. Existing institutions like the Urban Development Authority UDA, Colombo Municipal Council, Board of Investment BOI are not involved in the Port City management. 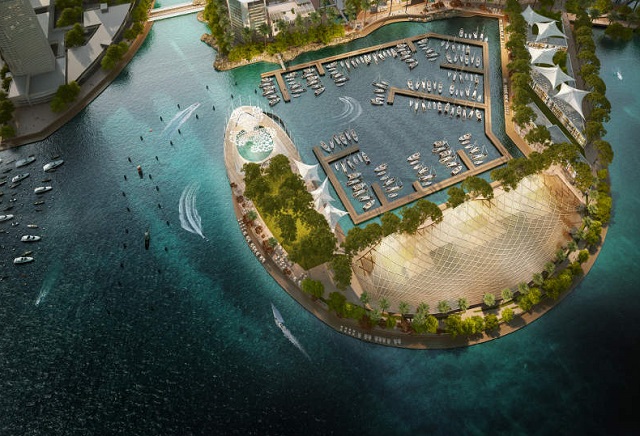 The Colombo Port City differs from most other special economic zones around the world in that the land on which it stands was reclaimed from the sea, and it is very much part of the Sri Lanka’s territory.

Despite its name, the Port City does not include a port; it is only adjacent to Sri Lanka’s main port. There are no factories, production lines, warehouses or any such facilities within the Port City. Instead, as a financial centre, it is said to contain commercial, residential and retail assets, among others.

Land creation: How this new land was created is worth examining. Located south of the Colombo South Harbour, bounded to by the South Harbour breakwater on the North and the Marine Drive on the east, 269 hectares (660 Acres) have been reclaimed. China Harbour Engineering Co. (CHEC) carried out the land reclamation at a own cost of US$ 1.4 billion. In return, the Chinese was given 116 hectares of land on a 99-year lease basis. Another 91 hectares are covered by parks, water bodies, roads, etc., as public spaces, leaving 62 hectares for government ownership as buildable land that can be released to investors. Besides, the developer has enjoyed tax and duty exemptions for the whole project and in addition used the vast quantity of sea sand in land reclamation, free of cost.

The status of the Marina, located in the southern end, whether it falls under public spaces category or buildable areas belonging to the two parties viz. state or the Chinese, is unclear. The capacity of the Marina, its facilities and who manages it are matters of interest to the public.

Project Aim: Foreign direct investment is the primary goal of this iconic development project. Governing politicians have talked about the potential benefits of the project to the country and refer to it as a turning point for the economy. It was announced that the Sri Lankan conglomerate LOLC Holdings PLC emerged as the first major investor with US$ 1 billion investment for a mixed development project in the Chinese held land portion.

All investors will require land to undertake development and such land would be provided on a lease basis. Also investors are expected to enjoy tax and duty exemptions as incentives. Political, economic and social stability of the country at a convincing level is an essential prerequisite to attract investors. Unfortunately, the economic standing of the country is at a poor ebb right now.

Who owns the Port City? On perusal of the website one observes that the Port City owner, or client is CHEC Port City Colombo (Pvt) Limited and it is a 100 percent owned subsidiary of CHEC Limited. This fact leaves a question to be answered. It is true that CHEC manages 116 hectares of land leased to them by the government, having established an organisation within the premises. Who is responsible for attracting investors for the State owned 62 hectares of buildable land. Who manages those 91 hectares of public spaces is also not clear. In fact, the first investment from a Sri Lankan investor went over to the CHEC!

Sources of revenue to the State: Almost every activity in the Port City enjoys tax and duty exemptions. One source of revenue would be from disposal of 62 hectares of land owned by the State when given out to investors. Who handles this transaction is not known. Is there any mechanism to advertise this or are they dependent on publicity by the Chinese? These 62 hectares may bring about US$ 1,800 million, as a crude estimate, from investors if finding investors is successful. There would be revenues coming to the Commission, but as to how they are disposed is unclear.

At the recent Investment Forum there have been statements such as ‘US$ 4.5 billion contribution to support the country’s GDP in the first few years’ and ‘US$ 15 billion growth in GDP after five years’. Potential employment capacity is said to be around 200,000, when fully operational in 20 years. Someone has stated that employed locals could earn US$ 1,000 salary at that stage. How realistic and how they were derived are matters due from the authorities for public knowledge. Such employment opportunities would discourage locals from looking for foreign employment. Direct and indirect revenue sources require assessment.

Is the Port City a mere showpiece created as a tool to enhance the country’s GDP and thereby gain a better image globally, whereas it will not significantly improve State coffers in the short term so as to relieve the country from the huge debt burden?

There are no clear visible sources of revenue to the State coffers other than from sale/lease of state-owned land and employment generation, while city utility services are getting overloaded. It is the duty of the Commission to tell the citizens if there are any others.

Service prerequisites: Electricity, water, garbage disposal and sewerage handling are some major service facilities required for operation and sustenance of the Port City. These create additional service loads on the Colombo city systems. These service systems already seem at full capacity within Colombo city limits. Respective organisations handling each subject will have to augment, operate and maintain these facilities and services in Colombo city at a high cost. Hence the tariff applicable on Port City has to account for such heavy expenses. Furthermore, long term sustenance of these services is a burden on respective institutions. Already the on-going construction of flyovers is at the expense of tax payers.

The Port City occupies newly created land and it is a part of the Sri Lankan territory. Every Sri Lankan must have basic knowledge of what it is; what it does; who manages it; whether Sri Lankans can enter the public areas located within; what benefits the country would enjoy and what revenues accrue to the government to raise the living standards of the countrymen. It is the duty of the Colombo Port City Commission, established as the sole authority to manage and administer the Port City, to divulge information of interest to the public as early as possible on various issues exposed above, especially the revenue to the State coffers in the coming years.