Millions of Hindu are convinced that the DMK government is misusing it’s power and authority to achieve it’s goal of decrying Hindu religion.

In Tamil Nadu state in India, the Dravida Munnetra Kazhagam (DMK) party came to power after the state election in April,2021. 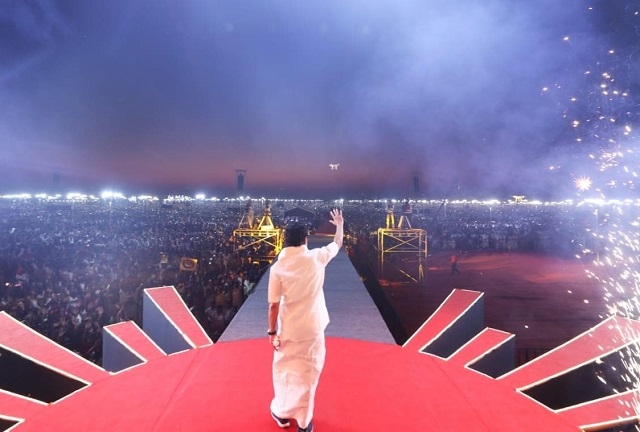 The founders and  the present leaders of DMK party during the last more than six decades of the existence of the party have never concealed their hate feelings for Hindu religion and  have been decrying the Hindu Gods at every opportunity.  Idols of Hindu God were broken, Hindus were described as thieves and Lord Rama, the most revered God of Hindu religion, was  decried , asking “in which  engineering college Rama studied” for constructing a bridge between India and Sri  Lanka when Lord Rama fought against Ravana to liberate Sita from Ravana’s captivity.

For a period of ten years before the present ruling DMK party came to power in Tamil Nadu, the AIADMK party led by M G Ramachandran, Jayalalitha and others respected the sentiment of Hindus and they  showed by their behaviour and talk that they respect Hindu religion and their ethos and traditions.

When the DMK party has come to power in the month of April,2021, the leadership of DMK party has been targeting Hindu religion  with some sort of venom and  targeting to belittle the religion.

In the last five months after coming to power, DMK government has been trying to uproot several traditional practices of Hindu religion  and  even preventing  the temples to function with devotees entering the temple on some days citing Covid issue.   The COVID 19 crisis appears to have been seized as an opportunity by the DMK government in conducting   it’s campaign against Hindu religion.

Now, even though the intensity of COVID spread has  markedly reduced in Tamil Nadu, liquor shops, cinema theatres and educational institutions etc. have been allowed to function, still there is restriction on Hindu temples permitting the devotees on Friday, Saturday and Sunday every week. This step has really  caused distressed feelings amongst millions of Hindus living in Tamil Nadu.

The traditional methods of appointing archakas (priests ) in Hindu temples, have been uprooted by appointing  those who do not belong to Brahmin community and who do not have training strictly under agama sastras

Ever since the DMK came to power, not a day has passed without the government claiming that it has recovered  the land belonging to temples, which  are said to have been  occupied by  encroachers. There is no way to ascertain the veracity of the claim made by the government, since some of the land that the government claims have been recovered could be owned by genuine owners for last several decades , who may not have  proper land records.

Now, what would the government do with  these land ?  It is said that the land would be used to construct schools and colleges . Later on, it may even use the land to construct shopping complexes  or cinema theatres or memorials for politicians and others.

Obviously, lot of corruption will inevitably happen when  the government would use the temple land for non temple purposes with politicians entering the arena and making money.  Politicians who belong to the ruling party will have a  big advantage in making money in unethical ways as contractors or lease holders.

To add insult to  injury, the  DMK government has said that all the gold and  jewels in possession of the temples would be melted and converted into bars and deposited in the banks to get income for the government.

These gold and  jewels  just like the land  have been donated to the temples in the past by several thousands of devotees and the government has absolutely no right to take possession of the land and jewels belonging to temples. The government is not the owner of the temples but only responsible for general administration.

Millions of Hindu are convinced that the DMK government is misusing it’s power and authority to achieve it’s goal of decrying Hindu religion.

It is also noted  by the distressed Hindus that the DMK government  does  not interfere in  the religious affairs of the Christians and Muslims and do not lay it’s hands and the properties and other holdings that are with churches and mosques.

Hindus in Tamil Nadu, most of whom are sincere devotees and want to lead peaceful life, do not know how to react to the present situation when Hindu religion is being targeted by the state government.

As of now, the Hindus living in Tamil Nadu are experiencing very severe mental agony with feelings of distress.