Rise up and salute the sun

Tajuddin Ahmad’s 96th birthday falls on 23rd July 2021, whereas he is one the most far-famed politicians to delimitate our glorious past history. In fact, he was an uppercase statesman of international stature. During our glorious Liberation War with the barbarous Pakistan’s military establishment in 1971 to set up Bangladesh, he was our first Premier. He was born on 23rd July 1925 in a remote hamlet of Bangladesh’s soil. Despite his extraordinary human attributes, he always kept a very low profile in his politics and in life time. He still remains an unsung hero in our history which is very sad for a nation like us. 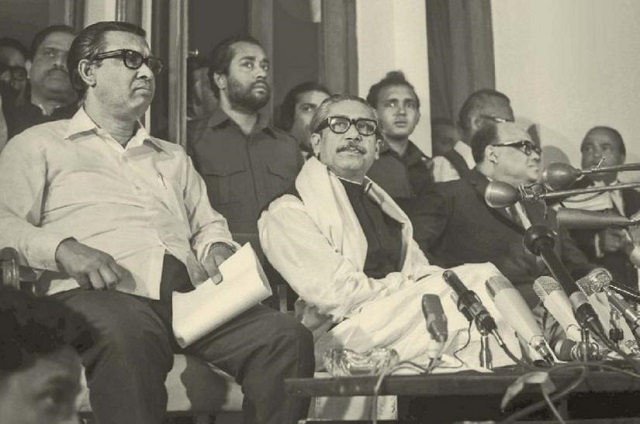 We have forgotten to remember this noble soul with due honour. Noted educationist and diplomat Prof Dr. Khan Sarwar Murshid once said, “Disremembering is equivalent to perfidy.” I was then a college student, but when I still close my eyes, I can clearly remember his handsome and bright face when I took lunch with him sometime towards the end of 1970 just before the national elections of the-then Pakistan at my maternal grandfather’s house at Maison Mia Bari, Kapasia under the Gazipur District, Bangladesh. When I talked to him, I found Tajuddin Ahmad was a man pure in heart and that he owned till his brutal murder in 1975.

Every aspect of his life is a jewel of intellectual prowess, silver-tongued, decent and a politician of perfect refinement with deep patriotism. It is an essential reading on Tajuddin for anyone interested in the struggle for establishing an independent and sovereign state in Bangladesh when Bangabandhu was languishing in Pakistan’s jail. No one will ever know what went through Tajuddind’s mind unless you are familiar with his magnificent character and the very difficult jobs that he did throughout his life, especially during our glorious Liberation War of 1971 to establish Bangladesh, and all the superlatives in the world will never be compensation for his loss in the wee hours of 3rd November 1975.

Occasionally in life there are those moments of unutterable fulfillment which cannot be completely explained by any symbols called words. Their meaning can only be articulated by the inaudible language of the heart. Such is the moment; I am presently experiencing because of absence of Tajuddin Ahmad in the realm of Bangladesh’s politics. I experience this high and saddest moment not for myself alone but for those people who have moved so courageously against the ramparts of injustice and who in the process have acquired a new estimate of their own human worth.

It is because of leadership like Tajuddin, people were all united, in absence of Bangabandhu in the country during our glorious Liberation War in 1971, in the quiet conviction that it was better to suffer in dignity than to accept lives in humiliation. He is the real hero of our freedom struggle; and a noble-spirited politician for whom we can boast of.

We may recall the sorrow that Tajuddin Ahmad and his colleagues endured watching them only died on the gun bullets and bayonet charges in the Dhaka Central Jail by some hooligan junior army officers of Bangladesh Army. We unite all of our sufferings every day to him and his three other brilliant compatriots, asking for the grace and strength to endure them for the sake of Bangladesh. We ask to pray so that we may look forward to the joy that comes from remaining faithful witnesses to Tajuddin like honest and patriotic politicians.

If we are to survive today, our moral and spiritual lag must be eliminated. Enlarged material powers spell enlarged peril if there is not proportionate growth of the soul. When the “without” of man’s nature subjugates the “within”, dark storm clouds begin to form in the world. So, we strongly feel the absence of Tajuddin Ahmad in Bangladesh.

Any student of history should not be surprised. Oppressed people cannot remain oppressed forever. The yearning for freedom eventually manifests itself. The Bible tells the thrilling story of how Moses stood in Pharaoh’s court centuries ago and cried, “Let my people go.” This is a kind of opening chapter in a continuing story.

The present struggle in Bangladesh is a later chapter in the same unfolding story. Something within has reminded the Bengalis of their birthright of freedom, and something without has reminded them that it can be gained. We had been caught up by the Bengali Nationalist Movement, and with our people, we were moving with a sense of great urgency toward the promised land of justice i.e. Bangladesh in 1971. Fortunately, some significant strides have been made in the struggle to end the long night of injustice by the Pakistan’s rulers’ domination on us.

We have seen the magnificent drama of independence unfolded in Bangladesh in 1971 under the able and dynamic leadership of Tajuddin and his pals. It came as a bright interlude in the long and sometimes turbulent struggle for our due rights: and the beginning of an emancipation of proclamation is providing a comprehensive legal basis for equality of opportunity in establishing Bangladesh.

What the main spirits of Bangladesh’s Liberation of 1971 are saying is that the demand for dignity, equality, jobs, and citizenship will not be abandoned or diluted or postponed. If that means resistance and conflict, we shall not flinch. We shall not be cowed. We are no longer afraid. The word that symbolises the spirit and the outward form of our encounter is politics, and it is doubtless that factor which made it seem appropriate to award a peace prize to one identified with struggle.

Broadly speaking, our struggle has meant not only relying on arms and weapons of struggle. It has meant noncooperation with customs and laws which are institutional aspects of a regime of discrimination and enslavement. It has meant direct participation of masses in protest, rather than reliance on indirect methods which frequently do not involve masses in action at all. Tajuddin Ahmad has stood like a solid rock to uphold these principles.

Let us hope that this spirit will become the order of the day. As Arnold Toynbee says, “Love is the ultimate force that makes for the saving choice of life and good against the damning choice of death and evil. Therefore, the first hope in our inventory must be the hope that love is going to have the last word.” The oceans of history are made turbulent by the ever-rising tides of evils perpetrated by the Pakistan’s hellish sawyers on the land of Bangladesh for more than two decades.

The shirtless and barefoot people of the land are developing a new sense of “some-bodiness” and carving a tunnel of hope through the dark hill of despair. “The people who sat in darkness have seen a great light.” Here and there an individual or group dares to love, and rises to the majestic heights of moral maturity. So, in a real sense, this is a great time to be alive.

When we lose someone we love, it seems that time stands stiff. Those we love and lose are together with us in our heart forever in memory. What we shared will never die. It lives in our hearts, bringing strength and comfort while we are apart. With profound grief and sorrow, we regret the sad and brutal murder of our beloved leader, Tajuddin Ahmad. His departure has left a void that can never be filled in Bangladesh. It has been forty-six years, but our tears are seldom gone. Till we meet again…

It is now more than four decades, but his memories of strong leadership and hard work will continue to guide us. “Memory is the scribe of the soul” which was aptly said by Aristotle. Tajuddin’s life was a blessing; his memory was a treasure, and he is loved beyond words. A strong soldier and an exceptionally exemplary human being, adoring politician, devoted leader, our dearest man of history, he lived a glorious life always putting others before himself. Today, we miss his grand presence deeply and sorrowfully. No one can replace his presence and we will live by the memories and the values that he gave us in his life time. Our hearts still ache with sadness and many tears still flow what it meant to lose him, no one will ever know. We miss him immensely.

A great statesman as he was, Tajuddin Ahmad successfully led his nation to its correct destiny in 1971. The state and its government should have a responsibility to officially remember this majuscule politician-statesman. So, please rise up and salute this bright sun on his 96th Birth Day.