As the butterfly emerged, the man was surprised. It had a swollen body and small, shriveled wings. He continued to watch the butterfly expecting that, at any moment, the wings would dry out, enlarge, and expand to support the swollen body…

by Dr. Ruwantissa Abeyratne in  Montreal

No Mommy’s kisses, and no daddy’s smile

The title of this piece is  borrowed from  the title of a book I read in 2013 written by Bruce C. Pascoe about courage in adversity, grief, and change: about mortality and about connecting with those who have left us who, if we let them come to us, will make their presence felt, just to see that we are alright. I have  read elsewhere that angels are all around us, and one manifestation of angels is  a butterfly. Perhaps there is a message in this as Nathaniel Hawthorn said: “Happiness is a butterfly, which when pursued, is always just beyond your grasp, but which, if you will sit down quietly, may alight upon you”.  In other words, happiness is achieved not by impatient pursuit but by the quiet perfection of beauty. I can think of no other person than a mother who could help a child achieve this happiness. 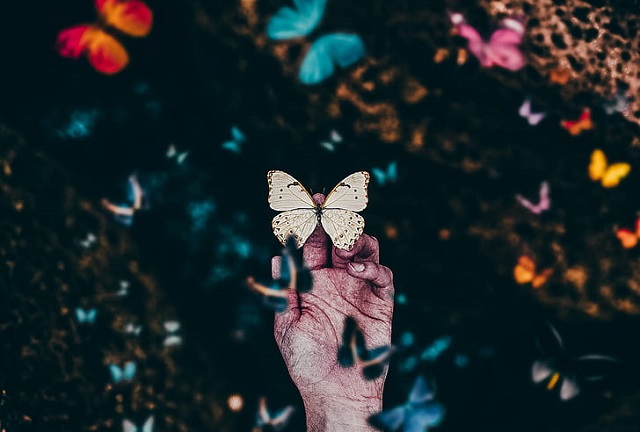 July 16th was my mother’s birth anniversary.  She died 45 years ago – far too young – and has become a hazy shadow in my mind: the voice in my conscience that I recognize as hers.  What I remember of her is that she was soft spoken, and quiet, a loving mother who dedicated her life to bringing up her six children to be virtuous and honorable.  She read to us almost every night and inculcated in us true Christian values. I remember one day, I may have been around five years old, I went into the garden and saw something gold and beautiful glistening in the sun on a shoe flower branch.   I was enthralled.  My mom who came out of the house and saw me in my bemusement  explained to me that there was a caterpillar inside which would later become a beautiful butterfly. She advised me not to pluck the cocoon or harm it as then the caterpillar would not turn into the butterfly.  That was all the wisdom she imparted to my five-year-old brain.

Later, I came across her untold story on the internet: “ A man found a cocoon of a butterfly, that he brought home. One day a small opening appeared in the cocoon. He sat and watched the cocoon for several hours as the butterfly struggled to force its body through that little hole. Then it seemed to stop making  progress. It appeared as if the butterfly had gotten as far as it could, and it could go no further. The man decided to help the butterfly in it’s struggle. He took a pair of scissors and snipped off the remaining bit of the cocoon…and the butterfly emerged easily.

As the butterfly emerged, the man was surprised. It had a swollen body and small, shriveled wings. He continued to watch the butterfly expecting that, at any moment, the wings would dry out, enlarge, and expand to support the swollen body. He knew that in time the body would contract, and the butterfly would be able to fly. But neither happened!

In fact, the butterfly spent the rest of its life crawling around with a swollen body and shriveled wings”.

I was the only sibling who stayed with my mom all the way until she died: not that the others loved her less but they had gone their separate ways and charted their own destiny. My mom introduced me to the piano and the classics and, in consultation with my dad who was always supportive, put me in a good school.  That’s all I needed to grow: to become a butterfly from a caterpillar. Now, in the twilight of my life, I often think of her: that many years ago, in the morning, she may have cuddled me; sung to me in the night when even the stars were asleep promising me of the light to come; stroked my head and lay me to sleep, calling me endearing names. She forgot nothing to keep all of us safe and hopeful. She did everything for me: except maybe take me with her when she went.

A long time ago, or maybe it was not so long ago in terms of what we call “civilization” in a beautiful but unhappy land,  thousands of children were ruthlessly snatched from their mothers’ warmth and placed in what were called “Residential Schools”. These were government-sponsored religious schools that were established, based on pretentious and portentous moralizing,  to assimilate Indigenous children into Euro-Canadian culture. The children not only lost their mothers’ warmth and care, but they were also abused, tortured, starved, and let to die. An estimated 150,000 children were forced into such schools, and it is reported that around 6,000 died, although the number could be higher. The irony is that “Euro Canadian Culture” is said to have  “derived its earliest influences from English, French, Scottish, Welsh, and Irish settlers and is quantitatively the largest proportion of Canadian culture”.  In other words, Euro Canadian Culture was of Christian persuasion which teaches in the Scriptures: “But Jesus called the children to him and said, “Let the little children come to me, and do not hinder them, for the kingdom of God belongs to such as these” (Luke 18:16) and “In the same way your Father in heaven is not willing that any of these little ones should perish” (Mathew 18:14).

National Post records that “one third of children who died at a residential school did not have their names recorded by school administrators. One quarter were marked as deceased without even their gender being noted. Among the 2,800 names on the official memorial register are children known to recorded history only as “Alice,” “McKay” or “Elsie”. In other words, their mothers could not trace them after they were brutally robbed. The mendacity of morass that was woven around this cruel and inhuman activity is yet to be unraveled unequivocally by those responsible.

A mother brings forth her child to love, cherish and watch her grow and finally to seek the shade of the tree of life that she helped grow.  As Robert Burns said eloquently: “ By cruel hands the sapling drops, in dust dishonour’d laid; so fell the pride of all my hopes, my age’s future shade”.  In my quiet solitude I often wonder what my mother would have felt if her children were snatched away from the comfort and safety of her “cocoon”  to suffer and die, and not be seen or heard of thereafter.

We should not be surprised if one day, there are swarms of butterflies over those unmarked graves.