The salary anomalies must be a genuine grievance. But this must be negotiated with the relevant authorities in a constructive manner.

The current ‘crisis’ in Sri Lanka appears to have two salient features. First is the ongoing corona epidemic and the resulting economic consequences. Second is the teacher protests and political mobilizations by the opposition utilizing the economic uncertainties. The two are linked, but the second does not appear to be justified by the first. 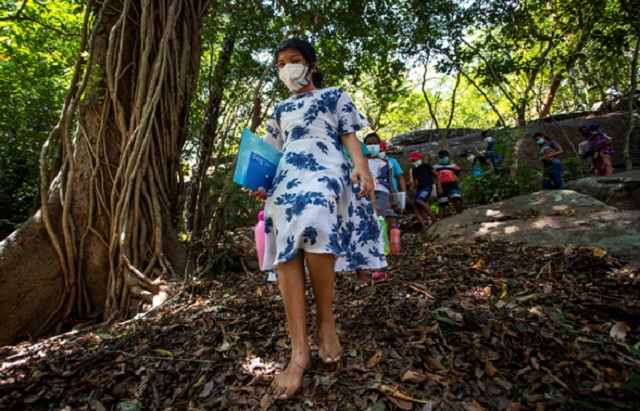 On the contrary, it appears that the street protests, whether peaceful or not, are unethical given the pandemic conditions. The pandemic undoubtedly is the most important ‘single issue’ at present in the country. Citizens and activists have every right to ask for transparency, and criticize whatever weaknesses the government and the health authorities show in implementing preventive and vaccination policies. It is incorrect to say that there are no discussions or criticisms on these matters, but most of the debates have been limited and oblique.

For example, when compulsory and forceful cremations were conducted, the people had every right to protest and campaign. The compulsory cremations were an extreme and unnecessary measure. Religious biases and prejudices were involved  or at least religious sensitivities were neglected. Constructive criticisms and non-street protests are the way forward for the country. In the foreseeable future, it would be difficult to expect spot-on policies or governments in the country from any side of the political divide.

The recent street protests this month are totally different. Pure political motives took the center stage. The main opposition leader, Sajith Premadasa, declared that he would launch ‘street struggles to oust the government.’ Whether he meant a revolution or a coup; no one was very clear. Perhaps an advisor must explain! Elections are far away. The criticisms however are on ‘family rule, cost of living, militarization, and free education.’ The ‘single issue’ this time has become multiple. These are undoubtedly important and debatable issues.

The political opposition mainly started over the Kotalawala National Defense University (KNDU) bill. This should undoubtedly be discussed in the country, even under the pandemic conditions, and the opposition parties have every right and possibility to debate and bring necessary amendments in Parliament. The opposition also have the duty to very clearly explain to the people why they oppose the bill. Has this come forth? I doubt it.

Then came the more militant street protests. Free education was the main slogan. It was completely unnecessary and arbitrary to quarantine Joseph Stalin and other teacher union leaders after their street protests against the proposed bill. The day before, some leaders of the Front Line Socialist Party also were quarantined. Now they are all released, but the government undoubtedly got its image tarnished to an extent because of these actions.

Those who violate health orders could/should be punished (fines or jail), but not necessarily quarantined unless they are contaminated, with necessary evidence. Even in Australia, these rules and punishments are severe. The demonstrations can be stopped and/or dissolved. As I write, the news reports say that over 300 persons have been punished by the police yesterday (19 July) in Sydney for violating health orders. I have seen again and again the police breaking up demonstrations and protests.

After the arbitrary quarantine measures, there were further demonstrations and street protests mainly led by teachers and teacher unions. Notable leftists also were involved. Some were on motor cycles and vehicles. Perhaps they were keeping social distances and wearing masks! They undoubtedly have grievances. In a country like Sri Lanka who does not have grievances? The question is not about expressing dissent, grievances or demanding concessions, but the methods which are being used under the covid and present circumstances.

I have been a supporter and a researcher of trade unions. I have at least addressed one annual conference of the Ceylon Teachers Union in late 1980s. Although I supported the July 1980 strike, I had occasion to warn about its premature and adventurist character. The present government perhaps might not crush the trade unions as the UNP did in 1980. Because some of the leaders appear to believe that the working mass (guru-govi-kamkaru) is one of their support bases. This must have changed today and no one knows for sure.

My concern today however is about the ethical character of the several protest actions conducted by the teacher unions under the covid conditions. Let us just forget or ignore about the motorcycle demonstrations. In addition, the teacher unions had resorted to boycott ‘online teaching’ for students as a protest against the quarantine measures. Even after the release of their leaders, this boycott is still continuing quite harming the student education under the present extremely difficult circumstances. The new claim is that they protest against their salary anomalies!

The salary anomalies must be a genuine grievance. But this must be negotiated with the relevant authorities in a constructive manner. The students should not be prey to teacher grievances. Education also should not be a political game. It appears that the quality of teachers, or perhaps their leaders, have degenerated a lot over the years. Is this not a blow to free education?

There are nearly 250,00 teachers in public schools. Perhaps all teachers are not the culprits. But without the support of each other, the teachers who do not agree with the boycott might not be able to conduct online classes. There are over 4 million students in public schools. Particularly in rural areas these students have to undertake online studies with enormous difficulties. Al Jazeera ran a sensational story on 13 July outlining their difficulties, at the same time explaining their commitment and enthusiasm.

In some remote areas, students in groups have to climb mountains to access online signals. The attached picture is about some students climbing down after such lessons in Bohitiyawa village. But Joseph Stalin however has been cynical about online teaching in that Al Jazeera interview.

“Authorities say they make every effort to provide all children with access to education, but Joseph Stalin, who heads the Ceylon Teachers’ Union, says at most 40 percent of Sri Lanka’s 4.3 million students can participate in online classes. The majority lack access to devices or connectivity.”

Would the students who have difficulties in online access or devices oppose online classes? Their natural inclination would be to ask for proper online accessor devices, but not to support sabotage by their teachers.

Do we have here over 4 million students going against 250,000 teachers? If we count their parents, over or around 8 million, what would be their opinion? I may be exaggerating, because some of the parents also might be teachers of Stalin type.

We talk about free education. Free school education is conducted by over 10,000 public schools. What about the online teaching in private or pay schools? They jolly well conducting their online education. There are over 150,000 private school students in nearly 100 schools taught by around 7,500 teachers.

Of course, the present online education is not a permanent or a long termmeasure. It can be supplementary in the future. Therefore, the opportunity is also to prepare the students for the future. This is what the teachers or the leaders are sabotaging under the influence of some pathetic political advocates. The teachers should be given the jab and brought into the duty of teaching soon.