On October 22, 1947, militants backed by the Pakistan Army invaded Jammu and Kashmir

The people of Jammu and Kashmir, both in Indian Administered Kashmir and Pakistan Occupied Kashmir observe Black Days on different dates. 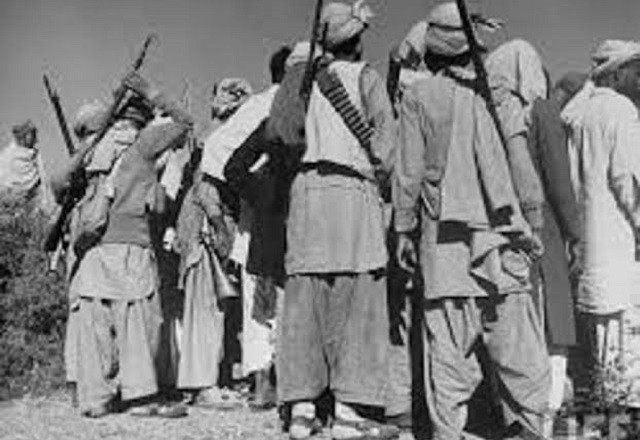 The first Black Day was observed on October 22, 1947, when Brigadier Akbar Khan of Pakistan Army was entrusted in a top-secret invasion of the princely state Kashmir, just two months after independence of the two neighbouring countries.

Akbar Khan, a senior commander with Pakistan Army was the mastermind of the aggression of Kashmir and commanded the first-ever India-Pakistan war over Kashmir. The commander bypassed the Rawalpindi Military General Head Quarters (GHQ) when General Sir Douglas David Gracey was the C-in-C of the Pakistan Army.

The brute commander was a Second World War veteran. A war decorated by the British Army for commanding the ‘Burma Campaign’ against the Japanese invasion of South-East Asia.

Jammu and Kashmir (J&K), a landlocked disputed territory in South Asia was the reason for several wars and border skirmishes between India and Pakistan since the birth of two newly independent nations in 1947.

The war was fought between India and Pakistan over the princely state of Jammu and Kashmir from 1947 to 1948. It was the first of the four Indo-Pakistan wars fought between the two neighbours.

In 1846, after the Sikh defeat in the First Anglo-Sikh War, and upon the purchase of the region from the British under the Treaty of Amritsar, the Raja of Jammu, Gulab Singh, became the new ruler of Kashmir. As the partition unfolded, the Maharaja of Kashmir Hari Singh had signed a ‘Standstill Agreement’ with Mohammad Ali Jinnah, founder of Pakistan on August 12, 1947, two days before the formal independence of State for Muslims in India.

In reality, Jinnah signed the Standstill Agreements with all the princely states in Pakistan territory, including Khanate of Kalat (Balochistan), Jammu and Kashmir, Gilgit-Baltistan, Bahawalpur, Chitral, Swat, Hunza, Las Bela, Kharan, Makran, and others. Unfortunately, all the agreements were deliberately flouted by Jinnah.

According to British Raj’s agreed compliance, the princely state(s) may join any country – India or Pakistan or hold the status quo as an independent nation. The choice to merge was left entirely to the rulers of the princely states.

For most of the princely states signed a Standstill Agreement with Pakistan, the military forcibly occupied the territory and coerced into signing the treaty of accession. Balochistan is one of the many examples in the post-partition history of Pakistan.

Jawaharlal Nehru expressed doubt that the agreements signed by Jinnah would be disobeyed, but for Governor-General of Pakistan [Jinnah] confidently negated his [Nehru] suspicion.

Akbar Khan in his autobiography ‘Raiders in Kashmir’ admits that he designed a strategy under the title of “Armed Revolt inside Kashmir”.

On October 27, 1947, Jinnah ordered General David Gracey to mobilise troops into Kashmir Valley. Gracey declined with a note that all British officers had a ‘stand-down order’ from Supreme Commander Claude Auchinleck of British forces in India and Pakistan in the eventualities of war and conflict between the two countries.

Impatient Prime Minister of Pakistan Liaquat Ali Khan summoned the ambitious Brig Khan at a closed-door conference in Lahore on the tense development in Kashmir, the accession, and possible Indian military intervention. The meeting was attended by Colonel Iskander Mirza (then defence secretary, later became Governor-General) and Chaudhri Mohammad All (then Secretary-General of Muslim League, later became Prime Minister).

With full knowledge of Jinnah, the Pakistan military mobilised thousands of barbarians from the fiercest Pashtun tribes from North-West Frontier Province (now Khyber Pakhtunkhwa) to invade Jammu and Kashmir under the command of Brig Akbar Khan.

An estimated 5,000 savage raiders armed with axes, swords, and modern rifles supplied by the Pakistan army and also military lorries were provided to capture Srinagar, the capital of Kashmir.

The raiders known as “Lashkars” (military or militia) went on a rampage. They plundered, looted, killed, and raped in the brutal invasion, which caused thousands of Kashmiri Pundits to flee the valley.

At midnight on December 30, at the behest of India, a ceasefire came into effect from January 1, 1948. Pakistan accepted the fate of Jammu and Kashmir as the issue was taken over by the United Nations. Thus Pakistan occupied Kashmir is known as “Azad Kashmir”, installing a subservient government to rule the valley. The Azad Kashmir’s puppet government has always been loyal to Rawalpindi GHQ because the powerhouse lies there, not in Islamabad.

Since the stalemate in 1948, Pakistan systematically distorted the history of Jammu and Kashmir. The false narratives are injected in school textbooks, also found documented in national museums and archives. Pakistan got away with it.

After the war, Akbar Khan fell from the grace of the Muslim League government. Liaquat Ali Khan appointed General Ayub Khan as Chief of Army Staff after General Gracey retired on January 16, 1951. Rest is history!

Saleem Samad is an independent journalist based in Bangladesh. He is a media rights defender, recipient of Ashoka Fellowship and Hellman-Hammett Award. He could be reached at [email protected]; Twitter @saleemsamad