Sri Lanka has seen its own exodus of economic refugees, especially after the ethnic conflict in the north. This, coupled with the demographic transitioning of the country to an aging population again spells trouble for Sri Lanka.

The crisis in Lebanon is so grave the World Bank believes it may rank as one of the top three economic calamities to strike any nation for the past 170 years, beaten only by Chile’s Great Depression in the 1920s and the onset of civil war in Spain in the 1930s. 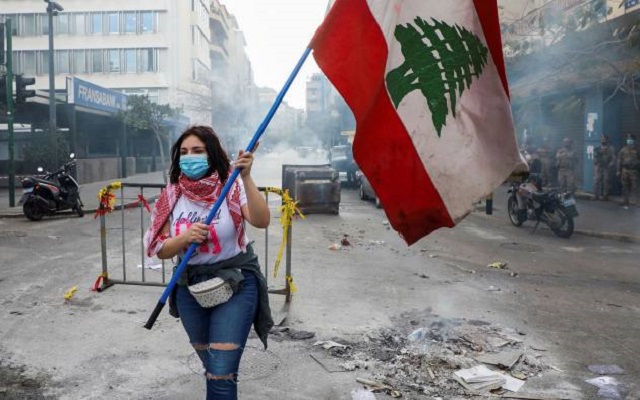 Can it happen in Sri Lanka? Yes, and it can happen very quickly.

A perfect storm is brewing.

It has been a long-time coming, and no one government can be blamed. But it’s 1- minute to midnight today for Sri Lanka, and it is time for all to pull together or we will end up another Lebanon.

My brothers and I knew a different Lebanon in the 1960s. My father was posted as an FAO expert in Syria, and we often went to Beirut to indulge in its affluent lifestyle. Beirut was known as the Paris of the Middle East; with the women in Dior dresses and the teenagers sporting the swinging-sixties fashions.

Today, Lebanese drivers sit in baking summer heat for hours in the hope of finding scarce fuel. Citizens are banned from withdrawing their savings from the banks, the electricity system has stopped working, and a crippling medicine shortage is the latest symptom of a complex illness killing this once-great country.

The currency has lost almost all its value and hyperinflation has sent the price of some foods soaring by 1000 per cent. If the price rises in Lebanon were replicated in Sri Lanka, a one-kilogram packet of sugar would cost about Rs.2,250.

While anger at Lebanon’s leaders is palpable, one man, Mr. Riad Salameh, bears a heavy responsibility for the meltdown. He has been governor of Lebanon’s central bank for an extraordinary 28 years and is the architect of the country’s financial mess.

His most disastrous policy was to encourage more US dollars into the country by urging Lebanese citizens to deposit cash in banks on the promise of unrealistic double-digit interest rates. The Ponzi scheme collapsed in 2019 and the Lebanese are now banned from accessing their lifesavings.

Sounds familiar? Last year, our Central Bank encouraged via its private banks for Sri Lankans overseas and overseas companies to invest in Inward Investment Accounts (IIAs) offering 5-6% interest for one-year. No questions were asked as to how the money was sourced. Apparently, the take-up was limited as many were worried that once the money was in the country it would get stuck there. Now the government has introduced yet another tax-amnesty for people who have not paid taxes but will declare such assets with a 1 per cent fee.

It is unlikely that this will work as this is, I believe, the 14th such amnesty since the 1960s. With the country’s finances in such a parlous state, why not wait for the 15th? In fact, sitting here in Australia, I have been told by very reliable sources that there verse is happening. The black-market is being used by politicians, businessmen and even our cricketers to siphon foreign exchange to buy real estate in Australia. This is helped by Australia’s lax anti-money laundering (AML) legislation that does not require lawyers to report suspicious foreign transactions.

Going back to the Lebanese crisis, its high-flyer governor Mr. Riad Salameh is now being investigated by authorities in France and Switzerland. The latter is probing the alleged transfer of more than $US300 million ($408 million) in funds between the central bank and an offshore company with potential links to his brother, Raja. Mr. Salameh, a former Merrill Lynch banker, has denied any wrong doing.

However, on Salameh’s watch, the value of the Lebanese pound (£LB) plummeted. When I was in Lebanon in the 1960s and the Lebanese pound was on par with the US dollar. However, the continuing civil and ethnic unrest in the country had eroded it such that a few years ago, £LB1500 could be exchanged for $US1. Today, the rate is a whopping £LB20,000 to the dollar. Lebanon’s GDP has plunged from $US55 billion in 2018 to $US33 billion in 2020—a contraction the World Bank describes as “brutal” and of a kind usually associated with wars.

Sri Lanka is no stranger to civil unrest and war, which really came to a-head 50-years ago with the JVP uprising in 1971, followed by the LTTE ethnic conflict in 1983 and then another JVP armed uprising in1987.

But the seeds to all this unrests were planted well before, in the 1960s. After the second-world war, Sri Lanka was second only to Japan on most socio-economic indicators. However, whilst it continued with significant social development in terms of universal health, free education, and literacy, its performance in terms of growth and wealth creation lagged. This caused a mismatch between aspirations and expectations. Simply put, those who aspired to a higher education expected to get jobs. When this did not eventuate, the frustrations boiled over as armed insurrections.

Another time-bomb for Sri Lanka was that, after liberalisation, there was a lot Overseas Direct Investments or ODIs that flowed to the country. These were concessional ODIs with a cost less than 1% and 5% of GDP. Then in 2007, after the Global Financial Crisis (GFC) more money was available via quantitative easing, and Sri Lanka borrowed heavily. But there was no discipline in how these borrowings were utilised. The money was invested in producing on-tradable goods, i.e., those can only be consumed in the economy in which they are produced and cannot be exported.

Today,Sri Lanka no-longer enjoys ‘concessional rates’; and this should, in theory,result in more fiscal prudency in the government, in order to promote both strong and sustainable growth and also social development including reducing poverty.

But economic theory is often overwhelmed by populous politics and rampant corruption.

Sri Lanka is perfectly situated to get help from all the key global players in the area, India, China, USA and Japan, especially to obtain some bridging loans at concessional rates. However, some question whether more money is the answer. Researchers from the London School of Economics have estimated that $US170 billion in capital was poured into Lebanon in the post-war period between 1993 and 2012, but that much of the investment was leached away by corruption and mismanagement. Adjusted for inflation, that sum is greater than what was delivered through the Marshall Plan’s post-World War II reconstruction of Europe.

Another tragedy for Lebanon is that, triggered by hoarding, smuggling, the sudden withdrawal of government subsidies and the inability of the cash-strapped state to import supplies, there has been an exodus of people from Lebanon, trying to getaway to foreign land like Australia and Canada where they have many relatives. Unfortunately, this exodus is being led by the bright youth who stand the best chance of overturning the corruption responsible for bringing the country to its knees.

Sri Lanka has seen its own exodus of economic refugees, especially after the ethnic conflict in the north. This, coupled with the demographic transitioning of the country to an aging population again spells trouble for Sri Lanka. An unintended consequence of Sri Lanka’s social development policies of educating girls is that they have taken an active role in voluntary family planning. Unfortunately, there is a perception in the country that some religious communities are actively pursuing policies that will increase their populations. If true, this will result in further social unrest in the future for Sri Lanka.

The United Nations recently allocated $US10 million ($13.5 million) to buy fuel for Lebanon’s hospitals and medical cold-storage facilities. Let us hope that saner minds will prevail, and Sri Lanka is not reduced to this.

We are all in this together.