The never-ending series of fake-encounters is no doubt the worst violation of human rights in the Indian Occupied Valley of Jammu & Kashmir and it never reaches any end.

The Human Rights Watch Report published somewhere in 2006 said commenting upon the pathetic law and order situation in the Indian Occupied Kashmir, “Fake encounters enunciate that acts of suppression and violence have been deemed as “acts of service,” and compensations and promotions awarded to security forces personnel for killing presumed insurgents.” Now in 2021 Pakistan’s Ministry of Foreign Affairs summoned the Indian Charge d’Affaires in Pakistan to the Foreign Office and handed over a dossier which also expressed the same fears regarding pathetic law and order situation in the Indian Occupied Kashmir. The dossier was titled ‘Indian Human Rights Violation in IIOJK 2021’. The dossier said that the Indian Army is committing war crimes against humanity in the disputed region. The said dossier pointed out that since 2000 over 80 major fake encounters have been reported in the IOK in with murder of more than 160 innocent Kashmiris. It is just a routine matter that the Indian Occupational Forces arrest innocent civilians and then shoot them after keeping them in illegal custody. By end of the day all such murder ones are declared the ‘terrorist’. It has also been reported so many times that different gangs of the Security Forces first manage to get announced head-money on innocent citizens behind the bars and later kill them in fake encounters. 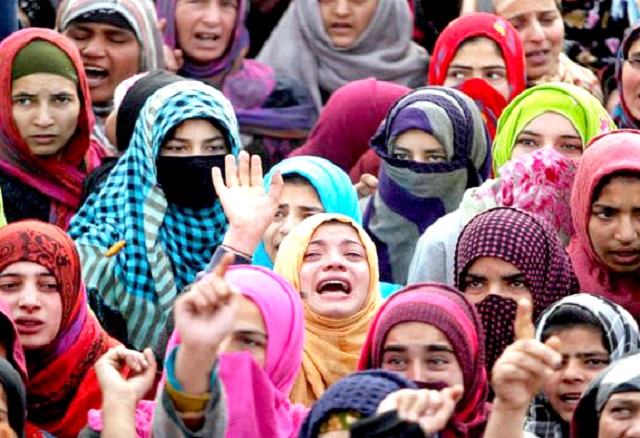 The never-ending series of fake-encounters is no doubt the worst violation of human rights in the Indian Occupied Valley of Jammu & Kashmir and it never reaches any end. On 30th Dec 2020, in an incident of the same type, the Indian Occupational Forces (IOF) and the Police killed 3 innocent civilians in the Lawaypora area of Srinagar but later on the Sector Commander General H. Sahi and Inspector General Police Vijay Kumar in their false statement claimed and declared them terrorists. Similarly, on July 18 2020, three young men were killed in Shopian District in a fake encounter and declared foreigners.  Later some officers of the Indian Occupational Forces admitted in an unofficial and informal statement that Captain Bhoopendra of 62 RR with the help of two civilians deliberately killed 3 innocent Kashmiris and planted weapons on them to secure the bounty worth 2 million Indian rupees.

Summoning of the Indian Charge d’Affaires in Pakistan to Pakistan’s Foreign Office was in particular reference to the reported killing of a Pakistani prisoner in an incident in IIOJK under Indian custody. According to the details a Pakistani civilian prisoner Mr. Zia Mustafa was in Indian custody since 2003. The Indian Express said in a recent report, “Mustafa’s arrest was announced on April 10, 2003 at a press conference by J&K DGP A K Suri in Srinagar. Mustafa was paraded at the press conference as a big catch. Suri said he was a district commander of the LeT and had been involved in the killing of 24 Kashmiri Pandits, who had stayed on in their homes in village Nadimarg in Pulwama district. The police chief said an AK rifle, ammunition, a wireless set, and “documents had also been found on Mustafa, who went by several aliases including Victor.” A few weeks before his brutal murder at the hands of the Indian Forces, Zia Mustafa had mentioned to his family members that the court had almost found him innocent and the court could find no evidence against him. “I will be back with you soon” said Mustafa in that letter.  Reports say that Zia was facing trial before district court Shopian where the state failed to produce even single evidence against him. Resultantly the trial court had to close the prosecution. After that closure the State of Jammu Kashmir filed the criminal appeal before Jammu Kashmir High court Srinagar Wing. That appeal was also dismissed. The Government of Pakistan also admitted Zia as the state subject of Azad Jammu Kashmir in the prisoners’ list on January 23, 2006 and registered him under number SS382577. All these facts and figures prove that Mustafa had been in Indian prison for the last Seventeen years; unbelievably Zia Mustafa was shot dead by the Indian security forces in an alleged encounter on 17th October 2021. The perpetrators of this encounter concocted a story to satisfy the readers but believing such a cock and bull story is not possible for anyone sensible. The story published in almost all Indian newspapers says, “On 17th October, two policemen and an Army soldier were injured in a gun battle between security forces and militants in Poonch, in an ongoing operation to hunt down militants who killed nine Army personnel between October 11 and 14 in a thickly forested area in the hilly terrain of the district.

Zia Mustafa, a Pakistani terrorist, was taken to Bhata Durian for identification of terrorist hideout during the ongoing operation. During the search terrorists again opened fire on the joint team of police and army personnel in which two policemen and an army jawan sustained injuries. Mustafa also sustained injuries and could not be extracted from the site due to heavy fire. Later, the police confirmed Mustafa’s body had been retrieved from the encounter site.” killing of the Pakistani prisoner under mysterious circumstances at a location away from the prison where he was interned, is not only intriguing but also raises serious questions about the well-being, safety and security of Pakistani prisoners in India. Moreover, there is another question too; how is it possible for a prisoner, who had been in Jail for the last seventeen years, to identify terrorist hideouts particularly in a country he doesn’t belong to. The security and the intelligence organizations of that country must have more knowledge of the terrorist’s hideouts than a helpless foreigner behind the bars in a foreign land.