“Intelligent individuals learn from everything and everyone; average people, from their experiences. The stupid already have all the answers.” ― Socrates

30 December 2021 would be etched in the annals of international civil aviation as an exercise in human stupidity.

Christopher Reynolds of The Canadian Press writing on January 5th, 2022, in The Chronical Journal reported on the misconduct of passengers on a Sunwing flight from Montreal to Mexico (Cancun) operated on 30 December 2021 which could have posed a serious pandemical health hazard: “[V]ideos of the Dec. 30 charter flight shared on social media show unmasked passengers in close proximity, singing and dancing in the aisle and on seats. Some clutched bottles of vodka and rum while others vaped and snapped selfies”. CBC News reported that images from the flight showed “passengers ignoring public health measures, jumping, and dancing in the aisle, vaping, and openly passing around a bottle of hard liquor on the plane. In one video, a person could be seen crowd-surfing while the plane was in the air”. 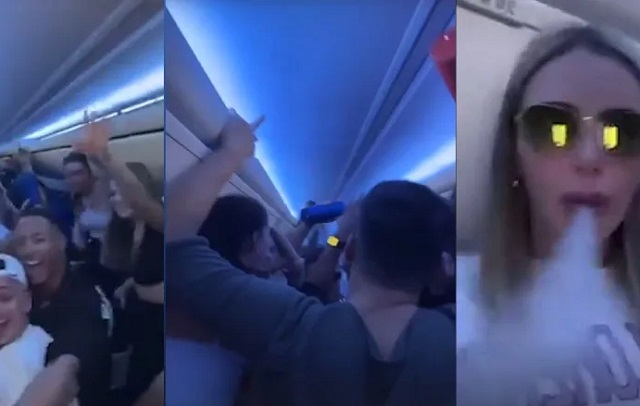 Needless to say, this caused a strong outcry that resonated the sensibilities of a trepidatious society reeling from the horrors of the insidious and highly contagious Omicron variant of the COVID-19 virus.  The outcry reached the highest level, where Prime Minister Justin Trudeau expressed his extreme frustration at the conduct of the passengers, articulating at a press conference in Ottawa: “It’s a slap in the face to see people putting themselves, putting their fellow citizens, putting airline workers at risk by being completely irresponsible.”

Leaving aside the grave danger to society at large this vapid and frivolous behavior posed, the directly affected were the passengers who may not have participated in the misguided festivities and the cabin crew members who were doing their job.  Reynolds quotes Wesley Lesosky, President of the Canadian Union of Public Employees (CUPE) Airline Division, which represents some 15,000 Employees at 10 carriers, who pointed out that the incident underscores the need for greater protections for flight attendants.

it is understandable that air carriers operate a business for profit like any other enterprise and would incur severe economic loss if a flight were to be aborted, landed in a place other than its destination or returned to the point of departure.  However, this has been done throughout the history of commercial aviation if only for the safety of those on board.  Whether this was such an event that called for extreme measures by the airline and the pilot in command is not for discussion in this article.  What is discussed below are facts which are extrapolated against the backdrop of the foundation of moral public discourse which in turn guarantee the sustenance of a civilized society.

Law school 101 is based on the initial premise that justice is administered by the application of the law.

On that basis, we could start with the fact that this was an international flight between Canada and Mexico. Canada ratified The Tokyo Convention Of 1963 (Convention on Offences and Certain Other Acts Committed on Board Aircraft, signed at Tokyo on 14 September 1963) in November 1969; Mexico ratified the treaty in March 1969 and the treaty entered into force for both countries in December of that year. Article 1 of the treaty says that it will apply to (a) offences against penal law; (b) acts which, whether or not they are offences, may or do jeopardize the safety of the aircraft or of persons or property therein or which jeopardize good order and discipline on board.  Here the descriptive text of the types of offences comports with the feckless conduct of the passengers on board the Sunwing aircraft.

Standard 4.5.1 of Annex 6 (Operation of Aircraft) to the Chicago Convention of 1944 – the constitutional treaty of international civil aviation – says that the pilot-in-command is responsible for the safety of all crew members, passengers and cargo on board when the doors are closed. The pilot-in-command must also be responsible for the operation and safety of the aircraft  from the moment it  is ready to move for the purpose of taking off until the moment it finally comes to rest at the end of the flight and the engine(s) used as primary propulsion units are shut down.

That having been said, the next question is, and from a strictly legal standpoint (without the benefit of all the circumstances that prevailed) what could the pilot in command have done?  Initially of course, it would have been prudent for the airline to lay down the ground rules of conduct for the passengers, particularly under the circumstances of a virulently contagious pandemic.  Whether this was done is not clear and the benefit of the doubt for purposes of this article would go with the airline.  Assuming this was done, Article 6 of the Tokyo Convention bestows certain powers on the pilot in command: “The aircraft commander may, when he has reasonable grounds to believe that a person has committed, or is about to commit, on board the aircraft, an offence or act contemplated in Article 1, paragraph 1, impose upon such person reasonable measures including restraint which are necessary: (a) to protect the safety of the aircraft, or of persons or property therein; or (b) to maintain good order and discipline on board; or (c) to enable him to deliver such person to competent authorities or to disembark him in accordance with the provisions of this Chapter. .

The aircraft commander may require or authorize the assistance of other crew members and may request or authorize, but not require, the assistance of passengers to restrain any person whom he is entitled to restrain. Any crew member or passenger may also take reasonable preventive measures without such authorization when he has reasonable grounds to believe that such action is immediately necessary to protect the safety of the aircraft, or of persons or property therein”.

The operative criteria of this provision are the aircraft commander must have reasonable grounds to believe that the safety of the aircraft and its passengers are jeopardized; and he can take reasonable measures of restraint.  Whether he did this is a matter to be determined.

It must also be noted that the word “may” is used in this provision and not “shall” giving the aircraft commander some flexibility of discretion and judgment.

Furthermore, in this context Article 9 of the Tokyo Convention might be relevant which provides that the aircraft commander may deliver to the competent authorities of any Contracting State in the territory of which the aircraft lands any person who he has reasonable grounds to believe has committed on board the aircraft an act which, in his opinion, is a serious offence according to the penal law of the State of registration of the aircraft.

Sunwing is a Canadian airline headquartered in Toronto.  Did the passengers involved commit an offence under Canadian law? The Department of Justice of Canada has released a statement (according to Global News) that it would amount to criminal negligence if an act  includes doing anything that shows a wanton or reckless disregard for the lives or safety of other persons. However, a caveat exists in this particular case that a person found guilty has to know that he is spreading the virus.  In the context of the insouciant and unruly passengers on board the flight it is not clear  whether some of them knew they had the virus.  That they ought to have known that they may be spreading the virus on board may be a matter for debate on adjudication.

Whether the pilot should have invoked Article 9 of the Tokyo Convention therefore remains ambivalent from an objective point of view.

It is arguable that the errant passengers can be held guilty of jeopardizing the safety of the flight (it must be noted that there were passengers on board who did not take part in the fray who were unduly exposed to the risk of contagion). Acting negligently is to depart from prudent conduct that falls below the standards of behavior established by law for the protection of others against unreasonable risk of harm. A person is negligent if he or she has departed from the conduct expected of a reasonably prudent person. Negligence grounds an action in tort at common law.  For this, the plaintiff must prove that the defendant had a duty to the plaintiff, the defendant breached that duty by failing to conform to the required standard of conduct, the defendant’s negligent conduct was the cause of the harm to the plaintiff, and the plaintiff was, in fact, harmed or damaged.  The burden of proof need not be beyond reasonable doubt (unless in criminal negligence) but has to be established on a preponderance of probability.

Recently members of the Russian World Juniors team were removed from a flight that was to depart Calgary on an Air Canada Flight.  A university professor who was on the flight later told the media “Two Russian coaches were in business class across from me. I noticed right away it was tough for the flight attendants because they (the hooligans) had to be told to sit down, not to vape, to stop playing their really loud, hard rock music on iPhones, like out loud, not with any earplugs.”  She further said “[T]here was open booze on the plane, so I guess they’d gone through duty free and weren’t waiting, …in order for the cops to get everyone to safely deplane, these hooligan passengers, we all had to get off.” Once in the terminal “they were still wearing their masks underneath (their chin). They were belligerent. I was staring daggers that usually works with my sons, not so much with the Russian junior hockey team”.

At the time of writing the latest news from CBC News was that the federal government had released a statement advising that the departments of Transport, Public Safety and Health have all launched investigations into the incident and that there could be fines of up to $5,000 from Transport Canada for each offence on board.

Legal action would also take into account the fact that at least one passenger on board had treated positive for COVID-19.

Quite apart from the applicable law, which is the primary issue, there is also the moral issue of social commitment, which in the most fundamental sense calls for all of humanity to treat one another as an end and not as a means. This does not always happen, as Max Cannon once said: “People are going to behave however the social norms permit, and beyond that”.

Dr. Abeyratne is former Senior Legal Officer of The International Civil Aviation Organization.  He currently teaches aviation law and policy at McGill University and consults for Aviation Strategies International as a Senior Associate.  He is the author of Air Transport and Pandemic Law (2021) and Post Pandemic Facilitation of Air Transport (to be released in 2022).