From all over the world the evidence is conclusive that the countries with the largest percentage of the population vaccinated are experiencing the largest number of new Covid cases called “breakthroughs,” a deceptive term to keep focus off the fact that it is the vaccines  that are likely causing the new illnesses, not a “delta variant.”

Recently I pointed out that Big Pharma runs an Internet operation to muster Democrats to the defense of Tony Fauci, who has been caught in a number of lies and would face indictment if the US had a rule of law.  Big Pharma apparently  also funds Coronavirus World Updates which pours out lies to counter the overwhelming evidence that can no longer be suppressed about Covid and the ineffectiveness and danger of the vaccines. 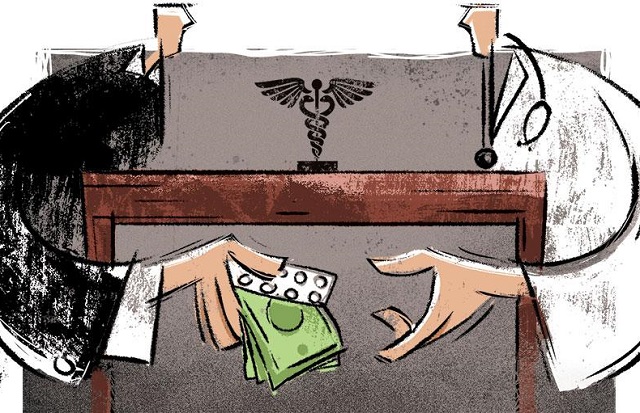 From all over the world the evidence is conclusive that the countries with the largest percentage of the population vaccinated are experiencing the largest number of new Covid cases called “breakthroughs,” a deceptive term to keep focus off the fact that it is the vaccines  that are likely causing the new illnesses, not a “delta variant.”

Some parts of the world such as Iceland and Gibraltar have between 90% and 100% of their populations vaccinated, yet they are experiencing high numbers of  new illnesses.  In other parts of the world reports are coming in that 75% of new infections are among the fully vaccinated. US public health officials are saying the fully vaccinated need to wear masks, an admission that the vaccines provide no protection (neither do the masks). Others health officials report that the vaccines are only good for 6 months and boosters are necessary.  But if it is the vaccines that are causing the “breakthroughs,” the booster jabs will just cause more illnesses.

It is inexplicable that health officials cannot get the narrative in line with the facts.

The latest lie from Coronavirus World Updates is that “those who are not vaccinated are more than twice as likely to be reinfected.”  There is no evidence whatsoever for this statement.  Indeed, the evidence completely contradicts the statement.  Country after country report that the “breakthroughs” are concentrated in the vaccinated.  People who had Covid and recovered have natural immunity which holds up far better than the six months being ascribed to the vaccines.

The number of official Covid cases is the product of a defective Covid test, now being abandoned by the CDC and WHO. The test was run at such high cycles that it produced false positives that were used to exaggerate the threat and induce fear to prepare acceptance of inoculation. The actual Covid cases are a small percentage of the official number. Remember also that last flu season there were no flu cases reported.  The flu cases were counted as Covid cases.

The Covid deaths were also greatly exaggerated.  Hospitals had financial incentives to report all deaths as Covid deaths.  Most “Covid deaths” were due to co-morbidities, lack of treatment, and even to a motorcycle accident.

Here is how to understand that Covid is being used to make vaccine makers and their investors very rich. Covid is amongst us. It has now allegedly produced the “delta variant” and many more variants are to come. The vaccine only works for a limited time.  To be safe we will need booster shots.  As the “variants” will continue forever, so will the booster shots.

There might be darker agendas afoot. There is evidence that the toxic spike protein in the vaccine accumulates in the ovaries and testicles, thus impairing human fertility. We have reached the point in our collapse that evidence itself is now regarded as “conspiracy theory” and is “fact-checked” away by the hired guns of the corrupt American establishment.

According to the corrupt American medical establishment which values money over life, doctors who tell the truth and cure you of Covid are “spreading misinformation”

Here is Dr. Tess Lawrie of the Evidence-Based Medicine Consultancy:

WHILE some well-intentioned (but ill-informed) MPs are doing their utmost to counter Covid ‘vaccine hesitancy’ in their constituencies, the remarkable Dr Tess Lawrie is continuing to try to persuade medical colleagues to pause the rollout.

She sets out her case simply and powerfully in this interview with Mark Dolan of talkRADIO, aired on Wednesday. Well worth watching, and it could be sent to friends and relatives who are wondering who to believe on the issue.

Dolan, who has had both doses of the vaccine himself, puts questions reflecting the perspective held by most people, that the vaccine is safe and effective, as repeatedly advertised by the NHS.

Lawrie, who founded the Evidence-Based Medicine Consultancy Ltd, a specialist firm committed to improving the quality of healthcare through rigorous research, shows a cool authority in her replies.

‘I’ve looked at the data and I think there is reason to pause,’ she says. By the end of June, 300,000 people had reported adverse events through the UK regulator’s Yellow Card system after taking the vaccine, and this is not normal.

‘If you take a vaccine like tetanus, around since 1968, there are 36 deaths attributed to it on the World Health Organisation (WHO) database, whereas six to seven thousand deaths have been reported from Covid vaccine in just a few months.

Pressed by Nolan on whether this meant the need for a pause, even though the reports do not prove cause and effect, she says: ‘I tend to adopt the precautionary principle. I think if there’s any cause for concern, especially in view of these alarming numbers of reports, we need to get more information, and follow up each and every report to find out a bit more about its association – indeed, is it a cause for concern.

‘I feel there is a lack of transparency from the regulatory bodies. In their report, they highlight a very rare brain clot, cerebral venous sinus thrombosis, and that there have been 30 deaths associated with this and a couple of hundred cases.

‘But when you look at the Yellow Card data, you find there have been 2,208 strokes reported – a brain bleed – and of those, 154 people died. These data are far more worrying to me than just the cerebral venous sinus thrombosis data.

‘And when you look at all sorts of bleed, and the causes of death overall, you see that many are associated with bleeding and clotting. We’re seeing brain clots and heart clots and lung clots. The commonest causes of death are brain clots – strokes – and then pulmonary embolism, which is a lung clot, and also heart clots – heart attacks. I personally think these should be investigated.’

Dolan: Wouldn’t pausing the vaccine rollout put us back into the mess of the pandemic?

‘Not really, because we now know there are many safe, effective treatments for Covid. It is not an untreatable condition. There’s a very safe medicine called ivermectin, very low-cost, and around for 40 years, registered on the WHO’s database since 1992. And they’ve only registered 20 deaths since 1992. It’s been given billions of times, used against tropical parasites and available over-the-counter in many countries.’

Dolan: Should the vaccine be given to children over 12?

‘It’s unnecessary and dangerous. A child has more chance of dying from a vaccination – looking at these figures – than they do from Covid.’

Dolan: Is the relatively small risk from the vaccine better than getting Covid? It’s certainly a nasty virus.

‘I think we all have a robust immune system, if you’re not vulnerable and not very elderly. Our immune systems are geared up to deal with viruses, bacteria and others. A lot of the side-effects we see from Covid – the long Covid and so on – can be prevented by early treatment.

‘The doctors using ivermectin say you don’t get long Covid if you treat with it in the early stages. If you’ve got a treatment for Covid, you don’t have to be afraid of Covid.’

Dolan: What’s your professional verdict on 16 months of rolling out lockdowns in the UK and across the world?

‘I haven’t seen any good evidence that lockdowns or masks work. More concerning, we’ve known that ivermectin works for some time, and doctors have been trying to communicate this message to the authorities, who have been very single-minded in their strategy and approach. If ivermectin had been employed last year, when the UK authorities were notified, there would have been no lockdown in my opinion.’

Dolan: Why do you think your message about applications such as ivermectin were ignored?

‘I think there are a lot of forces at play . . . Covid is probably a £100billion-a-year industry, and ivermectin and other generic medicines are very cheap.’

Lawrie adds: ‘I think it’s time everybody took more responsibility for their health. Get themselves in better shape, be careful of what they eat – not just the quantity and the calories, but the nutritional value; exercise, and sunlight, and including taking responsibility for getting the information. Anybody can go to the Yellow Card system and have a look at the data. It’s not that easy on the government system, but there is a group called UK Column with a website that’s really easy to navigate. They update the data every week. You can type in a problem, and see what other people are reporting too.

‘I would encourage everybody, if you have the vaccine today and tomorrow you have some kind of problem, to report it – it may be associated with the vaccine, and there might be many other people who are suffering a similar thing. It’s only by highlighting these things that we will be able to ask the government to investigate.’