Scores of amateur videos recorded on smartphones were uploaded on Facebook, where cries of panic-stricken Hindu women, girls and children were heard

Cricket star and former captain Mashrafe Bin Mortaza of the Bangladesh team posted a touching reaction on his Facebook account, rueing the mayhem and carnage carried out against the Hindu community in Bangladesh over the last few days. 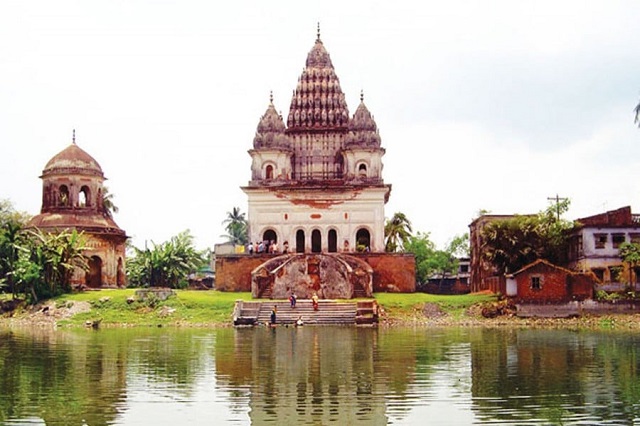 The ruling Awami League lawmaker Mortaza posted a picture of the burning village in Rangpur, where hooligans torched homes of the Hindu community.

The Facebook post says: “Saw two defeats last night. One was the Bangladesh cricket team’s and that one hurt. The other one was a defeat for the whole of Bangladesh, which tore my heart to pieces.”

Bangladesh has once again plunged into racial riots during the annual Durga Puja festival since 13 October. The hooligans armed with metal bars, bamboo and batons vandalised, ransacked, desecrated temples and makeshift Durga Puja sites. They torched thousands of homes of the Hindu community and looted business establishments in half of the cities and district towns in the country.

“This isn’t the first time that minorities in Bangladesh have come under attack,” Amnesty International’s South Asia campaigner, Saad Hammadi. “Targeting religious sensitivities to stoke communal tension is one of the worst forms of human rights violation.”

Hindus of Bengal had witnessed the infamous 1946 Noakhali Riot and Kolkata Killings as a prelude to the bloody partition. In 1964 a sectarian violence erupted in Bangladesh on the alleged theft of hair of Muslim’s most revered prophet Muhammad in Kashmir, India.

Of course, the genocidal campaign in 1971 by Pakistan military forces, the second such genocide after the Second World War after that of the Nazis in Germany, also had targeted the Hindus to exterminate them from East Bengal.

Rana Dasgupta, a lawyer and general secretary of Bangladesh Hindu Buddhist Christian Unity Council (BHBCUC) said “It is unfortunate that a majority of the grassroots leaders of the ruling Awami League were also seen with the rioters.”

The Unity Council lamented at a press meet in Chattagram port city said they have lost faith in the political leadership for their failure to protect the vandalism and discretion of Hindu temples and makeshift Durga Puja altar.

Well, the rioting occurred when the civil and police administration apparently did not swing into action, Dasgupta lamented. Scores of amateur videos recorded on smartphones were uploaded on Facebook, where cries of panic-stricken Hindu women, girls and children were heard.

Most eyewitnesses in social media claimed that the attire of the hooligans was in shirt and trousers, not wearing caps, sporting beard in kurta and pyjama, traditionally worn by Islamists or Madrassah students.

Months after the brutal birth of Bangladesh, the first Durga Puja festival in 1972 was attacked in capital Dhaka, Chittagong and elsewhere and police pointed fingers towards the defeated henchmen of Pakistan military forces.

Everybody believed the story. When intermittent incidents occurred almost every year, civil society, human rights groups and media paused briefly to review what went wrong with the vision of secularism and pluralism.

It was a nightmare for the Delhi government to manage the crisis. Plus hundreds of officers and soldiers revolted and joined the Mukti Bahini along with tens of thousands of barefoot guerrillas were recruited from among the students and farmers to resist the marauding Pakistan military.

The bloody war was fought and won to establish an independent Bangladesh based on secularism, pluralism and democracy.

In the fifth year of independence, the architect of Bangladesh Sheikh Mujibur Rahman was assassinated in a military putsch and thus the nation plunged into perpetual darkness.

Revival of Islamism surfaced and local henchmen indicted for crime against humanity and waging war against Bangladesh were released after the “Collaborators [of Pakistan] Act, 1972” was scraped by a military dictator General Ziaur Rahman, a liberation war hero.

Parties propagating religion was banned in the 1972 constitution. The military junta amended the law and allowed Islamist parties to function. Promptly the Jamaat-e-Islami, an active collaborator of the Pakistan military surfaced after long hibernation with new vigour and resurgence of political Islam.

In 2001 the Islamist party joined the electoral alliance with the rightist party Bangladesh Nationalist Party (BNP) led by Khaleda Zia.

Hours after the result of the unofficial elections were announced, the hooligans unleashed a countrywide reign of terror against Hindus, as well as opposition Awami League supporters. Thousands were maimed and police refused to register cases against the perpetrators.

In 1992, violence was unleashed against the Hindus by Islamists in protest against the demolition of the controversial Babri Masjid. The sectarian violence continued from December 1992 till March 1993. The 12th-century heritage Dhakeshwari temple was attacked during the racial riots.

For 20 years, the persecuted Hindus, Christians, Buddhists and Adivasis did not receive justice, not to speak of compensation.

Also, the Ahmadiyya sect of Muslims was not spared by Islamists. The ruling party remain silent and believes the Islamist version that the Ahmadiyya’s are heretic. On every Friday Jumma prayer, the Islamist march in front of the Ahmadiyya mosque chanting slogan to ban the heretics and shut down their mosque.

Nevertheless, the ripple effect has begun. And protests are being held in all educational campuses, cities major intersections and in front of the press clubs all over the country.

The 1971 liberation war veteran Sachin Karmakar, a retired Mukti Bahini commented that the successive governments in a bid to win the heart of the Islamists on their side have dug canals and invited crocodiles for the protection of their thrones. Now the hungry crocodiles are chasing us as their prey?

Saleem Samad is an independent journalist and columnist based in Bangladesh, a media rights defender. Recipient of Ashoka Fellowship and Hellman-Hammett Award. He could be reached at [email protected];Twitter: @saleemsamad