The murderers belonged to an upper-caste family and there was a land dispute between the two parties.

Indian Congress general secretary Priyanka Gandhi Vadra was deeply in a state of shock when she went to meet the relatives of the Dalit family whose four members were brutally murdered on 27th November 2021 in Uttar Pradesh’s Prayagraj district. She said talking to the media with tearful eyes, “What happened to Arun Valmiki in Agra, what happened in Hathras and what is happening here in Prayagraj District? If Dalits are continually being tortured, what is the point of celebrating Constitution Day? Why isn’t the administration doing anything?” According to the details provided by different media outlets, the victims were assaulted with an axe. The four members included a 50-year-old man, his 47-year-old wife, 17-year-old daughter and 10-year-old son. 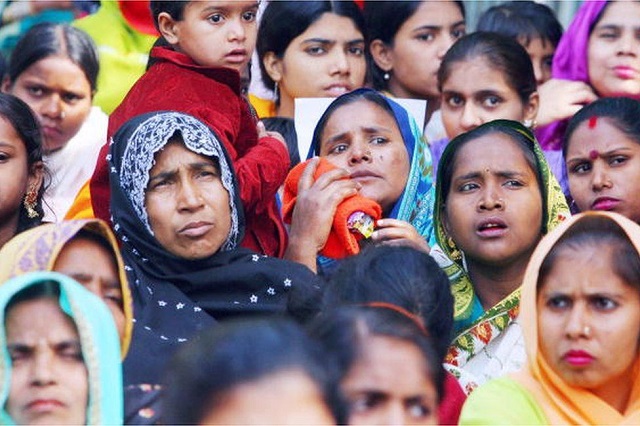 They all were found dead on their beds inside their home in Prayagraj district on Thursday morning by relatives. NDTV reported that the 17-year-old girl among the deceased was gang raped before the murder. The murderers belonged to an upper-caste family and there was a land dispute between the two parties. According to the relatives and neighbors, the murderers had so many times issued physical and verbal threats to the Dalit family after which the family had approached the local police station to lodge an FIR but was rebuffed. More pathetic is the fact that the police mocked at the women in the family when after the incident they reached police station searching for help. The women in the family are still in a state of terror and fright that they may face harassment again. Some of the local residents were of the opinion that the situation could never be such dismal if the victims were from some upper-caste.

It is very unfortunate that the Dalit Hindus are continuously maltreated by the upper-caste Hindus in India and more pathetic is the fact that neither the police nor the administration is willing to listen to them and redress their grievances. The gang rape and murder of a 19-year-old Dalit girl in a village in the north Indian state of Uttar Pradesh last September is the worst example in this context. Now more than a year has passed away but still the family of the victim is waiting for justice. “Of the 104 witnesses only 15 have deposed in the court so far”, said Seema Kushwaha, the victim’s lawyer. She further said talking to Al Jazeera that all hopes for justice are fading as the case has dragged on. The Al Jazeera said reporting upon the case, “The case made it to global media headlines after the body of the girl was cremated in Hathras, about 200km from the national capital, New Delhi, in the early hours of September 30 last year without the family’s consent. The police were also accused of initially refusing to register the first information report and did little to support the vulnerable family.” In spite of all non-cooperation from the police and the judicial system and from the administration, the family of the victim is not ready to stop following the case in the court. The victim’s mother, Rama Devi, 50, said talking to the media, “We will not immerse the victim’s ashes until the perpetrators are punished. We will not perform the last rites before justice is served.” The father of the victim, Om Prakash, 53 said, “We are poor but we will fight this till the end. It’s the least we have to do for our child.”  The four accused involved in this gang-rape are all upper-caste men from the Thakur community and they are very well aware of the fact that they would be declared innocent whenever the court-hearing would reach some final stage. Reports say that an astounding 40 million cases are pending in India’s lower courts and most of the pending cases are linked with exploitation of the low-caste Hindus. This sad incident had taken place at Boolgarhi village where there are just 250 homes out of which only four belong to Dalits; say media reports. These four families are leading a life worse than the animals. It is the case not only in Boolgarhi village, the Dalits have to face the same situation of humiliation and disgrace everywhere.

Though the Dalits have different representative organizations but those organizations are not in a position to resolve the challenges faced by the community.  The National Confederation of Dalit & Adivasi Organizations commonly known as the NACDAO is also one of such organizations whose working is limited only to making reports and doing surveys. A recent report of the NACDAO says that the worst thing the Dalit community has to face very frequently is sexual violence. Between 2016 and 2019 crime against the Dalit women went up by 66.7 percent in Uttar Pradesh which is the highest increase in any state of the country. During the same period rape cases against the Dalit women went up by 20.67 percent. Another very dark side of this picture is that the police is never helpful if the victim is from Dalit community.

A few days back a Pakistani model uploaded on social-media the pictures of her photo-shoot at Gurdwara Darbar Sahib in Kartarpur. She was bareheaded during the photo-shoot and her dress up was not suitable for going to such a sacred place. The whole of Pakistani nation condemned her for that nonsense behavior. The model later admitted her mistake, deleted the photos and posted an apology on her Instagram page but some Indian newspapers and TV channels, run by the Hindu extremists, seemed unwilling to accept her apology. These channels tried all their best to exploit this incident by raising hue and cry against Pakistan and against the Sikh leaders who say that Pakistan is their second home. If these newspapers and channels had raised their voices over human rights exploitation of the Dalits and so many other minorities in India, situation could have been far different and far better.