The IMF has come up with two downside scenarios: one in which emerging countries are hit by a new wave of the virus this year and advanced countries rapidly reverse stimulus policies in the face of rising inflation; and a second in which rising infections affect rich countries as well as poor.

The International Monetary Fund has warned the world economy risks losing $4.5tn from highly infectious variants of Covid-19 spreading through poor countries where vaccination rates are lower. It is calling on rich countries to take urgent action to share at least 1bn doses with developing nations, or risk severe economic consequences. The IMF has joined the World Health Organization, the World Bank and the World Trade Organization in urging the wider deployment of vaccines across the developing world. 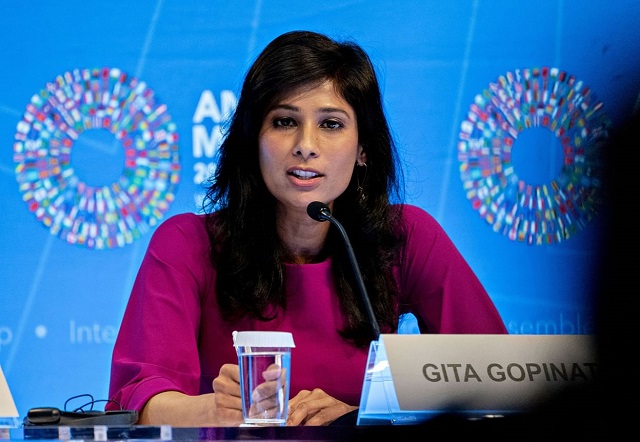 The IMF has come up with two downside scenarios: one in which emerging countries are hit by a new wave of the virus this year and advanced countries rapidly reverse stimulus policies in the face of rising inflation; and a second in which rising infections affect rich countries as well as poor. In the first scenario, global growth would be 0.75% lower this year and 1.5% lower next than the IMF is currently forecasting. In the second, 0.8 percentage points are shaved off growth in both years. In both cases, the global economy ends up $4.5tn  smaller than expected by 2025.

The IMF said the gap between rich and poor economies had widened during the pandemic and risked worsening further next year.  Rich countries have the financial power to support their economies through the crisis while poor countries do not. A new north-south divide is opening up. Better-off countries can look forward to life returning to something like normal by the end of the year, but the less fortunate nations still face rising infection rates and death tolls.

Vaccines have improved the economic outlook in wealthier countries, including the UK, while a lack of resources to improve vaccination rates and support the reopening of their economies has depressed growth rates across low-income countries. The IMF said financial markets could be thrown into panic if the virus was believed to be spreading out of control, restricting lending and investment, and lowering the potential for growth over many years.

IMF’s chief economist, Gita Gopinath, said: “A worsening pandemic and tightening financial conditions would inflict a double hit on emerging market and developing economies and severely set back their recoveries.” Gopinath said: “Multilateral action is needed to ensure rapid, worldwide access to vaccines, diagnostics, and therapeutics. This would save countless lives, prevent new variants from emerging, and add trillions of dollars to global economic growth.”

Global GDP fell from a peak of $87.6tn in 2019 to $84.7tn last year, meaning that a $4.5tn loss over four years would knock 1.3 percentage points off the world’s annual GDP growth. The IMF’s most recent proposal to end the pandemic sets a goal of vaccinating at least 40% of the population in every country by the end of 2021 and at least 60% by mid-2022 at a cost of $50bn. Vaccine supplies and deliveries to low- and lower-middle-income countries must increase sharply to meet the proposal’s targets. Close to half of countries recent daily vaccination rates fell below the rate needed to meet the 40% target by the end of 2021.