Excerpts from the book Where the Gods Dwell: Thirteen Temples and their (hi)stories published by Westland Books

In the mid-nineteenth century, there was a maharajah in Travancore who was a man of great originality. Though in his kingly avatar he was hesitant to challenge antiquated customs, as an individual he was unorthodox. He sat for portraits in Western coat and trousers and watched Englishmen down meaty, ‘impure’ dinners. An amateur doctor and chemist, he loved the idea of modern science, having his craftsmen build him a skeleton of ivory so he could study anatomy undefiled by human bones. Even as he spent astronomical sums on grand old Brahminical rites, he did not hesitate to ensure his children learnt English, with Christian scripture for textbooks. But if the maharajah was a social success in colonial circles, as a ruler his political record was less unblemished. Reports circulated of outrageous abuses in his government, and, worryingly for his British bosses, of Travancore’s finances being in the red. Less than a decade into his reign, then, a ‘most dreadful’ communique arrived at the palace, warning the man to mend his ways.1 And at the top of the list was an urgent need to balance his accounts and pay off his arrears—or prepare for ominous talk of annexation and intervention from upstairs. 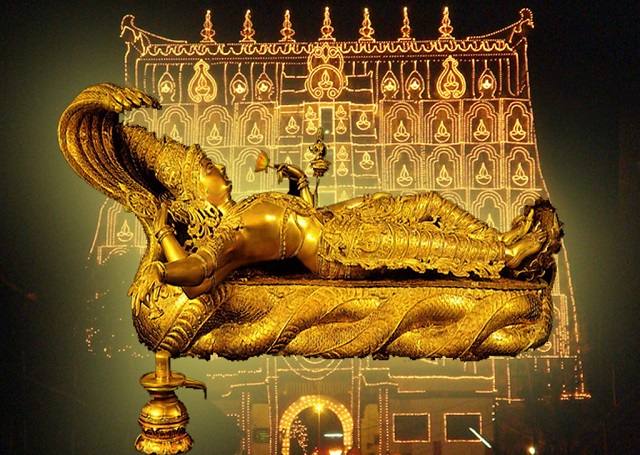 ‘The descent of this thunderbolt’, his nephew would write, created an ‘immense stir’. While reining in corruption and improving efficiency were doable with a new crop of assistants, where was money to be found to stave off immediate pressure? In his hour of need, therefore, the maharajah turned to his deity—and not for spiritual consolation alone. The Padmanabhaswami temple, dynastic shrine to Travancore’s kings, was a splendidly wealthy institution, even if in appearance it pales before the great shrines of neighbouring Tamil provinces. It owned tens of thousands of acres of agricultural real estate, besides a hoard of treasure, maintaining all along a handsome liquid fund for contingencies. While in theory these were the deity’s goods, with the state in dire need, the royal application for help was received sympathetically. And so, half a million rupees were loaned to our kingly supplicant, at an interest rate of five per cent. Or as the maharajah’s nephew put its less delicately: ‘The ancient vaults of the great Pagoda were ransacked, and five lakhs of rupees scraped out’, so that over the next few years the eye of the white man in British Madras could be warded off this southern principality.

That Padmanabhaswami saved Travancore from the British in the 1850s is not surprising, given how the deity had helped in the very making of the state a century before. In fact, to visit the temple is to straddle several ages. There are cameras and glimpses of ugly wiring to remind us of our own world today, while grand old structures tell stories from many yesterdays. There is the seven-storied gopuram, a hundred feet high, with stucco and brick sculptures featuring Vishnu’s incarnations and puranic figures. There are gilded pillars and magnificent corridors, held up by carved granite: the work of a proverbial ten thousand hands and a hundred elephants. There are mural paintings of great charm and beauty, and shrines to minor gods with their own mythologies. There is the ottakkal mandapam, carved from a single rock that took forty-two days and men from a dozen villages to drag from a nearby hill. And then there are the anecdotes that circulate: one narrates that with all the hacking and sculpting while making these eighteenth-century structures, granite chips were strewn around the seven-acre premises. The clean-up was so slow, that the king himself carried a load—at once, all those watching joined in, and the place was cleared up in no time.5 For in the presence of the divine, even the sovereign was a servant.

The Padmanabhaswami temple’s present-day incarnation, in fact, is tied specifically to the life of this load-bearing king, Martanda Varma (reigned 1729–58). Once upon a time, the complex wore a simpler look, like most Kerala temples: the principal entrance was not a Tamil-style stone gopuram, but followed the padippura design familiar to Malayalis, with gables and a thatched roof. The great corridor with its 365 pillars did not exist—why, even the image of the deity was made of wood, and not with the 12,008 sacred saligrama stones that we behold today. It was in the fourteenth century that an ancestor of the Travancore maharajahs gave the place a splash of glamour through a reconstruction. But this again—in consonance with the Kerala style—elevated delicate woodwork and carpentry, not stately stone and granite as preferred 400 years later. Most of its results were lost, however, in 1686: a fire devoured the temple, burning even the roof of the sanctum. Precious metals and gems stored there burst onto the ground, while the deity’s idol was scorched, losing fingers and toes. The kings who reigned thereafter—rulers of a tiny kingdom with limited means—could only make modest repairs, and it fell on Martanda Varma to rebuild Padmanabhaswami’s abode, giving it a fresh, enduring air of grandeur. 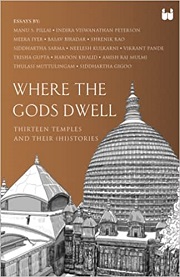 This maharajah’s official narrative—one which weds dynasty to deity with an umbilical bond—is interesting. The Sanskrit Balamartandavijaya begins with the young Martanda Varma recalling a vision he has had. He was commanded, he tells his minister, by Padmanabhaswami himself to renovate his shrine, which had languished for too long in gloomy disrepair. But because the mission entailed a massive outflow of funds, and as the deity knew that Martanda Varma could barely make ends meet, the king was granted heavenly sanction to subdue other princes; he was to seize their territories and place their wealth at his patron god’s disposal. And that is precisely what he did: he marched out, vanquished his neighbours, and returning with their riches, not only gave the deity a befitting home, but also dedicated his conquests to the lord, ruling thereafter as regent. Indeed, when construction was finished for most part, and the new image ready for consecration in the sanctum, it was Martanda Varma himself who affixed the gold finials atop its vimana. And as is well known today, ever since 1750, after a rite called trippadidanam, the kings of Travancore ruled their country as Padmanabha Dasas—servants of god—a title worn so seriously that after Independence, the last maharajah was hesitant to take an oath as head of state, because he did not believe he was its head in the first place.

That said, while the Balamartandavijaya amplifies royal connections with the temple, the site in its own right has legends that predate all kings. Though orthodox tradition places the temple’s consecration on the ‘first day of the Kali Yuga’ (the last of four Hindu time cycles), giving it a 5,000-year provenance, historians have settled on the eighth and ninth centuries CE as the more reasonable date for the event. Several major shrines in Kerala belong to this period—such as the great Siva temple at Kandiyur—and a reference in the verses of the contemporary Vaishnava saint Nammalvar evidently praises this temple in Thiruvananthapuram. But even the traditionalists have more than one origin myth, depending on who, and of what class and caste, is narrating the story. Indeed, the two most popular versions repeated today feature Brahmins as founders of the shrine, while a third, barely mentioned now, ascribes that honour not to a high-caste man but a Dalit woman, and her encounter with the divine.13 As with most legends and oral narratives, though, echoes of truth exist in all versions. These, when read together, help reconstruct the evolution of a local house of worship, venerated by the smallfolk, into a major institution that later shaped Travancore’s kingship.

The Brahmin stories follow the same pattern, but with different protagonists: in one, it is a saint called Divakara Muni, while in the other it is Vilvamangalam Swamiyar, linked with multiple temples in Kerala. The broad arc is as follows: the saint, a devotee of Vishnu, was engaged in intense meditation, when a little boy would, seemingly out of nowhere, appear and disturb him. In one instance, the protagonist, eyes shut, smacks the boy with his hand, while in another, when the child picks up the man’s saligrama and irreverently puts it in his mouth, he is given a serious dressing down. In both cases, the boy vanishes with the words, ‘If you wish to see me again, you can find me in Ananthankadu.’ Realising that the mischievous disruptor was none other than Vishnu himself, the saint wanders in search of the place mentioned. In one version, the man gets there himself, and sees the boy disappear into the hollow of an illupa tree, while in the other, he passes a Pulaya woman, and hearing her berate an irritating infant—‘If you keep crying I’ll throw you into Ananthankadu!’—has her show him the way. Either way, the tree crashes down soon enough, and Vishnu appears in ananthasayanam, as Padmanabhaswami. Indeed, we are told, it was with the wood of the same illupa that the original image of the deity was constructed, to which pooja was done till Martanda Varma installed the present one.

Click here to order your copy of this book