The farmers in India continue to fight in a struggle they share with farmers everywhere throughout the world.

On November 19, 2021, India’s Prime Minister Narendra Modi said, “[W]e have decided to repeal all three agricultural laws.” The prime minister was referring to the three agriculture laws that were rushed through the parliament in 2020. During his speech to announce the rollback, Modi told the farmers that they “should return to [their] homes, fields and to [their] families. Let’s make a fresh start.” At no point did Modi admit that his government had passed laws that would negatively impact the farmers, who have spent a year protesting the laws thrust upon them. 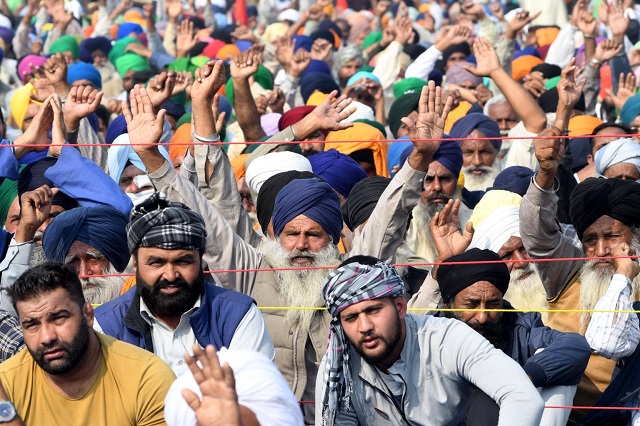 It seems likely that Modi will not give up on his policies to privatize agriculture, but rather will return to them with different packaging. “Our government has been working in the interest of the farmers and will continue to do so,” he insisted.

Jubilation at the Victory

The idea that Modi’s BJP-led government had been “working in the interest of the farmers” was not apparent to the protesting farmers. To gauge the sentiment of the farmers and their organizations, I interviewed Dr. Ashok Dhawale, the national president of the All India Kisan Sabha—one of the key farmers’ associations—and a leader of the Samyukta Kisan Morcha (SKM)—a United Farmers’ Front. Dhawale told me that Modi’s promise to repeal the three farm laws “is a classic case of too little, too late.” It is “too little” because Modi only accepted one of the farmers’ demands (repealing the laws) and not the slate of other demands, which included the creation of a robust minimum support price (MSP) structure; it is “too late” because during this year-long protest, 700 farmers have lost their lives due to the privations of the protest and government repression.

“This is only the second time in the last seven years of his rule that Modi has been forced to make a humiliating climbdown,” Dhawale told me. “The first was in 2015, when he was forced to take back the Land Acquisition Act [of 2013], again as a result of a countrywide farmers’ struggle.” Since Modi came to power in 2014, he has pushed an agenda to deliver Indian agriculture to the large corporate houses. But the farmers fought him then and continue to fight him now.

The farmers have not left their protest encampment despite Modi’s statement on November 19. “They will stay put until these hated farm laws are actually repealed by [the] parliament,” Dhawale told me. “And also, until their other demands are… [met]. All over the country, there is jubilation that one part of the battle has been won. But there is also [a] determination to see that the other just demands of this struggle are conceded.”

Dhawale said that there are several reasons why Modi decided to repeal the three farm laws. The first has to do with the upcoming regional elections in the three key states that border India’s capital, Delhi (Punjab, Uttarakhand, and Uttar Pradesh). In recent months, the BJP saw its supporters dwindle in number during the by-elections that took place in the Indian states of Haryana, Himachal Pradesh, and Rajasthan—in which the BJP did not perform well. These six states in northern India where elections have either taken place or are scheduled to take place are in close proximity to Delhi and are the states from where many of the farmers joined the protests, which took place at Delhi’s border. If the protests had continued, the leaders in the BJP felt that the party would see major attrition not only among the farmers and working class but also among sections of the middle class in India.

Nothing is more important to focus on, Dhawale said, than the actual struggle and determination of the farmers. On September 5, for instance, the farmers organized a Kisan Mahapanchayat (a mass meeting of farmers), which was called by the SKM and saw a huge turnout. The tone of the meeting was fierce, with the farmers clear that they were not only fighting against these three laws but also against the entire approach of the BJP government. The tenor of the protest was to fight for a secular and socialist India, a vision diametrically opposed to the political ideology of Modi’s far-right Bharatiya Janata Party known as Hindutva.

The tempo of the struggle began to increase through September. On September 27, the SKM called for a general strike across India (Bharat Bandh), which was the third such strike during this year-long protest by the farmers. It was “the most successful of the three,” Dhawale said, with millions of people joining the struggle. A month later, on October 18, the farmers blocked train tracks (Rail Roko) across the country against the BJP government, which had tried unsuccessfully to use religious differences to divide the farmers.

Despite Modi’s announcement to roll back the farm laws, tens of thousands of farmers planned to gather at Delhi’s borders on November 26, the first anniversary of the farmers’ revolt, with others protesting in solidarity around the country. To build toward this, on November 22, after Modi’s surrender, leaders from the farmers’ organizations met at a large Kisan Mahapanchayat in Lucknow (the capital of the Indian state of Uttar Pradesh) to pledge to continue the struggle. “The mood of victory and determination was infectious,” Dhawale told me.

Between 1995 and 2018, 400,000 Indian farmers have committed suicide, 100,000 since Modi took office in 2014, Dhawale said. Their deaths are directly linked to the agrarian crisis in India produced by a combination of the withdrawal of state regulation and intervention on behalf of the farmers and the impact of the climate catastrophe.

In 2004, the Indian government asked the eminent scientist M.S. Swaminathan to lead the National Commission on Farmers. By 2006, the commission produced five landmark reports with a long list of important recommendations. Almost none of the substantial recommendations have been adopted by the successive governments. One of the recommendations was to increase and strengthen the MSP for farmers. Window dressing by governments has not improved the situation for the farmers; a recent survey shows that the farmers’ incomes have declined.

Farmers know what they want, and they have said so clearly: price supports, loan waivers, withdrawal of electricity price hikes, repeal of the labor codes, subsidized costs of fuel, and so on. These issues, Dhawale said, “are at the root of the agrarian crisis and massive peasant indebtedness. They lead to farmer suicides and to distress sales of farmlands.”

“If farmers are to grow our food and farmers are to eat, then the demands of the farmers must be met,” Dhawale said. This is not just a cry for Indian farmers. The farmers in India continue to fight in a struggle they share with farmers everywhere throughout the world.