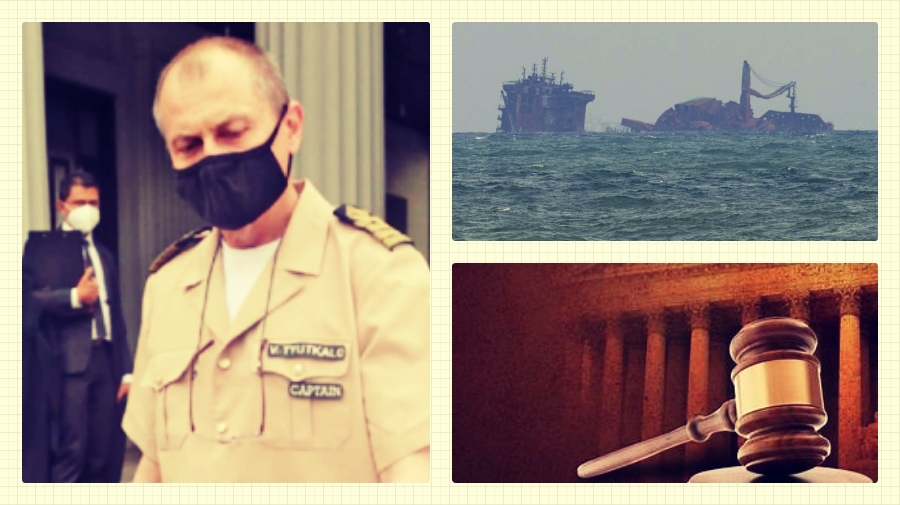 When the captain of the Express Pearl ship that caught fire near the Colombo harbour was produced in court yesterday, the captain of the ship, Sarath Jayamanne, PC, who appeared on behalf of the Russian national, said that although the responsibility of extinguishing the ship lies with Sri Lanka, which is located in the nearest port, the fire does not occur promptly. That an intention to compensate for the loss was identified. He said it was doubtful whether the Navy and Ports Authority officials who had been aboard the ship for an hour and a half when the smoke began to emit did not put out the fire to seek compensation.
Mr Sarath Jayamanne informed that the ship driven by the client was about two days later than the scheduled date of arrival at the Port of Colombo and that this was due to the storm surge in the sea and that he first observed the smoke rising from the container of the ship. He said that the Ports Authority and all parties, including the shipowner, were informed at the same time.

At around 4.30 pm that day, a group of Navy and Ports Authority officials arrived on the ship, and they spent about an hour and a half checking the smoke and leaving to inform the Harbor Master that nothing had happened, but at night the ship’s smoke began to rise. He told the court that the captain and officers had sent messages to all, including the Harbormaster, and that the Harbormaster, who was active at the time, had sent several tugboats to put out the fire for the first time, but they were not enough to put out the ship’s fire.

Mr Jayamanne then told his client that the ship had caught fire for several days and had sunk for several days, raising doubts as to whether the fire had not been extinguished in the first instance in the hope of obtaining compensation. He said some of the ship’s debris could have been dumped into the sea in an attempt to dispose of it.

The captain was arrested for dumping waste into the sea under Section 12 of the Maritime Security Act.
Deputy Solicitor General Madhava Tennakoon, who appeared with the CID on behalf of the complainant, said that the incident had caused irreparable damage to the Sri Lankan coast for thousands of years.
When the ship caught fire, the crew, including the suspect, put it out. Mr Madhava Tennakoon stated that the main reason for the incident was not taking action and said that the investigation into the incident is being carried out extensively.
After much deliberation, the judge decided to release the ship’s captain on bail. The judge ordered the CID to appear in court on July 1 to inform the court of the progress of the investigation into the incident on July 01.
Colombo High Court Judge Damith Thotawatte, who was ordered to be released on a bond worth Rs. 2 million, was barred from travelling abroad without court permission.