For too long, politicians relied on the Supreme Court to uphold the right to an abortion. Now that the Texas law has been allowed to take effect, its prime targets are low-income people of color.

Texas, with the help of conservative justices on the U.S. Supreme Court, has made abortion all but illegal for most pregnant people living within state borders. Republican state legislators passed a draconian and diabolically innovative bill that Gov. Greg Abbott signed into law in May ensuring that all abortions after six weeks of gestation can be subject to lawsuits brought by any individual anywhere against anyone involved in the procedure. That includes the patient, their medical provider, or even their Lyft driver. Those seeking abortions will likely need to leave Texas, effectively making the procedure out of reach of the poorest residents of the state. 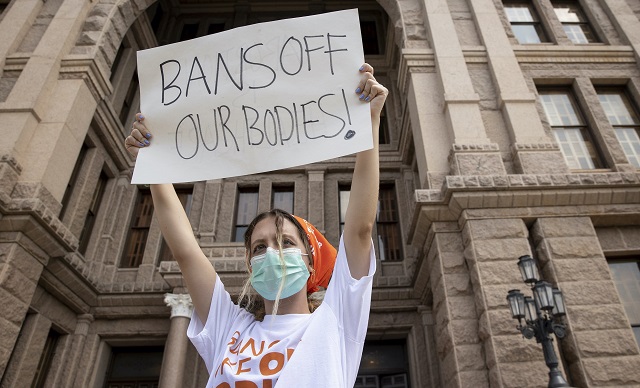 Blair Wallace, of the American Civil Liberties Union of Texas, told NBCNews.com, “We know the brunt of this will fall on our Black and brown communities and our poor communities the most.” Only those with the financial resources and ability to take time off work can travel to neighboring states to terminate a pregnancy. Already abortion providers in Louisiana are fielding calls from desperate Texans seeking abortions, leading to longer wait times.

Imani Gandy, senior legal analyst for RewireNewsGroup.com, explained to me in an interview that the Texas law is “really, really pernicious,” because it is “using taxpayer dollars to provide a bounty for bounty hunters to go attacking or harassing abortion providers.”

In fact, the hundreds of Republican-led state-level legislative attacks against abortion have cost taxpayers millions of dollars in legal fees of both pro-choice and anti-abortion forces. According to the Washington Post, “states have paid at least $9.8 million in abortion providers’ [attorney] fees,” in the last four years alone. This is money that could be put to better use—such as providing health care to low-income residents that includes abortion and other reproductive medical care.

For a party that has been railing in favor of “individual liberties” when it comes to lifesaving masks and vaccinations during a pandemic, asserting that a series of electrical impulses between newly formed cells are more important than a person’s bodily autonomy is the height of hypocrisy and reeks of performative politics.

Indeed, Republicans may be victims of their own success, having relied on the Supreme Court for years to preserve the seminal Roe v. Wade precedent against most egregious anti-abortion laws in order to score political points with evangelical voters. According to one legal analyst for Slate.com, Mark Joseph Stern, “it seems undeniable that Republicans did not anticipate this abrupt triumph over Roe, instead assuming that the Texas law would be blocked by the courts.”

Gandy called the Texas law “patently unconstitutional,” and pointed out that “no federal appeals court has upheld” it, which is why pro-choice activists and legal scholars had expected the nation’s highest court to intervene. Except that the Supreme Court is currently, as Gandy described, “hyperpartisan and captured by conservatives.”

Of the five justices who chose to let the ban remain, three were appointed by former President Donald Trump as a gift to evangelical voters. Robert P. Jones, author of White Too Long: The Legacy of White Supremacy in American Christianity, wrote a year ago that “white evangelicals’ political behavior is animated by racial resentment,” and that this demographic “will be the most powerful force in hindering this work for racial justice and reconciliation.” Given that low-income people of color are likely to be the most impacted by the Texas ban, this prediction appears prescient.

It isn’t solely Trump’s fault that the right to an abortion is on its way out. Maine’s supposedly moderate and pro-choice Republican Senator Susan Collins in 2018 cast a deciding vote for Trump’s anti-abortion nominee for the Supreme Court. In voting to confirm Justice Brett Kavanaugh, who was one of five justices choosing to let the Texas abortion ban stand, Collins now bears partial responsibility for beginning the end of abortion rights in the United States.

Even Democrats bear some blame. A party that has upheld the right to an abortion as the centerpiece of its feminist agenda has done remarkably little to ensure the law is preserved from the Supreme Court’s increasingly activist conservative justices. In the nearly 50 years since the Roe v. Wade decision, Democrats have enjoyed political power in the House, Senate, and White House simultaneously four times—under Presidents Jimmy Carter, Bill Clinton, Barack Obama, and now Joe Biden—and could have passed legislation protecting the constitutional right to an abortion so that it didn’t hinge on the Supreme Court’s political makeup.

In the short term, corporations like Uber and Lyft have offered to pay the legal fees of any of their drivers who might get sued for transporting a pregnant person to get an abortion. Some celebrities are announcing their own boycotts of the state of Texas, and the city of Portland, Oregon, is also considering a boycott.

But none of these commercial responses are a substitute for decisive government action ensuring that all Americans, especially low-income communities of color, have an equal right to access abortion care. In the wake of the Texas abortion ban taking effect, House Speaker Nancy Pelosi announced that the House of Representatives would soon take up a vote on the Women’s Health Protection Act, which, if passed, would ensure that the right to an abortion was cemented in law.

While Gandy denounced Democratic inaction, saying, “we’ve had Democrats in office that have not bothered to codify Roe,” she added that the lawmakers’ inaction “really underscores how powerful the anti-abortion lobby is.” A majority of Americans support the right to an abortion, and yet the demands of the anti-abortion minority have held the nation hostage to its whims.

Although Biden’s Justice Department has filed a lawsuit and is seeking an injunction to stop the law from being enacted in Texas, critics point out that it is a long shot. Now, six other states, including Florida and Mississippi, are hoping to follow in Texas’ footsteps and pass similar abortion bans. The train has left the station, so to speak.

In addition to legislation like the Women’s Health Protection Act, activists want Biden to use his executive powers right now to protect abortion access. Kristin Ford of NARAL Pro-Choice America said, “The White House should make clear their commitment to this critical legislation to ensure no other state has the opportunity to follow in Texas’ footsteps.”

According to Gandy, “the bottom line is, there will always be abortion.” In light of the Texas ban, the questions center on “how people are going to access it, and who the lack of access is going to affect most—which is poor people, and people of color.”

Nations like Poland and Nigeria offer a glimpse of the mental and physical toll in store for Americans if the Texas ban were to take hold nationwide. Polish women are suffering from a mental health epidemic as a result of their nation’s abortion ban. In Nigeria, dangerous back-alley abortion procedures are endangering lives.

Other nations offer a different path. Shortly after the Texas ban took effect, Mexico’s Supreme Court decriminalized abortion, setting the stage for a nationwide legalization of the procedure. And, in France, where abortions are legal for pregnancies up to 12 weeks of gestation, the government says it will begin offering free contraception for everyone under the age of 25.

Here in the United States, California is bucking the terrifying state-by-state anti-abortion trend by considering a bill that will make the medical procedure cheaper, and even free of charge. Already it is one of only six states that require health insurance plans to cover abortion care. California State Senator Lena Gonzalez said, “We’re taking a stance, not just to make abortions available but to make them free and equitable.” Indeed, if such a trend were pursued nationally, the right to control one’s body would not be relegated to the privileged among us.