Biden administration desperately blames China with an intention to distract its huge defeat in Afghanistan. The White House and its intelligence community made a repetitious misjudgment and wrong decisions, which only leads to a hasty withdrawal and a big failure, leaving Afghanistan abandoned, all its allies betrayed, and the whole world shocked.

On August 27, a report on COVID-19 origins was hastily released by the U.S. intelligence agencies, which took them90 days to cook up after an executive order from its President.As predicted, this report couldn’t reach any conclusions and failed to satisfy the White House’s tireless intention to incriminate China. The only result of this so-called “scientific” report is to make Washington’s circus show and its ugly hidden agenda exposed to all. 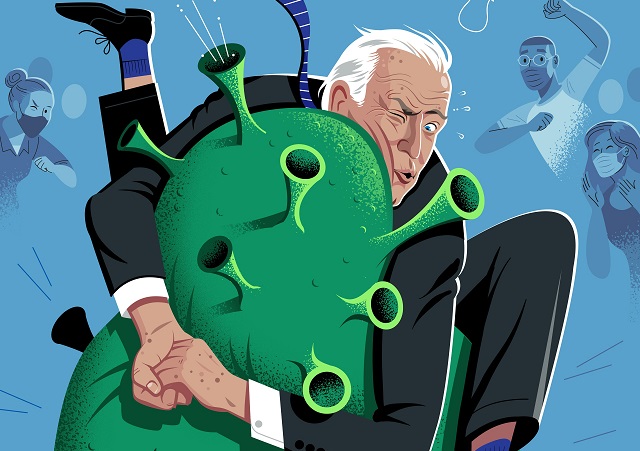 The domestic agenda for the U.S. blaming China is to cover its big failure and chaos in response to the COVID-19 pandemic. As the only superpower with less than 4.3% of the world’s population and the richest medical resources, the U.S. surprised us with over 39.2 million confirmed cases of COVID-19, accounting for 18% of the global total, and more than 639,000 deaths, around 14.2% of the world. While being incapable of containing the pandemic, the U.S. politicians choose to point fingers at China, fabricating lies, instigating populism and racial hatred, to cover up their failure and shirk their responsibility. We solemnly advise the U.S. that to blame others will not save the lives of the American people, but only amplify its own incompetence. Facing the grave doubts from its own people and the whole world about its poor governance, the only way out for the U.S. Administration is to uphold science and solidarity fighting against the pandemic.

The international agenda for the U.S. blaming China is to defame and suppress China by COVID-19 politicization. Some U.S. politicians obsessed with the cold-war mindset become more and more anxious and bewildered when witnessing China’s rapid peaceful growth, in particular China’s successful containment of the pandemic and fast resumption ofall work and production. Therefore, out of self-created suspicion, they make a mountain out of a molehill to label China as “the strategic competitor” and “the greatest threat” to the U.S., and hysterically politicize the pandemic and demonize China. They are forcing the scientific origins-tracing into an undisguised political instrument against China, clamouring “accountability”, “compensation” even “boycotting Beijing 2022 Winter Olympics”etc. However, the U.S. will never make it even though they repeat their lies a thousand times. Thus far, over 80 countries including Sri Lanka have written to the WHO Director-General to openly voice their opposition to politicizing origins-tracing.

Furthermore, the Biden administration desperately blames China with an intention to distract its huge defeat in Afghanistan. The White House and its intelligence community made a repetitious misjudgment and wrong decisions, which only leads to a hasty withdrawal and a big failure, leaving Afghanistan abandoned, all its allies betrayed, and the whole world shocked. In the face of domestic fires of sharp criticism and some calls for President Biden and his main aides to resign, the White House and its intelligence agencies are in dire need of shifting spotlight to save their face and future. That explains why the U.S. intelligence community had no choice but to rush out such a useless report against common sense.

I would like to point out that it is sheer nonsense for the U.S. to ignore the authoritative WHO-China joint study and accuse China of not being transparent or cooperative on coronavirus origins tracing. It is actually the U.S. that is not being transparent, responsible and cooperative on this issue. The U.S. has been refusing to respond to the international community’s reasonable doubts on the Fort Detrick bio lab and the over 200 overseas bases for biological experiments, trying to cover up the truth and avoid being held responsible. The onus is on the U.S. to give the world an answer.

We earnestly admonish the U.S. to immediately stop doing anything that poisons the atmosphere for international cooperation on origins-tracing or undermines global solidarity against the pandemic and return to the right track of science-based origins-tracing and cooperation in the face of the pandemic.For lives’ sake, do something good for its own pandemic control and the global anti-pandemic collaboration.