Wokeness has remade American capitalism in its own image. Talk of being “woke” has morphed into a kind of catchall term for progressive identity politics today.

MY NAME IS VIVEK RAMASWAMY, and I am a traitor to my class.

I’m going to make some controversial claims in this book, so it’s important you know a bit about me first. My parents immigrated from India forty years ago to southwest Ohio where I was born. They weren’t rich. I went to a racially diverse public school with kids who came from difficult backgrounds. After I got roughed up in eighth grade by another kid, my parents sent me to a Jesuit high school where I was the only Hindu student and graduated as valedictorian in 2003. I then went to Harvard to study molecular biology and finished near the top of my class. Rather than becoming an academic scientist, I joined a large hedge fund in 2007 and started investing in biotech. A few years later I became the youngest partner at the firm.

In 2010, I had an itch to study law, so I went to Yale while keeping my job at the fund. After law school, I started a biotech company called Roivant Sciences. My goal was to challenge big pharma’s bureaucracy with a new business model—which proved to be easier said than done. I started by developing a drug for Alzheimer’s disease that resulted in the largest biotech IPO in history at the time, though a few years later that drug failed spectacularly. Failure hurt, and I was chastened by it. Thankfully the company went on to develop important drugs for other diseases that helped patients in the end. I’ve also co-founded a few tech companies along the way, one that I sold in 2009 and another of which is fast-growing today, and now I’m philanthropically active in a number of nonprofit ventures. I know how the elite business world works—and elite academia and philanthropy too—because I’ve seen it firsthand.

I used to think corporate bureaucracy was bad because it’s inefficient. That’s true, but it’s not the biggest problem. Rather, there’s a new invisible force at work in the highest ranks of corporate America, one far more nefarious. It’s the defining scam of our time—one that robs you of not only your money but your voice and your identity.

The con works like a magic trick, summed up well by Michael Caine’s character in the opening monologue in Christopher Nolan’s movie The Prestige:

Every great magic trick consists of three parts or acts. The first part is called The Pledge. The magician shows you something ordinary: a deck of cards, a bird or a man.… The second act is called The Turn. The magician takes the ordinary something and makes it do something extraordinary. But you wouldn’t clap yet. Because making something disappear isn’t enough; you have to bring it back. That’s why every magic trick has a third act, the hardest part, the part we call The Prestige.

Financial success in twenty-first-century America involves the same simple steps. First, the Pledge: you find an ordinary market where ordinary people sell ordinary things. The simpler, the better. Second, the Turn: you find an arbitrage in that market and squeeze the hell out of it. An arbitrage refers to the opportunity to buy something for one price and instantly sell it for a higher price to someone else.

If this were a book about how to get rich quick, I’d expound on these first two steps. But the point of this book is to expose the dirty little secret underlying the third step of corporate America’s act, its Prestige. Here’s how it works: pretend like you care about something other than profit and power, precisely to gain more of each.

All great magicians master the art of distraction—flashing lights, smoke, beautiful women on stage. Today’s captains of industry do it by promoting progressive social values. Their tactics are far more dangerous for America than those of the older robber barons: their do-good smoke screen expands not only their market power but their power over every other facet of our lives.

As a young twenty-first-century capitalist myself, the thing I was supposed to do was shut up and play along: wear hipster clothes, lead via practiced vulnerability, applaud diversity and inclusion, and muse on how to make the world a better place at conferences in fancy ski towns. Not a bad gig.

The most important part of the trick was to stay mum about it. Now I’m violating the code by pulling back the curtain and showing you what’s really going on in corporate boardrooms across America.

Why am I defecting? I’m fed up with corporate America’s game of pretending to care about justice in order to make money. It is quietly wreaking havoc on American democracy. It demands that a small group of investors and CEOs determine what’s good for society rather than our democracy at large. This new trend has created a major cultural shift in America. It’s not just ruining companies. It’s polarizing our politics. It’s dividing our country to a breaking point. Worst of all, it’s concentrating the power to determine American values in the hands of a small group of capitalists rather than in the hands of the American citizenry at large, which is where the dialogue about social values belongs. That’s not America, but a distortion of it.

Wokeness has remade American capitalism in its own image. Talk of being “woke” has morphed into a kind of catchall term for progressive identity politics today. The phrase “stay woke” was used from time to time by black civil rights activists over the last few decades, but it really took off only recently, when black protestors made it a catchphrase in the Ferguson protests in response to a police officer fatally shooting Michael Brown. 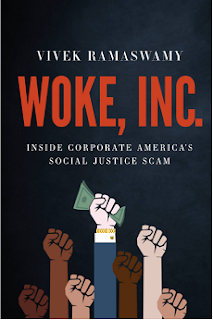 These days, white progressives have appropriated “stay woke” as a general-purpose term that refers to being aware of all identity-based injustices. So while “stay woke” started as a remark black people would say to remind each other to be alert to racism, it would now be perfectly normal for white coastal suburbanites to say it to remind each other to watch out for possible microaggressions against, say, transgender people—for example, accidentally calling someone by their pre-transition name. In woke terminology, that forbidden practice would be called “deadnaming,” and “microaggression” means a small offense that causes a lot of harm when done widely. If someone committed a microaggression against black transgender people, we enter the world of “intersectionality,” where identity politics is applied to someone who has intersecting minority identities and its rules get complicated. Being woke means waking up to these invisible power structures that govern the social universe.

Lost? You aren’t alone. Basically, being woke means obsessing about race, gender, and sexual orientation. Maybe climate change too. That’s the best definition I can give. Today more and more people are becoming woke, even though generations of civil rights leaders have taught us not to focus on race or gender. And now capitalism is trying to stay woke too.

Once corporations discovered wokeness, the inevitable happened: they used it to make money.

Consider Fearless Girl, a statue of a young girl that suddenly appeared one day in New York City to stare down the iconic statue of the Wall Street bull. It was apparently a challenge for Wall Street to promote gender diversity: the placard at Fearless Girl’s feet said, “Know the power of women in leadership. SHE makes a difference.” Feminists cheered. The trick? “SHE” referred not only to Fearless Girl but to the Nasdaq-listed exchange-traded fund (ETF) that her commissioners, State Street Global Advisors, wanted people to buy. State Street was battling a lawsuit from female employees saying it paid them less than their male peers in the firm. Instead of paying women equally, State Street made a statue for them. Fearless Girl was a line item in an advertising budget.

ABOUT AUTHOR: Vivek Ramaswamy is a successful entrepreneur who has founded multiple successful enterprises. A first-generation American, he is the founder and Executive Chairman of Roivant Sciences, a new type of biopharmaceutical company focused on the application of technology to drug development.  He founded Roivant in 2014 and led the largest biotech IPOs of 2015 and 2016, eventually culminating in successful clinical trials in multiple disease areas that led to FDA-approved products.  Mr. Ramaswamy was born and raised in southwest Ohio. He graduated summa cum laude in Biology from Harvard in 2007 and began his career as a successful biotech investor at a prominent hedge fund. Mr. Ramaswamy continued to work as an investor while earning his law degree at Yale, where he was a recipient of the Paul & Daisy Soros Fellowship for New Americans.  Mr. Ramaswamy was featured on the cover of Forbes magazine in 2015 for his work in drug development. In 2020 he emerged as a prominent national commentator on stakeholder capitalism, free speech, and woke culture. He has authored numerous articles and op-eds, which have appeared in the Wall Street Journal, National Review, Newsweek, and Harvard Business Review.  Mr. Ramaswamy serves on the board of directors of the Philanthropy Roundtable and the Foundation for Research on Equal Opportunity.