Despite the World Bank’s catchy slogan ‘Poverty Reduction Throughout the World’, it can’t ensure the communities in poor countries are appropriately served to polish off their impoverishments.

The World Bank is an international development organization owned by 187 countries. Its role is to reduce poverty by lending money to the governments of its poorer members to improve their economies and to improve the standard of living of their people. 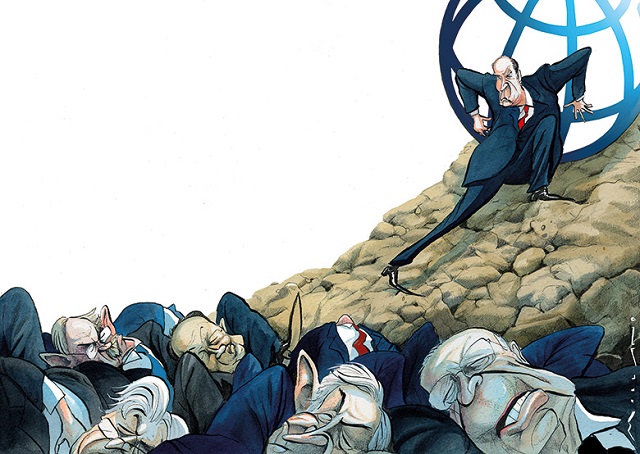 The World Bank was created at the 1944 Bretton Woods Conference, along with the International Monetary Fund (IMF). The president of the World Bank is traditionally an American. The World Bank and the IMF are both based in Washington, D.C., and work closely with each other.

Although many countries were represented at the Bretton Woods Conference, the United States and United Kingdom were the most powerful in attendance and dominated the negotiations. The intention behind the founding of the World Bank was to provide temporary loans to low-income countries that could not obtain loans commercially. The Bank may also make loans and demand policy reforms from recipients. Both the WB and the IMF are purely dictated by the U.S. in their operations.

If we delve into underneath the World Bank, it focalizes massive corruptions – depravities inside it, whereas it is always very point-blank assault on such morally reprehensible activities across the word using the name of poverty reduction throwing dust into the eyes of people enshrouding their real character.

It also rivets on extensive internal problems at the bank including how “kickbacks, payoffs, bribery, embezzlement, and collusive bidding plague bank-funded projects around the world.” The Government Accountability Project (GAP) report focusing on corruption at the World Bank estimates that more than 20 percent of the loans distributed by the World Bank, or US$4 billion annually, are associated with corrupt practices.

In the wake of these findings, GAP again calls upon the World Bank to implement its own “Vaughn Report,” which the bank has had for more than one year, but has not released designedly. The report provides a blueprint for modernizing that institution’s inadequate whistleblower protections. If the Vaughn proposal had been in place at the World Bank during the article’s examples of corruption, many of the issues detailed by this groundbreaking report would have been brought to light sooner, and the resulting damage might never have occurred.

The thorough investigative report details numerous problems at the World Bank. These include the following (with GAP commentary italicized):

Staffers have traditionally been professionally rewarded for ensuring that projects go through as planned, but not for reporting corrupt practices. GAP has information that whistleblowers who report corruption are often punished for doing so.

The bank’s Department of Institutional Integrity (INT) currently has a backlog of over 250 complaints, with only 22 investigators working on them. However, GAP has information that not all these complaints are legitimate, but are instead spurious efforts intended to victimize whistleblowers for reporting corruption. The INT is not independent of the World Bank. The Vaughn Report recommends that conflict-of-interest protocols be put in place to create greater independence.

Last year, the then-INT director imposed a freeze on investigator travel – a “critical element in unearthing corruption” according to both the article and GAP. Along with independence, an effective INT must also have adequate resources and high-quality investigator training.

The Vaughn Report (Part 1, Part 2), released publicly by GAP recently, contains the full recommendations of noted whistleblower law scholar Robert Vaughn of American University Law School. The report, commissioned by the World Bank, but kept hidden from outside view, incorporates “best practices,” many of which have already been adopted by the United Nations.

GAP’s International Reform programme has focalized on the failure of accountability for the US$222 billion-dollar development organization. These new examples of fraud reinforce the need for dramatic reform of the culture of corruption that exists within the global body. US Congress has repeatedly directed the Treasury Department to institute safe channels for reporting corruption, fraud, and abuse to protect America’s US$32 billion investment in the World Bank.

Despite the World Bank’s catchy slogan ‘Poverty Reduction Throughout the World’, it can’t ensure the communities in poor countries are appropriately served to polish off their impoverishments.

The bank’s staff has been increasingly frustrated by the lack of its own leadership specifically in their failures to institute transparent and impartial procedures to protect staff from reprisal for coming forward to tell of misconduct.

“The Bank is uniquely placed to set the highest standards for accountability worldwide,” said GAP’s International Program Director Melanie Beth Oliviero. “Management can no longer point the finger at borrowing countries with lax protections as the source of the devastating cost of corruption. The World Bank itself fosters fraud and abuse within its own organization by silencing many responsible staff members and shielding those who abuse the system.”

The Senate Foreign Relations Committee continues to focus its attention on the need for dramatically improved accountability at all five multilateral development banks. Tomorrow, March 28, the Committee will again hold a hearing with high level Treasury officials and the Executive Directors they appoint to the governing boards of these banks. These witnesses must explain why proven practices of legal protections for whistleblowing, enacted by Congress as recently as last November’s Foreign Operations appropriations law and recommended in the Vaughn Report, continue to be rejected.

The United Nations has already instituted many of these best practices. Since that body’s new anti-retaliation policy, which GAP consulted on, went into effect on January 1 last witnesses to corruption have come forward to help the world peacekeeping body catch wrongdoing before it becomes a major scandal or undermines the overall mission.

During the upcoming annual board meetings of the World Bank and International Monetary Fund in April, GAP will join other international non-governmental organizations to coordinate campaigns that demand bank accountability and an end to policies that allow billions of dollars to be stolen from deserving impoverished people. The early warning of corruption provided by whistleblowers is a proven antidote – the World Bank has the ability to enact this reform easily and its staff is pleading for this action to be taken.