Afghanistan accounts for “80 percent of global illicit opium production,” a pattern that began, ironically enough, in the 1980s, when the CIA waged a secret war against the Soviet occupation of the country and enlisted both Islamic radicals and those involved in the opium trade in this battle.

One of the first announcements the Taliban made after seizing power in Afghanistan in August was that they were going to “ban the production and sale of drugs.” But, as with other promises of change made by the Taliban, from women’s rights to press freedoms, there are plenty of reasons to be skeptical about its claim to ban drugs. 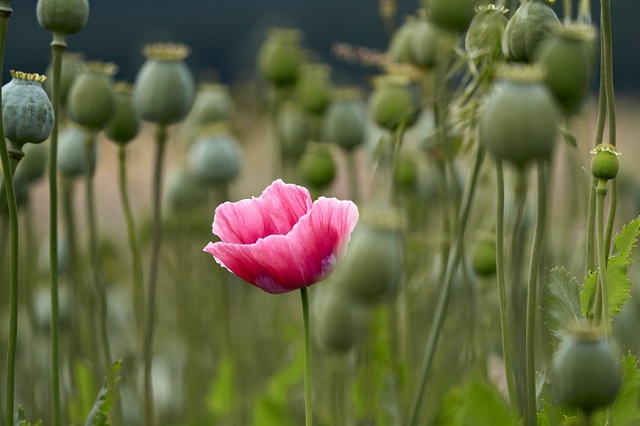 At its first press conference in Kabul on August 17, after entering the city just two days earlier and solidifying their control over the country, Taliban spokesman Zabihullah Mujahid vowed that their new government would not let Afghanistan become a “full-fledged narco-state.” “We are assuring our countrymen and women and the international community that we will not have any narcotics produced,” Mujahid said. “From now on, nobody’s going to get involved (in the heroin trade), nobody can be involved in drug smuggling.”

But, as with the Taliban’s other plans for the country, there is reason to be skeptical about this claim; the notion of a ban on opium production runs afoul of economic and political realities on the ground. The challenge is that the opium crop is a key component of the Afghan economy, accounting for somewhere between 7 percent and 11 percent of the country’s gross domestic product, and bringing in as much as $2 billion in 2019, according to the United Nations Office on Drugs and Crime. The gross income generated from opiates was “also worth between 24 and 44 percent of the value of the licit agricultural sector of the country” in 2018-2019. And now, opium looms ever larger because the major pillar of the Afghan economy was foreign financial assistance—accounting for 40 percent of GDP—which has now vanished, as the West tries to figure out how to deal with the Taliban, which “led a deadly insurgency against the U.S.-backed government” before seizing power.

Opium is also a job creator in a country where opportunities are scarce. The opium harvest “provided the equivalent of up to 119,000 full-time jobs” in 2019. The broader opium economy also supports thousands involved in the domestic trade (opium traders, heroin producers, domestic dealers), those working as service providers in the trade (packers, transporters), and individuals who are internationally connected and are working in the international opium trade. The opium economy is especially strong in areas that have key Taliban support, such as Helmand province in the south of Afghanistan.

Afghanistan accounts for “80 percent of global illicit opium production,” a pattern that began, ironically enough, in the 1980s, when the CIA waged a secret war against the Soviet occupation of the country and enlisted both Islamic radicals and those involved in the opium trade in this battle. Opium “is an ideal crop in a war-torn country since it requires little capital investment, is fast growing and is easily transported and traded,” the State Department reported in 1986.

As historian Alfred W. McCoy, author of the groundbreaking book The Politics of Heroin: CIA Complicity in the Global Drug Trade, noted in 2018:

“As relentless warfare between CIA and Soviet surrogates took its toll, Afghan farmers began to turn to opium ‘in desperation,’ since it produced ‘high profits’ that could cover rising food prices. At the same time, the State Department reported that resistance elements took up opium production and trafficking ‘to provide staples for [the] population under their control and to fund weapons purchases.’

“As the mujahideen guerrillas gained ground against the Soviet occupation and began to create liberated zones inside Afghanistan in the early 1980s, the resistance helped fund its operations by collecting taxes from peasants who grew the lucrative opium poppies, particularly in the fertile Helmand valley. Caravans carrying CIA arms into that region for the resistance often returned to Pakistan loaded down with opium—sometimes, reported the New York Times, ‘with the assent of Pakistani or American intelligence officers who supported the resistance.’”

And nearly four decades later, Afghanistan remains the world’s number one supplier of opium and its derivative, heroin, with the latter going into the veins of habitués from Lahore to London. And now, as the West withdraws both troops and many billions of dollars of foreign economic aid to Afghanistan, and with the key role opium plays in the country’s economy, the Taliban is going to ban it?

It would be a risky move for the Taliban, said Vanda Felbab-Brown, a senior fellow for foreign policy at the Brookings Institution who has written extensively on drugs and nonstate actors, not only in Afghanistan, but also in Africa, Latin America and South Asia.

“The Taliban can risk a ban, but it would be politically costly in ways that are more complex than [they were] in 2000 [when they also banned opium], and it could lead to tremendous destabilization,” she told Drug Reporter in a phone interview. “This is a country where 90 percent of the population lives in poverty. It’s also a situation where many mid-level Taliban commanders are dependent on opium for their income and livelihoods for their fighters. To impose a ban would require the Taliban to maintain a high level of aggression, which would create political fissures and fractures and would play into the hands of other actors. One reason local warlords didn’t fight the Taliban this summer was that the Taliban was promising them access to the local economy, and in many places, that means opium.”

Even in the best of circumstances, replacing a lucrative illicit economy with legal alternatives is a long-term project, and the present circumstances in Afghanistan are not the best, to say the least.

“The Afghan economy is more or less tanking,” Felbab-Brown said. “A massive influx of foreign aid has been an inescapable component of the economic life of the country, and now, the Taliban does not have any way of dealing with stopping opium by delivering alternative livelihoods. Even if they had a well-designed program, you are looking at decades to suppress [the opium trade],” she said.

Still, the Taliban has done it before.

“When it comes to banning opium, we are looking at a possible replay of the 1990s,” said Felbab-Brown. “What the Taliban want is international recognition. In the 1990s, they kept promising they would ban poppies in return for international recognition, but then said they could not do it because they could not starve their people, until in 2000, [when] they did it. Will they risk that again? My expectation is that we are going to see the same bargaining with the international community, but as I said, if the Taliban does try to do a ban, they will struggle to enforce it.”

The Taliban also face a possible loss of the opioid market share if they enact a ban and then change their mind because of adverse circumstances, Felbab-Brown said.

“The difference now is the synthetic opioids,” she said, alluding to the production of fentanyl and its derivatives coming from Chinese and Indian chemical factories. “If the Taliban move to ban [opium] and then decide it is too difficult to sustain [this move] politically or financially, it might not find it easy to just return to the same markets; the European markets, for instance, could be snatched away by synthetic opioids.”

As for how the much-vaunted “international community” should approach Afghan opium production, that’s a complicated question.

“There is no unity in the international community on how to deal with Afghanistan,” Felbab-Brown said. “The Chinese and Iranians are warming up to the Taliban, and the Russians will be urging the Taliban to go for a ban. I suspect the… [talk about the ban] is mainly to satisfy the Russians. But we should not be pushing the ban; that would be catastrophic in terms of humanitarian consequences.”

Efforts by both the Afghan government and the West to suppress the opium trade proved futile throughout the Western occupation, and now the likelihood of any sort of robust international campaign to suppress Afghan poppies appears next to nil. Outside of legalization of the trade, which does not appear even remotely likely, the only alternative for suppressing opium production is to cajole farmers to grow other crops in a bid to wean them off the poppy, but even those sorts of programs are now in question.

“Should the international community be working with the Taliban to try to implement alternative livelihoods?” asked Felbab-Brown. “It’s a difficult question and can’t be considered in isolation. It will be part of the bargaining over a whole set of policies, including women’s rights and human rights.”

Uncertainty abounds over what the Taliban’s opium policy will actually look like. In the meantime, the farmers are planting the seeds for next year’s crop right now.

This article was produced by Drug Reporter, a project of the Independent Media Institute.

Phillip Smith is a writing fellow and the editor and chief correspondent of Drug Reporter, a project of the Independent Media Institute. He has been a drug policy journalist for more than two decades. He is the longtime writer and editor of the Drug War Chronicle, the online publication of the nonprofit Stop the Drug War, and was the editor of AlterNet’s coverage of drug policy from 2015 to 2018. He was awarded the Drug Policy Alliance’s Edwin M. Brecher Award for Excellence in Media in 2013.