Pakistan has decided to observe 27th October as Black Day. This was the day when, according to India’s version, it invaded the disputed Jammu and Kashmir State.  India says that Pakistan had earlier entered a lashkar (irregular forces) into Kashmir on 22nd October. But, it is eerie that India never approached the International Court of Justice, as pointed out by Josef Korbel  (the author of the Danger in Kashmir), or the  United Nations (under Chapter VII of the UN Charter) to get Pakistan declared an aggressor. It approached the UN under Chapter VI of the UN charter (mediation). India’s invasion of Kashmir is based on myths .

India claims that ‘Maharaja Hari Singh signed the treaty of accession with the Indian Dominion on October 26, 1947’. As such, India was justified in marching invading Srinagar. . As for the ‘accession instrument’ argument, curious readers may refer to Alastair Lamb’s ‘Incomplete Partition, Kashmir – A disputed legacy 1846-1990’, and ‘Birth of a Tragedy’. 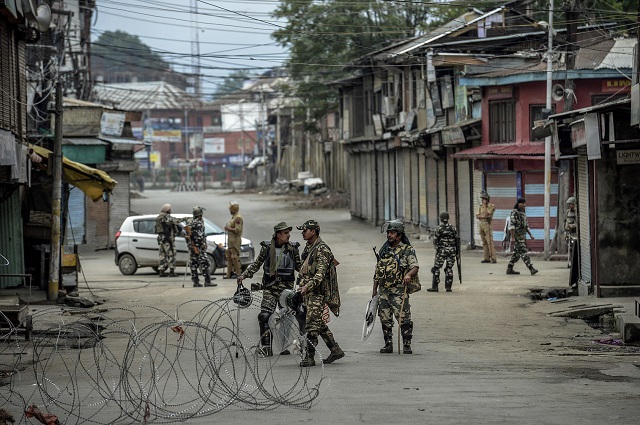 On the question of who the ‘aggressor’ was, the factual position is that India marched its troops into Kashmir without Maharajah’s permission – a blatant act of aggression (Alastair Lamb, ‘Incomplete Partition , Chapter VI: The Accession Crisis. Lamb concludes: ‘According to Wolpert, VP Menon returned to Delhi from Srinagar on the morning of October 26 with no signed Instrument of Accession. Only after the Indian troops had started landing at Srinagar airfield on the morning of October 27 did VP Menon and MC Mahajan set out from Delhi from Jammu. The Instrument of Accession, according to Wolpert, was only signed by Maharaja Sir Hari Singh [if signed at all] after Indian troops had assumed control of the Jammu and Kashmir State’s summer capital, Srinagar.

Lamb regards the so-called Instrument of Accession, ‘signed’ by the maharajah of Kashmir on October 26, 1947, as fraudulent. He argues that the maharajah was travelling by road to Jammu (a distance of over 350 km). How could he sign the instrument while being on the run for the safety of his life? There is no evidence of any contact between him and the Indian emissaries on October 26, 1947. Lamb points out Indian troops had already arrived at and secured Srinagar airfield during the middle of October 1947. On October 26, 1947, a further airlift of thousands of Indian troops to Kashmir took place.

The UN outlawed the ‘accession’; the accession resolution, passed by the occupied Kashmir’s ‘constituent assembly’ is void. Aware of India’s intention to get the ‘Instrument of Accession’ rubber-stamped by the puppet assembly, the Security Council passed two resolutions, Security Council’s Resolution No 9 of March 30, 1951, and confirmatory Resolution No 122 of March 24, 1957, to forestall the ‘foreseeable accession’. It is eerie to note that the ‘Instrument of Accession’ is not registered with the United Nations. India took the Kashmir issue to the UN in 1948 under article 35 of Chapter VI which outlines the means for a peaceful settlement of disputes on Jammu and Kashmir State, not under Chapter VII dubbing Pakistan as ‘aggressor’. India knew at heart that she herself was an aggressor.

India’s prime minister Modi cartographically annexed the disputed state, spurning the UN resolutions and the Simla Accord. Let India know that a state that flouts international treaties is a rogue state: pacta sunt servanda, treaties are to be observed and are binding on parties. Mushtaqur Rehman elaborated why Kashmir is the most dangerous place in the world (Divided Kashmir: Old Problems, New Opportunities for India, Pakistan and the Kashmiri People, 1996, pp. 162-163). No talks, no mediation. That is an open invitation to war, perhaps a nuclear Armageddon.

Mr. Amjed Jaaved has been contributing free lance for over fifty years. His contributions stand published in the leading dailies at home and abroad (Nepal. Bangladesh, Sri Lanka, et. al.). He is author of seven e-books including Terrorism, Jihad, Nukes and other Issues in Focus published by Smashwords.com.