RAB was working to bring the surrendered militants back to normalcy. In very few countries in the world, law enforcement agencies like RAB have shown humanity.

On December 10, 2021, the United States imposed sanctions on seven former and current RAB officers for alleged human rights abuses in Bangladesh. It is a burning issue in Bangladesh now. The Bangladesh government is continuing its efforts to lift the ban. At the same time, it is being seen as a major diplomatic pressure from the United States. 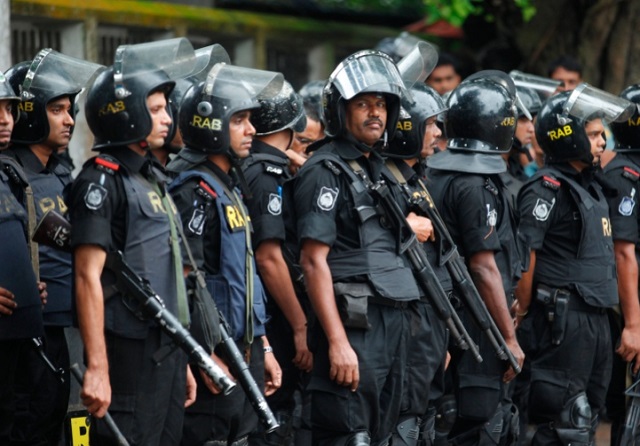 It is pertinent to say that Rapid Action Battalion, abbreviated RAB is a specialized police unit in Bangladesh. RAB was formed in 2004 to maintain peace, harmony, the law in the country. RAB was formed mainly to suppress militancy and terrorism in the country and to improve law and order. After the inauguration, RAB officers were sent to the United States for training. Several RAB officers have received training at the FBI in the United States. A few discussed. The RAB also sought the cooperation of intelligence agencies in the United States to investigate the killings.

Earlier, on July 26, 2004, Hannan, one of the country’s iconic terrorists and one of the 23 top terrorists, was killed in a RAB crossfire in Uttara. The latest RAB has been praised for cracking down on bandits in coastal areas of the country, especially in the Sundarbans. RAB has been playing an important role in preventing all kinds of drugs including the dangerous drug Yaba.

Bangladesh has declared a ‘Zero-tolerance’ policy against terrorism. Bangladesh maintains a “zero tolerance” policy towards terrorism and violent extremism. The RAB is implementing that policy. The role of RAB in controlling terrorism in Bangladesh is positive. The role of RAB has reduced terrorism in Bangladesh. Even, this was stated in a report released by US Secretary of State Anthony Blinken from the US State Department on Thursday night, almost a week after the imposition of sanctions on RAB and its seven former and current top officials.

Regarding Bangladesh, the report said, “Investigations and arrests of terrorism-related incidents in Bangladesh have increased in 2020, while terrorist activities have decreased.”

Another report states that “throughout 2020, the RAB and the Counter Terrorism and Transnational Crime Unit (CTTCU) launched community policing activities and arrests of suspected foreign terrorist fighters, as well as counter-terrorism and rehabilitation programs.”

According to the report, there were three specific terrorist attacks in Bangladesh in 2020. No one was killed in those attacks. In recent years, the Bangladeshi government has denied reports of significant links between local terrorists and international terrorist groups such as IS.

According to the report, Bangladesh has cooperated with the United States in tightening controls at borders and entrances. It further said that the international community is concerned about the security process at Hazrat Shahjalal International Airport in Dhaka. US-trained explosives detector K9 team is ready for security at Dhaka International Airport.

The report mentions Bangladesh’s close cooperation with the International Police Organization. However, it is mentioned that there is no precautionary measure against terrorism in Bangladesh.

After the formation of RAB, the role of this force is huge in suppressing various crimes including terrorism, militancy, piracy and drug eradication. This reliable force has brought one success after another.

Not only the suppression of terrorism but also the protection of human rights, including the reorganization of these forces from the path of terrorism has an important role to play.

According to the media reports, in January this year, nine militant members surrendered at a ceremony at the RAB headquarters in Kurmitola, entitled “On the Path to the New Horizons.” Through de-radicalization and rehabilitation, RAB brought the 9 surrendered militants back to the path of peace and light by giving up the life of terror and extremism. This groundbreaking initiative was implemented after 9 months under the leadership of RAB DG. And through this initiative, RAB wants to change the mentality of the militants. Therefore, the RAB headquarters thinks that it is not possible to eradicate militancy just by bringing it under the law. That is why RAB is applying the theory of ‘de-radicalization’ and ‘rehabilitation’. Concerned people say that RAB’s DT took this initiative to build Bangladesh as a peaceful state. Which is a groundbreaking initiative.

Meanwhile, in the last 18 years since its establishment, the overall capacity of RAB has increased a lot. Apart from suppressing extremist militancy, this police agency has become essential in maintaining law and order in the country. RAB is also conducting effective operations to curb the activities of unscrupulous traders, smuggling, preparation of counterfeit currency and passports and illegal VoIP business. RAB is also successful in suppressing extremists and bandits who destroy peace and order. Following the success of the de-escalation of the Sundarbans, the process of surrendering pirates has been extended to other coastal areas. Following this, 34 bandits of 12 bandits surrendered in the Chittagong coastal region on 12 November last year at Banshkhali, Maheshkhali and Kutubdia in Chittagong with 94 bandits, 94 weapons and more than two thousand rounds of ammunition. RAB has also become a symbol of confidence of the common man in playing its role in the prevention of human trafficking, terrorism and drugs. Assessing the expectations and confidence of the common people, RAB is moving forward at a breakneck pace.

RAB has been established as an elite force in the light of some mandates. RAB has been established to suppress militancy, drugs and terrorism. Today, due to the success of RAB’s campaign, militancy and terrorism have come down to zero in the whole country including the North or the South. The Sundarbans has been freed from piracy due to the RAB’s campaign. Bangladesh has celebrated the third anniversary of the Sundarbans free of pirates this time. No other country in the world has been free of such pirates?

327 members of the 32 bandits had surrendered in the Sundarbans. RAB has also played a humanitarian role in their rehabilitation. In addition to government grants, RAB has provided houses and cows and goats to bring them back to normal life. The pirates of Banshkhali have also been brought back to normal life. During the restriction period in the Covid-19 pandemic, this force worked successfully providing food and medical aid from door to door, facial masks, increasing public awareness etc.

RAB was working to bring the surrendered militants back to normalcy. In very few countries in the world, law enforcement agencies like RAB have shown humanity. RAB has not violated or looted human rights but has been defending them. There are some issues. There might have been some separate incidents. But having despite various challenges and criticism, the force has been working successfully in countering terrorism, illegal drug smuggling, human trafficking, suppressing traditional crimes, etc. But RAB has to do their duty more carefully. They have to remember that any allegations against them can harm their prestige at the international level.

RAB is the first force in the country to conduct dope tests for its members. Dope tests have now been made mandatory in government jobs. In recent times, RAB has been conducting successful activities on various issues including stopping the violence of teenage gangs. In the Corona epidemic the child left his father, the father left his child. In such a situation, the RAB used helicopters to treat the victims and admitted them to the hospital, according to media reports.

According to media reports and RAB officials, Regarding the role of RAB in the crossfire issue, in various operations, people have been killed in RAB firing. When they go on a drug or anti-militant campaign, when they are resisted or after the shooting, the RAB also fires in self-defense. As a result, more than one thousand members of RAB have been maimed. The RAB exchanged fire in self-defense. An executive investigation was launched after the exchange of fire. After proper investigation, it was checked whether the exchange of fire was proper or not. As a human being, you can make mistakes. Strict legal action is taken if not appropriate.

The United States has banned seven former and current RAB officials for alleged human rights abuses. The ban was imposed separately by the US Treasury Department and the State Department on December 10, International Human Rights Day. Former RAB director general Benazir Ahmed is among the officials who came under the ban. He is currently the Inspector General of Police (IGP) of Bangladesh. The United States also aims to curb terrorism, illegal human trafficking and criminal activity. In fact, RAB is implementing the US policy in Bangladesh. RAB is working professionally to fight militancy and the decision by the US will encourage militancy and terrorism in Bangladesh. When Bangladesh is working to ensure the security for the region from terrorism, extremism, separatism etc. a recent inappropriate decision by the US can hamper the situation. When Bangladesh’s law enforcement and security agencies are working to curb extremism, terrorism and separatism to bring peace in the region, the US has imposed sanctions on high officials of security and law enforcement agencies in Bangladesh at this time which is very inappropriate. Thus, we can say that US Sanctions on Bangladesh’s RAB will Impact the Zero-Tolerance Policy of BD Against Counter-terrorism.