Heading towards the huge grey military transport planes are long queues of Afghans. Their lines don’t end but inside the aircraft are also US and NATO evacuation forces and civilians.

The debacle in Iraq, the fall of Saigon, the failed Bay of Pigs invasion of Cuba, now the dilemma of Kabul, all of them had one common feature – a people let down after promises made to protect them. Many of course can debate where exactly the collapse of the 20 year“safeguard operation” by the US and NATO forces in Afghanistan will rank in the list of US military and foreign policy “adventures” of the so called West, which has  now ended in disaster. Many will wonder if this episode could well undermine the credibility of “safeguarding freedom” by the West for generations to come. 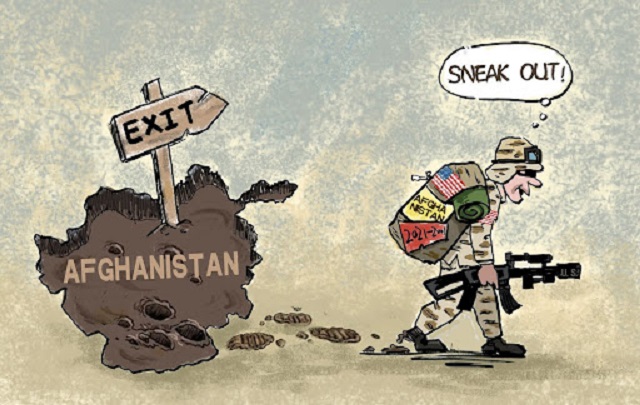 Every so called Western and foreign power, has tried over several decades with all their might withhope to rebuild Afghanistan by force, but got nowhere. Now, the shambolicexit by US and its allies from the country handing power back to the Taliban – the so called“Country Boys” as the West called them, will go down in history.

Hardly can one envisage such a “handover” more ineptly organised, so ineffective and so incoherentinthe extreme.Sadly, such clamour to clear out before the deadline enforced by the US, the end of August 2021,is beyond contemplation.

Heading towards the huge grey military transport planes are long queues of Afghans. Their lines don’t end but inside the aircraft are also US and NATO evacuation forces and civilians.

About 17,000 people have left Afghanistan via Kabul in just one week according to US sources. It is not known how many of them, Afghans both interpreters and other Afghan professionals, graduates, women and children who left their homeland, have been given visas for having worked with international governments and other organisations amid fears they may be targeted by the Taliban.

Outside the gates of the airport we are told, there are another 10,000 or more Afghans hoping to clamour on to a military aircraft in search of “Paradise in the West”. The crush of people, with many women and children who have been left behind, perhaps, abandoned. We also hear that at least 20 people who are known to have died so far.

What is their plight when they reach Britain?

The British military personnel, civilians evacuated and the so called, “Afghan refugees” all    land at the RAF military base at Brize Norton,Oxfordshire. Many British Borough Councils have accepted to take on the refugees in their boroughs after screening them, whilst “Operation Pitting Rescue Mission” continues in Kabul.

Lord Ahmad the Foreign Office Minister directly responsible for South Asia whose responsibilities include Afghanistan, is due to make a statement today 24 August 2021 with other humanitarian partners in London. He is also expected to speak with the UN High Commissioner for Human Rights, Mme Michelle Bachelet.

Lord Ahmad is expected to outline that, “over the past 20 years the UK and NATO allies have worked to promote human rights in Afghanistan for women and girls. That 20 years ago almost no girls went to school and that women were banned from positions of governance. Now 3.6 million Afghan girls are in school and women hold over a quarter of the seats in Afghanistan’s Parliament. Maternal mortality has almost halved and infant mortality has decreased. These gains must not be reversed”. He is expected according to official circles to state the Taliban need to respect Human Rights and fundamental freedoms?

Last week UK supported a UN Security Council Statement which called for all parties to allow immediate, safe and unhindered humanitarian access for humanitarian agencies to provide assistance in Afghanistan.

Whilst this is happening Ben Habib, a researcher has stated that “the Taliban is laughing all the way”. He maintains that the G7 Nations has rendered itself impotent in Afghanistan and indeed in the region. He states: “no one in Afghanistan today cares any longer what the G7 members think. They will not take a blind bit of notice, as what to doabout Afghanistan has

long passed. Bomb them to hell and then put boots on the ground. Deliver them your ideology and democracy down the barrel of a gun. Instead, give Afghanistan and Pakistan a commercial incentive to work with the West and through commerce regain the influence”.

The other view is expressed by the former Conservative Party leader and now MP, Iain Duncan Smith. He maintains that the Taliban won’t change. “This is not a leopard about to change its spots. It is a brutal intolerant organisation that has already been carrying out

The Afghanistan of today is a different country to what it was in 2001. It has regained what it lost 20 years ago, whether we like it or not. Therecan be no doubt about that.