Yembo is traditionally seen as the first incarnation of Yemaya, the intriguing oceanic Mother of All life. Few spirits are more beloved, adopted, co-opted, and assimilated than this one.

Excerpts adapted from the author’s most recent book, Yemaya: Orisha, Goddess, and Queen of the Sea, published by Red wheelweiser

As human beings, we have always sought to give faces and names to the natural and spiritual forces we encounter in order to understand and relate to them, to make them more personal, and to render them less frightening. In Yoruban tradition, these forces are known as orishas. Orishas are not gods or goddesses, in the Western sense. They are more like archangels or higher spirits—intermediaries between mankind and the transcendant forces of the universe. In the mythos of Yorubaland, a region in West Africa that encompasses western and southwestern Nigeria, Benin, Ghana, Togo, and the Gulf of Guinea, the orishas were brought into being by a supreme creator named Olodumare. Since this region is home to many rivers—including the Oba, the Ogun, the Ogunpa, the Omi Osun, the Osun, the Otin, and the Oueme—rivers in particular, and water in general, came to play a large role in the spiritual traditions of the region. Indeed, many Yoruban orishas, including Yemaya, were originally river spirits. 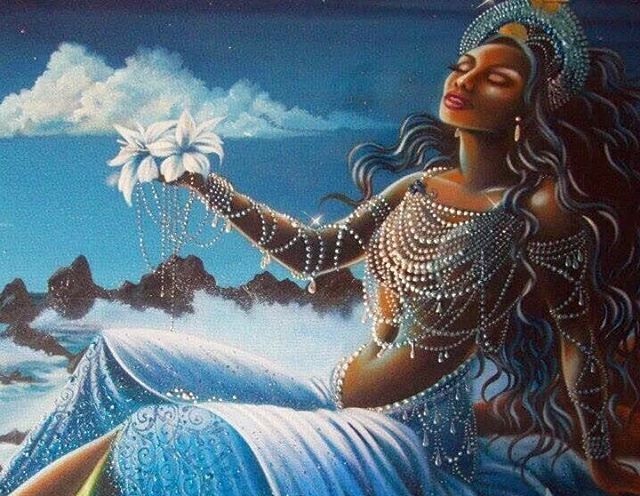 After Olodumare created the earth, gathering up all the dust and particles of matter in the universe, he created a vast hole into which he poured the remaining gasses accumulated during the creation of the planet, forming the first ocean. Immediately, a dark figure arose from the deepest depths, swimming in increasingly rapid circles until it breeched the surface of the water and emerged shining and magnificent. The figure was humanoid from head to waist, with the tail of a great sea serpent. As the spray of the ocean waters hung in the air around it, the figure proclaimed: “I am Olokun, owner of the depths, of the waters.” He then dove back beneath the sea and vanished into the darkness.

As the ocean spray brought forth by Olokun evaporated, it began to rain. When this rain touched the salt water, the spirit Yembo appeared, radiant and regal, glittering with sea salt and clothed in a gown of flowing water. “I am Yembo,” she cried. “Where the light of sun and moon penetrate the water, there is my kingdom to be found.”

Yembo is traditionally seen as the first incarnation of Yemaya, the intriguing oceanic Mother of All life. Few spirits are more beloved, adopted, co-opted, and assimilated than this one. She appears in many different faiths and is called by many different variations of her full name—Ye Omo Eja, “the mother whose children are as numerous as the fish.” In West Africa, she evolved into the goddess Yemaya, whose appearance as Yembo heralded the beginning of the time of the orishas on earth. Many believe that the sojourn of the orishas here will end when hers does. In many traditions, she is considered to have given birth to the first fourteen orishas, as well as to the first humans and the sun and the moon.

She brought the power of procreation into the world, becoming the patroness of pregnant woman and their children, both born and unborn.

After emerging as a West African river goddess, Yemaya left Africa to travel with her children in overcrowded slave ships during the Middle Passage—the transportation of enslaved Africans across the Atlantic Ocean to the Americas that began in 1518 and continued into the mid-19th century—to try to protect them from the horrors to come. She and the orisha Oshun traveled with them across the seas wrapped in the rain in order to watch over them and succor them in their pain and despair. Indeed, so great is Yemaya’s love for her children that no matter where they set foot, no matter how strange or foreign the land, she remains with them to guide and protect them. 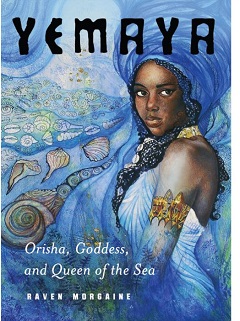 As her praise and worship spread throughout the world, Yemaya’s role expanded and she took control over all the waters of the world—salt water, fresh water (which she shares with her spiritual sister, Oshun, who is sometimes also considered to be her daughter), and the rain that falls from the heavens. She reigns over the water of our bodies—our sweat, our tears, and the amniotic fluids of the womb. Even our blood belongs to her. She is the Thrice-Crowned Queen of earth, sea, and moon.

Yemaya is often depicted as a twin-tailed siren, the link between the conscious and the subconscious, the solid and the liquid. Because of her dominion over the unfathomable depths of the human psyche, her influence is primarily felt on an inner level, but manifests on the physical plane as well. Once we have connected with her, she is truly always with us—inside us, guiding and healing us. Like all mothers, she sees and expects the best in and from us, pushing us to live the best lives we can as the best versions of ourselves. She knows our full potential and does not like to see us squander that potential in pursuit of meaningless goals, bad habits, and laziness. Yemaya works to manifest her own goals twenty-four hours a day and, while she does not expect that from us, she does expect an honest daily effort to strive toward and grow into our full capacity.

Yemaya changes form as she travels the world through the rain. In Egypt, she trades fins for feathers and becomes Isis. In Haiti, she becomes a lunar goddess. In Brazil, she becomes the country’s patron saint. And so, from the cradle of all life, the Ocean Mother spreads her influence wherever living waters flow.

A spiritual artist who has dedicated his life and work to the service of the great mother goddess, Yemaya, Raven Morgaine is a practitioner of Candomblé, New Orleans Voodoo, Santeria, and witchcraft. He is the owner of the Familiar Spirits shop in Coventry, Rhode Island, where he creates and sells the spirit altar dolls for which he is renowned. Raven’s art is on display at the Wonder Woman Museum in Connecticut, and he has been featured in numerous publications and podcasts. He lives in Rhode Island.